“We had an ultimatum, didn’t we? Go our separate ways, do our own thing…” 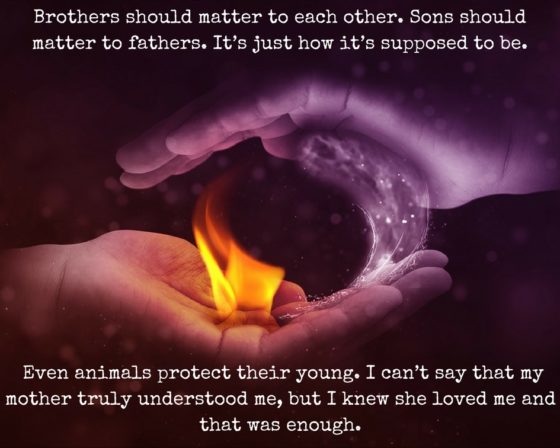 An ARC has been kindly provided by SOURCEBOOKS Fire, via NetGalley.com, in exchange for an honest review.

First of all this story is not “all one thing”. It’s complicated and brutal in its honesty.

The author broaches many difficult topics (alcoholism, death, family ties…) and she does not sugarcoat it. Neither does she trade in pathos. She just writes it like it is with fairness and finesse. I dare you to remain unaffected.

I bet everyone will find something he/she has intimately experienced before. It will trigger memories and raw emotions.

It was hard to read sometimes. Not because it’s boring or the writing is bad. But because I could walk in these boys shoes. I experienced these feelings myself. I lived them as a teenager. All that anger, frustration, disbelief and sadness you can feel for a loved one hell bent on the path of self- destructing  I know them. Intimately.

That’s why I can say with absolute certainty that K.M. Walton did a brilliant job writing this novel.

Some readers experiencing death of family members and friends will also remember painful moments. Did you get closure? Did you part ways on angry words? Did you tell them that you loved them? Did you do everything you could to help them in life?

Saying goodbye is never easy, be it expected or sudden.

Vance and Oscar are waiting for their father to die. He drank himself to death and nothing can be done anymore except ease his suffering at the hospice.

They will soon be orphans as their mother was killed in a car accident years before.

They should help each other only…this is not so easy. They’re about “as messed up as family can be”.

They are so different and haven’t shared anything brotherly for years and years. They don’t understand each other. Resentment is festering between them.

Vance is living. He is action. He is recklessness. The life of the party he is an athlete always ready to have fun with their father, dance on some reggae song or drink to have more than a buzz.

“Playing lacrosse was the best thing on earth. Who wouldn’t like challenging themselves and being awesome at something? Every time I geared up and stepped onto the field, it motivated me to do better, play harder. Nothing beat the smile on Dad’s face when I scored or took a guy out. Lacrosse made me friggin’ happy. Nothing made Oscar happy. All he did was mope around and make everyone around him miserable. With his grouchy attitude, he wouldn’t survive eighth grade”

“Dad and I spoke the same language. Oscar was like an alien.”

Oscar is feelings. He is always listening and thinking.  A loner he loves listening to classical music and drawing in his sketchbook. He is socially awkward. He’s never been a party animal but since his mother’s death he’s become a real recluse. He can’t connect with his dad or with his brother.

“Vance has never understood me—and he never will. Even down to the music I listen to. When we were in middle school, he’d make fun of me because of it. I can still see him playing an imaginary violin with wild, insulting movements, doing everything in his power to look weird. Were Vance and I ever close? I blink and realize the answer. No, we’ve never been close—despite only being ten months apart.”

And he is angry with his father.

“Seeing. Hearing. Loving like I mean it. That’s the man I want to be.”

It was so full of emotions, inner thoughts, regret, hopes and I was surprised when I realized the major part of the story happens within 24 hours.

Around this deathbed, they’ll experience guilt for willing their dad to “just die already”, fear for being orphans and never having anyone else to speak about family memories. They’ll wish for a magic wand, just to do everything over again

Back and forth we go between past and present. The past showing how their family fell apart with their mother’s loss. The present forcing these brothers to make a choice: go their separate ways forever or rekindle their brotherhood. Be a family.

Who would I recommend this book to?

To readers wanting something real, something confrontational about family ties, uneasy love and regrets eating people alive slowly.  To readers unafraid of shedding tears because you’ll cry I can promise you.