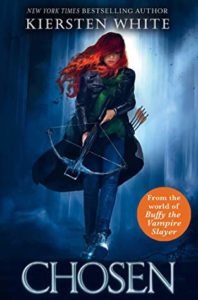 “Will get Buffy fans up in their feels.” —Entertainment Weekly on SlayerNina continues to learn how to use her slayer powers against enemies old and new in this second novel in the New York Times bestselling series from Kiersten White, set in the world of Buffy the Vampire Slayer.

Now that Nina has turned the Watcher’s Castle into a utopia for hurt and lonely demons, she’s still waiting for the utopia part to kick in. With her sister Artemis gone and only a few people remaining at the castle—including her still-distant mother—Nina has her hands full. Plus, though she gained back her Slayer powers from Leo, they’re not feeling quite right after being held by the seriously evil succubus Eve, a.k.a. fake Watcher’s Council member and Leo’s mom.

And while Nina is dealing with the darkness inside, there’s also a new threat on the outside, portended by an odd triangle symbol that seems to be popping up everywhere, in connection with Sean’s demon drug ring as well as someone a bit closer to home. Because one near-apocalypse just isn’t enough, right?

The darkness always finds you. And once again, it’s coming for the Slayer.

This book took me totally by surprise! ⁠

I adored Slayer but here I was lost. The characters are all confused and doubting all the time.⁠

I can usually appreciate characters asking universal questions and wanting to be better. But here I wanted them to …I don’t know. Evolve? Get over it? I can’t pinpoint exactly why this did not work for me here.⁠ It ended up by confusing me and just wanting that something would be more simple!

On the one hand having people doubting and looking for some truth can be great as the characters can evolve but on the other hand, when you “overdo” the self-doubt and questioning it just makes the characters turn round and round, alongside the reader.

Nina is still my favorite character and I loved that she tried to stay connected to her old healer self despite her slayer “aggressive” instincts.  She wants to do what’s right. She wants to invent a new world, a new cooperation between demons and slayers. She wants kind of a universal peace. And that was refreshing as she went against millenia of training and beliefs!That must have been the highlight of that book. Fighting against the genetic makeup to rise above and be the person you want to be. Do the right thing even if it means reining your instinct.⁠

But you can only go so far with that trope.⁠

I hated Artemis and I loathed Honora.⁠ That’s a huge disadvantage for that book as I am first and foremost a character driven reader! I know why Artemis made these choices but well, I thought they were poor choices and that the aim did not justify the means. She should have known better! And yet, I am forgetting that she was young and that being young often means making mistakes. I know! Doesn’t mean that I loved it.

What worked against that book was that one character that I really loved and admired in the first book was a shadow of himself. I can’t say more as I don’t want to spoil your fun. Let’s just say that even if I did understand why, even if there were valid reasons,  it did not help in the enjoyment of the book.

Add to it that Nina’s mom is trying ….mildly to be a mom, finally and I was so frustrated!⁠

I think the big redeeming quality of that story was the humor and banter.  That was something that I loved in Slayer and was delighted to find here. Oh and Doug! He was a great character here.⁠

It really pains me to give a mild rating to this book as I am a big fan of Kiersten White and know that she knows how to read and that I will still read her future books with great enthusiasm. But…maybe I was not in the mood? Or just…it was not for me.

Anyway many readers give it high rating so don’t let my negative review discourage you from reading it especially if you have read and loved Slayer!