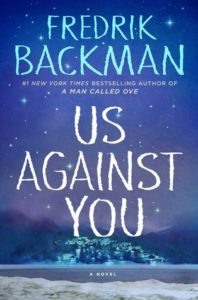 After everything that the citizens of Beartown have gone through, they are struck yet another blow when they hear that their beloved local hockey team will soon be disbanded. What makes it worse is the obvious satisfaction that all the former Beartown players, who now play for a rival team in Hed, take in that fact. Amidst the mounting tension between the two rivals, a surprising newcomer is handpicked to be Beartown’s new hockey coach.Soon a new team starts to take shape around Amat, the fastest player you’ll ever see; Benji, the intense lone wolf; and Vidar, a born-to-be-bad troublemaker. But bringing this team together proves to be a challenge as old bonds are broken, new ones are formed, and the enmity with Hed grows more and more acute.

As the big match approaches, the not-so-innocent pranks and incidents between the communities pile up and their mutual contempt grows deeper. By the time the last game is finally played, a resident of Beartown will be dead, and the people of both towns will be forced to wonder if, after all they’ve been through, the game they love can ever return to something simple and innocent.

Yes I dare say that some passages irritated me as in “when do we get to the heart of the matter really?”. It was like a game of chess: you positioned all your pawns to play the game.
I loved it in Beartown but here I just wanted to rush some parts and I still don’t know why.


Us Against You is a character driven story like Beartown was. Because that’s the human nature with its low and high, its generosity and its greed that IS the topic of the book.
It could be a book about hockey but hockey is simply an excuse to write a story about people triggered to love, to hate, to fight, to become monsters or heroes.

Fredrik Backman’s penmanship is indomitable. He writes short chapters from different point of view. With an economy of word he conveys all the feelings and doubts his character carry with them.
The array of characters ensures that you will either recognize yourself, either your neighbor, your friend or your local politician in one of them.
He shows the inner working of violent men, of mobsters but also shows their childhood, their love for their families, their loyalty for their brothers and you can never hate the bad guy. Except maybe for the politician *does Fredrik Backman has a vendetta against politicians? LOL*.

I admired Peter in Beartown he will disappoint me in us Against You. I will see him as many sees him: a coward. Yet by the end he’ll redeem himself.
I admired Kira the mama bear, the wolf in Beartown and I’ll do it once again here. She also got my commiseration as I know the sacrifices you have to do as a mother and wife.

You could also analyze the story as “The Butterfly Effect” as there will be plenty of events seemingly innocuous but triggering a chain reaction leading to some dramatic events.


This is a hate story. This is a story of a rivalry between two towns but even between the inhabitants within the same town as Maya’s rape in Beartown and Kevin’s departure has left deep scars, dividing the inhabitants.
Some young men will go play for Hed, the rival town, following the coach David while my favorite characters Benji, Bobo and Amat chose to remain loyal to Beartown.
The whole book we’ll see how you don’t go “through” a rape but you live the rape. Again and again and again. Maya’s rape has not only affected her but her parents as they are lots. They could not protect her and are drifting apart. It affected her little brother Leo who feels powerless and filled with rage and hatred. He’ll be pushed toward the wrong crowd. He’ll take risks.

The ripples of the drama grow and grow fueled by other secrets unearthed. They live in Beartown but sometimes you’d think it’s rather Wolftown as people are acting like a pack of wolves, never missing an opportunity to tear the “enemy” apart.

But as hard as they fight they also protect their friends and families with all they’ve got.

I know I don’t speak much about the plot in this review but that’s because you can read the synopsis and the plot is not what’s important in the book. It’s the people. Their feelings. Their reactions. Their joy and their pain. Their secrets. Their love. Their hate. And above all else their resilience.

Have you read it? Or any other Backman’s book?