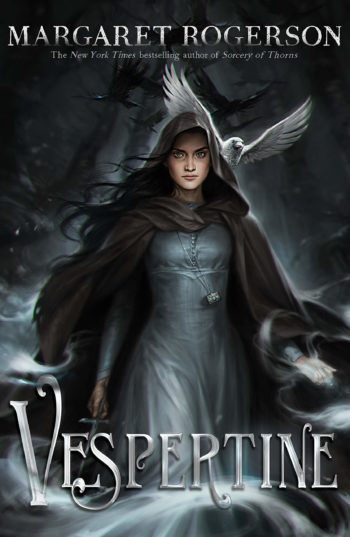 From the New York Times bestselling author of Sorcery of Thorns and An Enchantment of Ravens comes a thrilling new YA fantasy about a teen girl with mythic abilities who must defend her world against restless spirits of the dead.The dead of Loraille do not rest.

Artemisia is training to be a Gray Sister, a nun who cleanses the bodies of the deceased so that their souls can pass on; otherwise, they will rise as spirits with a ravenous hunger for the living. She would rather deal with the dead than the living, who trade whispers about her scarred hands and troubled past.

When her convent is attacked by possessed soldiers, Artemisia defends it by awakening an ancient spirit bound to a saint’s relic. It is a revenant, a malevolent being that threatens to possess her the moment she drops her guard. Wielding its extraordinary power almost consumes her—but death has come to Loraille, and only a vespertine, a priestess trained to wield a high relic, has any chance of stopping it. With all knowledge of vespertines lost to time, Artemisia turns to the last remaining expert for help: the revenant itself.

As she unravels a sinister mystery of saints, secrets, and dark magic, her bond with the revenant grows. And when a hidden evil begins to surface, she discovers that facing this enemy might require her to betray everything she has been taught to believe—if the revenant doesn’t betray her first.

First I want to say a huge thank you to Simon and Shuster for my eGalley or Vespertine! Margaret Rogerson is one of my favorite authors and I wanted to read Vespertine so bad! So yes, thank you!

In her author’s note Margaret Rogerson explained that she struggled to write this book as the world pandemic has affected her mood very hard yet she has delivered a superb story.

It’s true the mood is somber than in Sorcery of Thorns and the banter is darker. But it suits her characters and story perfectly!

I fell into that story from the very first sentence and stayed glued to my Kindle until the very end!

From that first gripping scene we dive head first in a brand-new universe akin to some medieval times. A world where spirits target the sighted to possess their soul and make them their puppets.

A world where the Grey Sisters, Artemisia’s order prepare the dead’s bodies to avoid the birth of dangerous spirits. These sisters are also trained to fight spirits with relics and misericords, these thin blades they wield.

Artemisia has been saved as a child by the Grey Sisters while she was possessed by a spirit. The first year of Artemisia’s life were …horrid. I won’t give details but I cried on her childhood more than once.

Artemisia was a seventeen years old awkward teenager who feels better amidst goats and horses than humans! And yet she’ll always fight for them, bewildered as the story unfold when some people  helped her and treated her with kindness. Her appearance had others fear her and she is used to loneliness.  And yet, a secret part of her will yearn for some warmth and companionship.

When a great danger and unexpected twist of events will force her to use a relic to defend her convent, a very powerful spirit will enter her body and she will be forced to flee confessor Leander. But if she is running away from him, she will also embark on a journey to save her world.

The battle scenes when Artemisia was ruled by the revenant were elating! Like these painting of saints surrounded by bright light fighting evil.

The revenant will be a reluctant ally and the banter between the grumpy, sarcastic spirit and candid, socially clueless Artemisia was a delight!

The revenant, for all his power and threat he posed reminded me of a gruff man, outwardly harsh and cruel but a softie inside.

This was one of the big lessons in this story. How people’s cruelty is often born of loneliness and fear of being rejected. But once you show them you won’t leave them and that you want to be their friends, it’s like the sun peeking behind the clouds.

This gave us unexpected and heartwarming friendships. Artemisia no longer alone, weird as it might be, and the revenant being accepted and cared for in some strange bonding.

Battles, revenants, possession, secrets, unexpected friendships and devouring ambition, you have everything in Vespertine to make it one of my top five books of 2021 once again.

Margaret Rogerson has proven once more that she does know how to write an enthralling and riveting story!