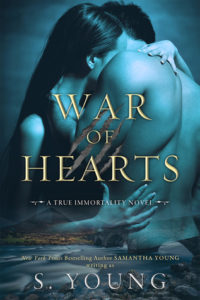 New York Times Bestselling author Samantha Young writing as S. Young.Thea Quinn has no idea what she is. All she knows is that her abilities have been a plague upon her life since she was a child. After years of suffering at the hands of a megalomaniac, Thea escaped and has been on the run ever since.

The leadership and protection of his pack are of the utmost importance to Conall MacLennan, Alpha and Chief of Clan MacLennan, the last werewolf pack in Scotland. Which is why watching his sister slowly die of a lycanthropic disease is emotional torture. When Conall is approached by a businessman who offers a cure for his sister in exchange for the use of Conall’s rare tracking ability, Conall forges an unbreakable contract with him. He has to find and retrieve the key to the cure: dangerous murderer, Thea Quinn.

Thea’s attempts to evade the ruthless werewolf are not only thwarted by the Alpha, but by outside dangers. With no choice but to rely on one another for survival, truths are revealed, intensifying a passionate connection they both fight to resist. At war with themselves and each other, Conall and Thea’s journey to Scotland forces them to face a heartrending choice between love and betrayal.

War of Hearts is a standalone paranormal romance.

Very short review as I have tons of things to catch up with but the most important first: S Young or Samantha Young can give Kresley Cole, Christine Feehan, Nalini Singh and the likes a run for their money!

These are all fantastic PNR authors and you certainly could not tell it was Samantha Young’s first attempt (that I know of) at writing PNR!

You have:
-a mysterious being Thea, who is more powerful than vampires, werewolves etc and hunted for her power;
-a quest to catch Thea (of course it’s the HAWT and powerful alpha Conall on her trail) and to discover what she is;
-killer vampires determined to erase you from existence, witches revering you and a psycho human dead set on capturing you to become immortal;
-a tragic past for our heroine, sole survivor of a plane crash who left her orphaned followed by years of torture;
-a noble Alpha living in Highland (yes yes you can dream about his muscles, power, sexiness, accent an all);
-an “enemies to lovers” romance that will have you in need of cold showers (plural).

So what’s not to like right? And I am adding that I read these more than 400 pages in one day!

Have you read it? Do you like shifter stories?