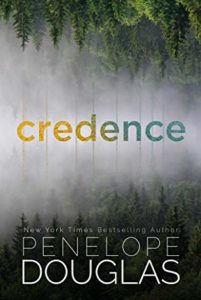 From New York Times bestselling author Penelope Douglas comes a new standalone…Tiernan de Haas doesn’t care about anything anymore. The only child of a film producer and his starlet wife, she’s grown up with wealth and privilege but not love or guidance. Shipped off to boarding schools from an early age, it was still impossible to escape the loneliness and carve out a life of her own. The shadow of her parents’ fame followed her everywhere.

And when they suddenly pass away, she knows she should be devastated. But has anything really changed? She’s always been alone, hasn’t she?

Jake Van der Berg, her father’s stepbrother and her only living relative, assumes guardianship of Tiernan who is still two months shy of eighteen. Sent to live with him and his two sons, Noah and Kaleb, in the mountains of Colorado, Tiernan soon learns that these men now have a say in what she chooses to care and not care about anymore. As the three of them take her under their wing, teach her to work and survive in the remote woods far away from the rest of the world, she slowly finds her place among them.

And as a part of them.

She also realizes that lines blur and rules become easy to break when no one else is watching.

One of them has her.

The other one wants her.

He’s going to keep her.

*Credence is a new adult standalone novel suitable for readers 18+

First let me say upfront that I love Penelope Douglas’s books and that she’s even been so kind to be interviewed for the blog months and months ago.

Second: I won’t rate that book. Because if I had to give a rating based on my liking, I’d give zero or one star max. But I give ratings not only on my like or dislike but also encompassing the book’s writing and the author’s skill. And Penelope did far from a bad job writing wise! It has a plot, it has characters with backstories and that are not unidimensional. It has layers of complexity so the writer DID a good job.
BUT
It just wasn’t my jam.

Third: I don’t mind taboo or age gap or step sibling love/sex or… I also don’t mind BDSM etc. Heck, I loved FSOG and totally shouting it even with so many trashing it these days but I don’t care.
Hence, I don’t think I am a prude or a wilting flower or anything
BUT
I HATE sharing in books. I need exclusivity. I can’t stand love or lust triangle either, even less quadrangle or anything you want to name.
I don’t like menages. I don’t like reverse harem. And I don’t like smut.
And by “I don’t like” I don’t want to offend anyone liking these because I respect everyone’s taste in books! Who am I to judge as I use Funko Pops who are basically dolls as prop for may bookstagrams? Playing doll when I am nearing 50 I don’t think I am in any place to judge others right?

This book hit some hard limits of mine.

And it made me angry…at ME!
Because when I thought that she really was “slutty” I was JUDGING her! Yet I am a woman so that’s totally unacceptable! And I was ashamed of my thoughts, of me.
But honestly, even if it had been a man, I don’t think my thoughts would have been so different.
And then I thought: “Why should I love reading about this? Because of women’s lib and all that jaz???? I can be a liberated woman and not like reading this without being considered as stuck up or anything.
Because …exclusivity is how I roll once again.

I was also very CONFUSED!
Because even if I despised this, I still read it thoroughly till 50%. And it worked ….in some ways. And I was all “Why am I doing this to me????”.

I must confess that after reading it religiously (sorry if this seems blasphemy in this context) till the 50% mark I just jumped till the last chapter and epilogue. To know how it ended.
And then I skimmed back. To see if I could not stand it better. To also have some answers about some past things that just jumping to the conclusion could not give me.
This is certainly also why I won’t rate the book as I don’t feel the right to do it, not having read all the details.

Now I want to bow low to Penelope.
Because she wrote what SHE wanted. What SHE felt. It was not her usual darker genre. The boundaries were exploded. And she did not do a half-hearted job at that (see character’s dimension and backstories above).

Would I recommend it?
If you have similar issues as mine, NO! If I had known this would be the trope for that book I would never have bought it.
But if you don’t need exclusivity. If you like menages, reverse harems. If you like some taboo then hell, GO FOR IT! Because it will totally be your cup of tea and you’ll be in reader’s bliss.

PS: I know that possessiveness and exclusivity surfaced somehow but …too late for me, the damage was done.

Now: let’s talk! Respectfully please. Have you read it? What did you think of it?