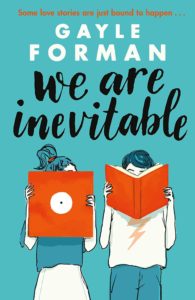 ‘I got this whole-body feeling… it was like a message from future me to present me, telling me that in some way we weren’t just bound to happen, that we had, in some sense, already happened. It felt… inevitable.’

So far, the inevitable hasn’t worked out so well for Aaron Stein.

While his friends have gone to college and moved on with their lives, Aaron’s been left behind in the Cascade Mountains of Washington State, running a failing bookshop with his dad, Ira. What he needs is a lucky break, the good kind of inevitable.

And then he meets Hannah. Incredible Hannah – magical, musical, brave and clever. Could she be the answer? And could they – their relationship, their meeting – possibly be the inevitable Aaron’s been waiting for?

That book wasn’t what I expected.

I expected a romance but I got a book about grief, about what it does to a family  and about addiction.

The romance took a backseat and was in fact barely there.

This was not a bad surprise, just something I didn’t expect and I had to adjust to that new story.

I usually gobble up Gayle’s books but this one was difficult to really fall into.

Probably because it was not what I expected but also because Aaron was so sad and angry. He lashed at everyone. You could see that he had been hurt so deep and dupped so many times by his brother that he didn’t believe in acts of kindness anymore.

He always waited for a Lucy act to Peaton, the betrayal, the backstabbing.

Aaron is living with his father Ira, in an apartment atop their used books bookstore. His mother left months ago after his brother died from what we guess is an overdose.

Aaron always loved reading and is now the owner of the bookstore his parents created.

All along Aaron will compare the bookstore and his life to the extinction of dinosaurs.

Everyone is ordering online and they have no future.

It does not help that his dad, Ira is grieving so deep that you can see that he is physically affected by the grief.

Aaron feels trapped by debts, by despair and does not believe in people anymore.

A chance encounter with Chad, a young guy stuck in a wheelchair after an accident will change his routine and introduce Aaron to an array of interesting characters from Hannah Crew, band singer whom he is falling for to Ike and his mates, lumberjacks determined to restore the bookshop to Bev to…

From that moment on and after a desperate decision, it will seem as if Aaron’s life will spin out of his control.

What made it hard to fall for the story was Aaron’s despair and guarded attitude. He was rebuking people all the time and in doing so, he rebuked me too!

Yet I felt for him as he obviously was hurting but it was hard to want to keep reading when I disagreed with his decisions and attitude.

I finally fell in love with the story once Chad and all the side characters hijacked the plot so much that Aaron finally opened up to others. That was also the time when we dug deep into grief and addiction. All the conflicted feelings and messy thoughts Aaron was plagued with when reliving his brother’s life.

That’s when I began to cry.

Because finally Aaron showed me his pain, he let me truly SEE him. And boy did I cry for him, for his father, for his mom and for his brother.

To sum it up: don’t enter this book hoping for a romance as the center piece but enter it expecting a book about grief and addiction with all their messy emotions and backlash. That part was extremely well done and if you keep that in mind, I think you’ll enjoy it right away, much more than I did.