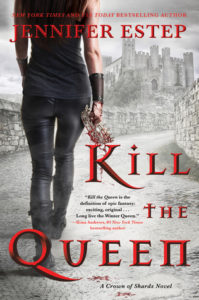 Gladiator meets Game of Thrones: a royal woman becomes a skilled warrior to destroy her murderous cousin, avenge her family, and save her kingdom in this first entry in a dazzling fantasy epic from the New York Times and USA Today bestselling author of the Elemental Assassin series—an enthralling tale that combines magic, murder, intrigue, adventure, and a hint of romance.In a realm where one’s magical power determines one’s worth, Lady Everleigh’s lack of obvious ability relegates her to the shadows of the royal court of Bellona, a kingdom steeped in gladiator tradition. Seventeenth in line for the throne, Evie is nothing more than a ceremonial fixture, overlooked and mostly forgotten.But dark forces are at work inside the palace. When her cousin Vasilia, the crown princess, assassinates her mother the queen and takes the throne by force, Evie is also attacked, along with the rest of the royal family. Luckily for Evie, her secret immunity to magic helps her escape the massacre.

Forced into hiding to survive, she falls in with a gladiator troupe. Though they use their talents to entertain and amuse the masses, the gladiators are actually highly trained warriors skilled in the art of war, especially Lucas Sullivan, a powerful magier with secrets of his own. Uncertain of her future—or if she even has one—Evie begins training with the troupe until she can decide her next move.

But as the bloodthirsty Vasilia exerts her power, pushing Bellona to the brink of war, Evie’s fate becomes clear: she must become a fearsome gladiator herself . . . and kill the queen.

4,25 stars (but the next one will have a higher rating LOL)

OK confession time: I am writing this review days after I finished listening to the audiobook because …I could not wait to go to the new book!

That’s how addictive that series is!

-I recently fell in love with Lauren Fortgang narration through Leigh Bardugo’s books. When I saw she narrated that one it reminded me that …

Let’s begin with the “less” as I always eat what I prefer last on my plate.

The only complaint that I have about this first book in the series is that some passages were slow because the author took the time to describe the palace, the landscape … in short: she built the world.

A good world building is something that I usually enjoy but I was feeling impatient here.

Yet, Jennifer Estep did not begin with lengthy description but interwove them in the various scenes. So it should have worked perfectly but didn’t to the full extent. I still can’t pinpoint why to this day.

Now let’s get to the good!

Evie is the epitome of the underdog. She is the “Nth” remote pretender to Bellona’s throne. Many, many cousins come before her yet by a twist of fate, or rather a bloody massacre, all her relatives will be killed save for her evil mastermind of a cousin Vasilia!

But not only is Evie far in the succession order, she is also a “mut”.

In this magical universe, you have powerful magician called magiers and you have people wielding some magic, weaker magicians and they are called muts.

Worse: the few magic Evie holds isn’t even lightning or mind manipulation or something sounding bad@ss. No. She is “just” immune to magic. She can snuffle magic, extinguish it IF she touches the other magician. Not very impressive right?

Even better: no one knows she is immune to magic. Everyone believes her only magic is her enhanced sense of smell.

She even didn’t know how to wield a sword properly at the beginning of the story despite the Queen’s captain of the guards best training.

-The actions and the fights

They sell this one as fit for GOT fans and they are not far from the mark!

It begins with a bloody massacre or dozens of royals. Then you have the fighting and backstabbing in the arena. And the goal is to kill the new queen. Intersperse weather magier’s attacks here and there, a capture by ogres etc etc.

This is the usual lot of Evie!

Never a dull moment for her. Everyone is after Evie and she really escapes by miracle to all these attacks. Well not a miracle only to be fair. She is a fighter and a protector.

Someone wants her skin? Very well but she plans to go down fighting and kicking!

Of course you’ll have a handsome and badass magier whom Evie will have feelings for.

Even better it will begin as an enemies to not-lover-even-if-they’d-like romance!

Evie will fall for someone that she can’t have. For reasons that I won’t give here as it would be a spoiler. And starcrossed lovers is one of my favorite tropes!

Well I still hope that by the end of the trilogy she’ll end up with him of course!

-The humor and sarcasm

I loved being in Evie’s head and listening to her inner thoughts! She is a master at sarcasm and that’s my favorite kind of humor and heroes in books!

She has great banter with others too but her inner monologues are priceless.

I already listed that she is resourceful, courageous, a fighter and has great humor. But she also is smart, excels at court’s politics and is a true protector at heart. She will never hesitate to endanger her life to save others. What’s not to like right?

And also…all the side characters are well fleshed out and add layers to the story. Plus, don’t start me on Lucaaaaaaaaas! <3 <3 <3 <3

Sorry now I will resume my read of the sequel!