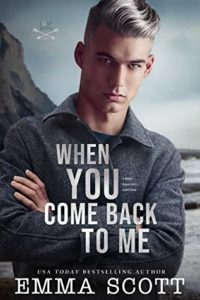 At Santa Cruz Central High School, they called them the misfits, the outcasts, the weirdos. But most of us knew them as the Lost Boys…Holden Parish survived his parents’ horrific attempts to make him “the perfect son.” After a year’s stint in a Swiss sanitarium to recover, he has vowed to never let anything–or anyone–trap him again. Brilliant but broken, he seeks refuge behind alcohol, meaningless sex, and uses his wicked sense of humor to keep people away. He only has to ride out one year in the coastal town of Santa Cruz with his aunt and uncle before he inherits his billions and can make his escape. Disappear.

Falling in love is not in the plans.

River Whitmore. Star quarterback of the Central High football team, Prom King, Mr. Popular, ladies’ man. He leads the perfect life…except it’s all a lie. His father has River’s future in the NFL all planned out, while River’s dream is to run the family business in the town that he loves. But his mother’s illness is tearing the family apart and River is becoming the glue that holds them together. How can he break his father’s heart when it’s already shattering?

River’s carefully-crafted façade explodes when he meets Holden Parish. A guy who dresses in coats and scarves year-round, drinks expensive vodka, and spends his free time breaking into houses for the fun of it. They’re complete opposites. River seeks a quiet life, away from the spotlight. Holden would rather have dental surgery than settle down.

Holden’s demons and River’s responsibilities threaten to keep them apart, while their undeniable attraction crashes them together again and again, growing into something deep and real no matter how they resist.

Until one terrible night changes everything.

#MMromance
Please note, this book contains spoilers for The Girl in the Love Song (less)

My feelings were all over the place while reading Holden and River’s story! When I finished Miller and Violet’s story, I already wrote “I can’t wait for Holden ‘s tale”.

He seemed to suffer so much I wanted to know everything about him. And he also had been saved by Silas from Someday, Someday in the reconversion camp so I needed to know more.

This quote below is just what I thought all along:

“Holden. You deserve to be loved out loud.”

–I highlighted so many quotes and took so many notes that I must have written a second book once finished reading Holden and River’s stories;

-I wanted to open Holden’s brain and take out all these self-loathing thoughts right out of it and replace them with some “self-love” ones;

–I wanted equally to shake River because I wanted him to be out in the open and pat his back because he was such a great steady guy;

–I tried three times to write this review and abandoned all hopes to have something sleek and organized. My heart and brain are just an emotional mess and I can’t sort my thoughts!

So, I will opt for writing the review based on my reactions and notes while reading the book but first, I have pity on you, what’s this story in a nutshell:

Holden Parish is gay and has always been gay.

But his very rich parents couldn’t stand that idea. Early on, they told him he’s been a mistake. And when there is a scandalous event happening to Holden, instead of protecting him, they will send him to a conversion therapy camp in Alaska.

It will be so cruel and inhuman that when it ended Holden will be shipped to a sanatorium in Switzerland!

Now, he is back in the US to begin his last year of high school. He has been sent to his uncle and aunt and he is determined to drink his sorrow and nightmares before fleeing the US with his inheritance once he’ll have finished the year.

River who bears the weight of the world on his shoulder as his mother is dying and he does not want to disappoint his dad.

This book is their story. The push and pull. The duty above pleasure for River. The PTSD for Holden who desperately wants to be loved and not alone but does not think he deserves it.

Now, for my notes and reactions  (no spoiler promise!)

– Poor Holden so alone. Convinced he is toxic and poisons others.

That one came back again and again in the story. I HURT for Holden. And I couldn’t comprehend how people still nowadays, tried to change someone so brutally. How parents couldn’t accept their kid how he was. How savagely these tried to convince him he was nothing and deserved nothing! If I had been a wolf, I would have howled my rage! GAH!!!!

Holden just wants to give his heart. But his parents crushed him. He does not dare hope someone could love him. He is suffering from PTSD. I want to hurt his parents so bad! What person would he have been without the camp? With a loving family?

– River is forcing himself in a suit too tight for him. It’s like you asked a bunny to dabble and be a duck. It will never work. You can’t will you into another person. You can’t make your heart comply with your brain.

And I’m thinking of all the gay who have to pretend and marry and play a role their whole lives in intolerant countries or in the past.

“It’s like everyone assumes we’re all built the same way—as if we have a default setting. If you’re different, you start to believe something’s wrong with you.”

– I love the explanation of James about love! Who knew the chauffeur was a romantic?

“The warning signs are part of the thrill, sir,” James said as he opened the car door for me. “It’s like skiing down a mountain. You’re scared shitless, dodging moguls, the wind whipping through your hair, and adrenaline coursing through your veins. Before you realize it, you’re at the bottom and you don’t remember the fear. Only the exhilaration.” I gaped. “Good grief, James… You’re a romantic.” “I’ve been told, sir.” “A question: what happens if, while you’re racing down the slope, you hit an ice patch, go veering off course and slam into a tree?” “In that case, you hope the ride was worth it.”

-River is steady, Holden is like a shooting star

And that’s where I’ll stop sharing the quotes as I don’t want to spoil you and this review is already so long!

Just know that this read is a roller coaster and you will go through the whole spectrum of emotions. Obviously, you’ll root for these lovebirds but there were so many ordeals, so many fears to conquer, so many doubts to vanquish.

So, before diving in, put a “do not disturb” on the door, buy lost of tissues, some booze and a voodoo doll to unleash your rage onto thinking about Holden’s parents and all the people in the world who are so intolerant they are ready to sacrifice even their flesh and blood for not conforming.

Then, grab a pen or your computer, and try to write a short coherent review. Try being the key word here.

Last word for Emma: thank you for this story and special thank you for bringing back Silas and for that perfect scene at the end!

Do you want to read it now? Say yes please! 😉