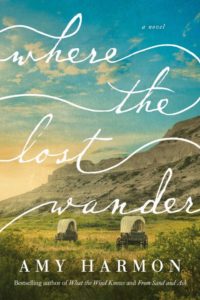 In this epic and haunting love story set on the Oregon Trail, a family and their unlikely protector find their way through peril, uncertainty, and loss.The Overland Trail, 1853: Naomi May never expected to be widowed at twenty. Eager to leave her grief behind, she sets off with her family for a life out West. On the trail, she forms an instant connection with John Lowry, a half-Pawnee man straddling two worlds and a stranger in both.But life in a wagon train is fraught with hardship, fear, and death. Even as John and Naomi are drawn to each other, the trials of the journey and their disparate pasts work to keep them apart. John’s heritage gains them safe passage through hostile territory only to come between them as they seek to build a life together.

When a horrific tragedy strikes, decimating Naomi’s family and separating her from John, the promises they made are all they have left. Ripped apart, they can’t turn back, they can’t go on, and they can’t let go. Both will have to make terrible sacrifices to find each other, save each other, and eventually…make peace with who they are.

This book… this book!

Once again I wrote, rewrote this review and rewrote it once more! I never know how to craft my reviews to convey all the feelings that I get while reading Amy’s stories.

What will I tell you first as I have so many emotions battling inside?

That I was shedding tears on the train, again? Tears of sadness and tears of gratitude.

That Naomi and John were an evidence? Will I talk how they just made sense together?

Or will I tell you that this story is about finding his place in the world when you are from mixed origin? That this heritage will make you extra cautious when you love someone and think really hard, as you  know that people will judge?

Maybe I’ll choose to talk about these pioneers, their courage, their hard life and about the brilliant job Amy did making them feel real?

The truth simply is that this historical fiction is brilliant!

Written with Amy’s beautiful prose it’s also slightly different from her other stories with some true but gritty parts. I respect that Amy did not shy away from some very harsh realities of that time. There is one scene that could be a trigger for some but it’s been written such as to spare us the graphic details. Kind of fade to black if you want but present nonetheless.

I bet all you want that Amy fretted over writing that scene or avoiding it, but I am glad she went all the way as this adds an added layer of authenticity to the story.

Authenticity is a key word.

I could feel that Amy did once more a fantastic job of researching many historical facts. How pioneer’s life was around 1850. What it felt being between two races, Indian and “white”. What motivated people to go on these dangerous adventures. What their hope and dreams were.

The story takes place in 1853 following a caravan of pioneers departing from Missouri and headed to California. We’ll read about mules and horses, jacks and oxen. How people crossed rivers once, twice sometimes more, often in the same day, carrying their belongings, coaxing their mules.

We’ll learn that these pioneers lost weight while traveling as between forts the food could grow scarce. Pregnant women gave birth without any help from a nurse or doctor and were expected to resume their duties quite soon after. If you wanted to wash, you did it either in the pouring rain with your bar of soap, cleaning your family’s clothes, either in the cold river. No hot bath on the way.

Encounters with Indians could go peacefully or become ugly. And when you committed a crime you rarely had a fair trial. Justice was swift and death punishment not uncommon.

This is the wild west Amy wrote about! And she did it splendidly!

But above all else, this is a romance! A love story! And a family story too. It would not be Amy otherwise.

Naomi May is twenty and already widowed.

She is following her parents and her brothers all the way to California. Their wagon train will be guided by Abbott, an experienced guide and accompanied part of the way by his nephew John Lowry.

When John meets Naomi, it will be instant pull between these two unique characters.

Naomi is strong and knows her mind. John thinks …a lot. Too much would tell Naomi.

“Thinking takes time. Feeling . . . not so much. Feeling is instant. It’s reaction. But thinking? Thinking is hard work. Feeling doesn’t take any work at all. I’m not saying it’s wrong. Not saying it’s right either. It just is. How I feel . . . I can’t trust that, not right away, because how I feel today may not be how I feel tomorrow. Most people don’t want to think through things. It’s a whole lot easier not to. But time in the saddle gives a man lots of time to think.”

Naomi is fire. I loved her banter and sharp tongue. Never mean but always funny and somewhat irreverent. Naomi loves drawing. That’s her way to see the world, to express her feelings and to collect memories. Dutiful daughter, I loved the relationship she had with her mother.

Both were strong women. Naomi knows her mind. Knows what she wants. She has been raised by an open-minded mother and John’s mixed blood has no importance whatsoever to her. She sees John, the man, his worth, his strength, his honor, his loyalty and his protectiveness. Naomi is determined to woo John, even if she knows the dance won’t be easy and she is not afraid to tell him her mind.

“That is not the way I want to be kissed,” she says. “No?” “No, I want you to kiss me like you’ve been thinking about it from the moment we met.”

As the synopsis said, a tragedy will strike them and they’ll go through fire in the hope of having a future together.

Told in Amy’s graceful and powerful writing, this love story engulfed me and propelled me into Naomi and John’s hard, uncompromising yet beautiful world. I smiled, I swooned, I cried, I feared, I hurt and I hoped.

A big thank you to the Lake Union Publishing for my copy as I had the privilege and enormous joy to read this story way ahead! As usual, it does not influence my review in the least and this is willingly posted (dang I would boss everyone to read it anyway 😊 ).

Have you read Amy Harmon’s books?