Who rules the world? GIRLS!

I may be an adult but I love reading paranormal or fantasy novels. And not only the adult ones but teen novels too. I swear these did not exist when I was a teen but they’re pure genius! Thanks to this genre I can really escape reality and walk among vampires, shifters, fae etc.

The cherry on top:  these books have very inspiring heroines. You know the ones we call kickass. They are fearless of if they’re frightened they still go for it and give it all. They have bigger b@lls than most male characters, live epic adventure, learn things about themselves… they battle big bad monsters and some even don’t have a stray hair at the end of the fight. Badass!

Or they’re ordinary girls/women thrown into extraordinary circumstances and learning very fast how to survive if they don’t want to be eaten alive by the big bad wolf. Unlike The Red Riding Hood they often save themselves alone or aided by a bunch of sidekicks.

I want to be just like them when I grow up… wait I’m already adult!  😉


So this post is about our favorite female characters in paranormal or fantasy. To liven it up I asked several bloggers to share their favorites too and I’m delighted many agreed to play this game. Here are these fantastic bloggers: @Yomna from from Shristi and Yomna at srishtiandyomna.blogspot    ; @Emily Harris (you can follow her on Twitter at twitter.com/emilyelharris and on Pinterest at pinterest.com/emilyelharris90 );  @Val  Shameless & Bitchy Skanky  Steamy Reads Mrs. Danvers-Tate-Snow   at steamyreads.net  and @Corina from happilyeverafterromancebookreviews.com

You’ll see several heroines have been chosen twice as they seem to be superstar.

Here below is our own selection. Beginning with the choices of my blogger mates  😀 (friends first, always)

Number one: Celaena Sardothien has been chose by Yomma and by Emily Harris.

What’s Yomna is saying about her : 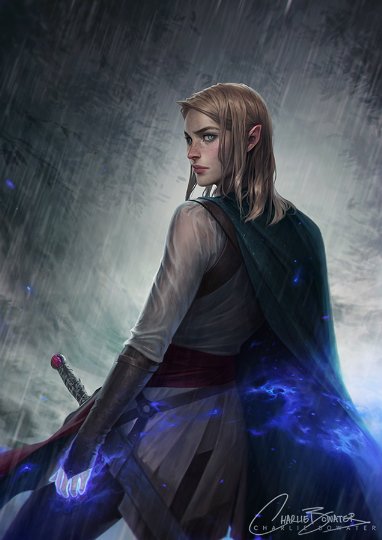 “ Celaena Sardothien is the main protagonist of the Throne of Glass series by Sarah J Maas.
When thinking of words to use to describe Celaena, several come up. This woman is badass, sassy, and undeniably ruthless. She’s fierce (in other words, crazy) about protecting the ones she loves and a character designed to endure the unendurable. The kind of character you throw into impossible situations and expect to survive. Not only does her list of physical skills seemingly not have an end, she’s also got a talent for sass, and has an endless tolerance for suffering.
Underneath her merciless surface is a loving and loyal character humming with strength. On all fronts, she is a character to admire.
I love her because she’s so strong. She goes through the unimaginable and still comes out with a clean conscience. She’s also a very selfless character, and throws herself again and again into dangerous situations for her loved ones.” And you find this gorgeous picture by Charlie Bowater)

Emily Harris is also a huge fan of Celaena and Sarah J. Maas here is what she’s telling us: 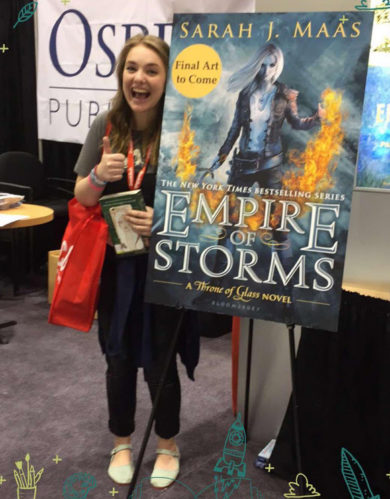 I don’t think I truly knew how bad-ass a woman could be until I read Throne of Glass for the first time. I was in complete awe of Celaena Sardothian. Her character made me feel like I was worth something; like I could conquer the world (in non-fantasy terms, become the president… or something grand like that ). I remember staying up late at night, and re-reading some of the best lines she spoke throughout the series…I would memorize my favorite lines, and speak them out loud to myself in complete wonderment of how strong she was. Celaena Sardothian has made me believe that, as a women, I should not be afraid to make my voice heard. I am forever in debt of Sarah J. Maas for giving me a women I can look up to forever, even if she may be fictional. And look! I met Sarah J. Maas, and very happily posed with Celaena!

Now I’m also a big fan of Celaena!  I want to add my two cents, share my thoughts as well: Celaena/Aelin is one hell of queen warrior. She kills with skills but her heart also bleeds every time she loses a friend or innocent people are hurt in the process. She is an incredible strategist, planning everything in a formidable chess game. I swear she must be some kind of cat as she always escape death at the last moment 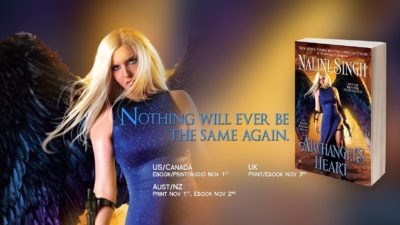 Here’s what Val says about her: “Elena is perhaps my favorite PNR heroine of all time. The world Nalini Singh created in this series in beyond amazing and Elena is the queen of it. She is a hot sexy badass with mad Guild Hunter skills – and she gets to be with my top PNR hero of all time: Raphael, the dead sexy alpha archangel of New York. “ Picture from Nalini Singh series 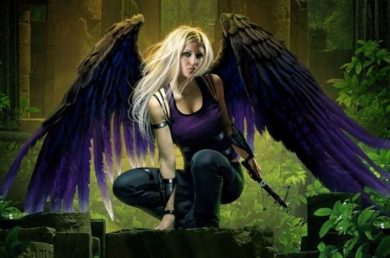 And Corina admires this incredible woman because “Elena is another kick-ass heroine. She is hunterborn, that means she can smell vampires and can track them by scent. This ability brought her to the attention of one scary and powerful archangel.

She is tough as nails, strong-willed and doesn’t let herself being manipulated by anyone, but especially not by her Archangel. I have loved her from the very first book.”


Now I remember reading this series way before writing reviews. I still remember the first scene when Elana had to face with the formidable Archangel on the roof of the skyscraper. He was feared by all but she stood her ground. Courageous, caring, always escaping at the last moment she was indeed an impressive heroine!
Number 3, 4, 5

Yomna’s other choice is none other than Katniss Everdeen!!!! Ladies and Gentlemen let’s The Hunger Games begin! 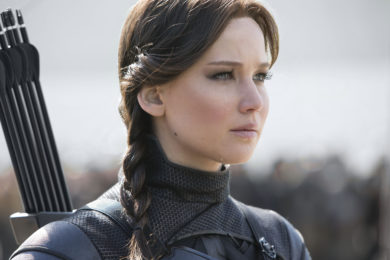 “The Hunger Games – both the books and movies – are my absolute favorite thing in the world. I’ve watched and read every book and movie at least ten times (no exaggeration). So naturally, I had no trouble when going to pick my favorite YA heroine of all time.
I love Katniss Everdeen. From the first time I closed my copy of Mockingjay after reading her last words, I was absolutely in love with her character. She is courageous, compassionate, spunky, and all around fabulous. Her character is genius, and I absolutely can’t count the number of times I’ve cried and laughed with her. “


My thoughts: I must confess I flove Katniss. She’s an ordinary girl forced to make extraordinary choices and becomes the leading face or a revolution she’s never asked for. When you think of it, she just wanted to be left alone with her family. She did not have great plans and dreams and yet…

Emily’s second choice is a well knowns heroine from an adult PNR series turned into a TV series: Sookie Stackhouse from the True Blood series 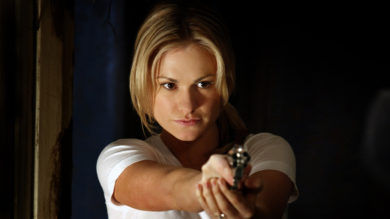 “Now, let’s talk about my girl Sookie Stackhouse from the True Blood series. Though I have only read the first couple of books from the 8 million book series (it sure feels like it), I have seen every episode of the HBO show. Sookie is a sassy, strong women from Louisiana surrounded by creatures that, well, want to kill her. She goes through so many trials, and tribulations throughout the series that lead to a fun, and spooky paranormal-romance read. Sookie Stackhouse is the crazy, independent lady from the south that I see so much of myself in. I am so grateful for her antics. » 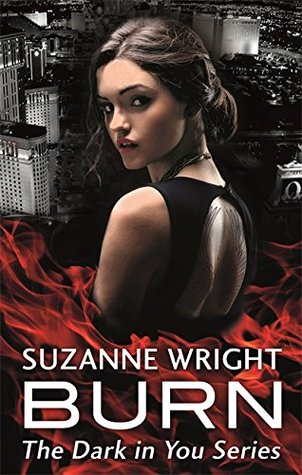 “The first book in this series is perhaps one of my most read and re-read PNR books of all time. Suzanne Wright has a no nonsense, straightforward writing style that I just really love and Harper is a no nonsense, straightforward heroine. She is pragmatic, practical, a little aloof, and puts up with bullshit from no one. In other words, she is a PNR heroine that reminds me most of myself, so of course I dig her.”

And Corina’s two other heroines are:

“She loves to talk trash and can’t abide authority which drives the Beast Lord bonkers. Kate is an amazing sword fighter, goes against everything that goes bump in the night.

She is a special kind of a woman. I don’t think there is another character like Kate out there. And the world will be a sadder place when the series is being concluded. “

Meg Corbyn  from The Others (by Anne Bishop) 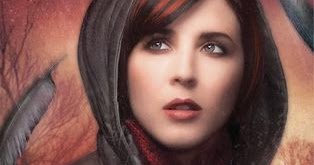 “Meg is a different kind of heroine. She is kick-ass in her own way. A TRAILBLAZER. The first of her kind. She is a cassandra sangue. A blood prophet. She cuts herself to see visions.

After escaping a facility where her visions were sold she has no idea how the real world functions. Meg is pretty much a clean slate, and because of that she sees the world differently. It makes her one fascinating character. «

Now dear readers, I loved many heroines here above but let me introduce you to my own set of badass chicks in Fantasy/PNR

In no particular order…

Lada (or Vlad) from And I Darken by Kiersten White 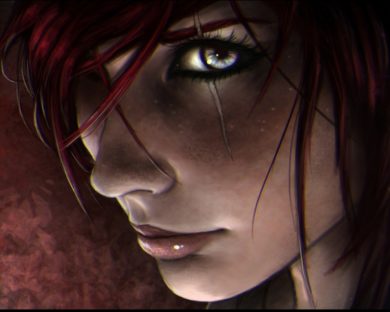 I swoon over Lada’s spunk and utter determination to achieve her dream. She was born a girl hence worthless in this world and century. Her only value was securing alliances through marriage. But she did not want to marry. She wanted to fight like a man. She dreamed of owning Wallachia her homeland. She had a goal and was determined to reach it. She was a girl in a men’s world? So what? She would force them to acknowledge her worth. She has an inner fire and fought tradition to build her own destiny. She was faster, better than most boys. She was contrary and vicious.

I think what I love above all else is her sheer determination. She does not care circumstances are far from ideal. She has a goal and she will reach it, no matter what. She reminded me of myself as I’m working in a men’s world. I’m a tiny (5’’ 2) woman facing big and wide men in business suit and yet I own their respect.

Penryn from AngelFall by Susan Ee 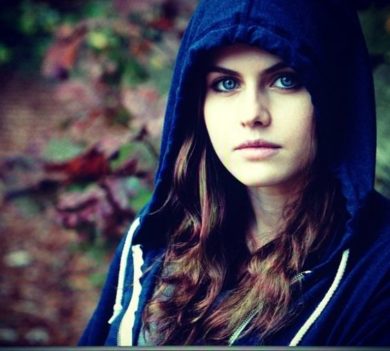 Penryn, the seventeen year old girl who fights for her family and battle with abominations. She is like a modern Joan of Arc: unassuming but a hero nonetheless. Nothing destined her to become a heroine and save her world. But she is incredibly resilient, smart and cunning. Nothing matters more than protecting her family, especially her little sister Paige. And that love will give her wings. She’ll face the big bad angels, fight in the mud, battle hybrid scorpions, face everything and everyone to protect her family.

Penryn has a warrior heart and has learned to wield an angel sword. To wield an angel sword, you must be deemed worthy by said sword as they have some memories and a life of their own. That’s what I love about her: she is plain, unassuming, the girl next door but she’ll become a big baddie kicking Angel’s butts to save everyone.  And who would not love a girl naming an angel sword Pooky Bear right? 😉 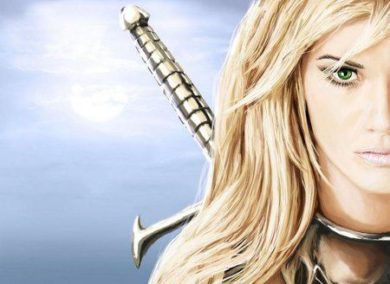 She is a dream heroine, the female version of Jace. Brave, impulsive, passionate, pushing her body to the limits to be better, faster, stronger.  She also is running head first to meet danger. She is an adrenaline junkie. She is deeply loyal and sacrificed herself to take punishment and protect her loved ones. She had to make really hard choices and her last one to protect Julian was so terrible.

I hope you enjoyed our bunch of brilliant female characters and I would love to know what YOUR favorite PNR/fantasy ladies are. So go, shoot!