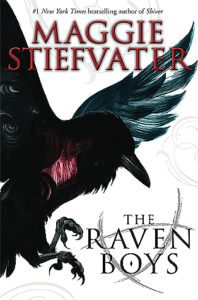 “There are only two reasons a non-seer would see a spirit on St. Mark’s Eve,” Neeve said. “Either you’re his true love . . . or you killed him.”It is freezing in the churchyard, even before the dead arrive.

Every year, Blue Sargent stands next to her clairvoyant mother as the soon-to-be dead walk past. Blue herself never sees them—not until this year, when a boy emerges from the dark and speaks directly to her.

His name is Gansey, and Blue soon discovers that he is a rich student at Aglionby, the local private school. Blue has a policy of staying away from Aglionby boys. Known as Raven Boys, they can only mean trouble.

But Blue is drawn to Gansey, in a way she can’t entirely explain. He has it all—family money, good looks, devoted friends—but he’s looking for much more than that. He is on a quest that has encompassed three other Raven Boys: Adam, the scholarship student who resents all the privilege around him; Ronan, the fierce soul who ranges from anger to despair; and Noah, the taciturn watcher of the four, who notices many things but says very little.

For as long as she can remember, Blue has been warned that she will cause her true love to die. She never thought this would be a problem. But now, as her life becomes caught up in the strange and sinister world of the Raven Boys, she’s not so sure anymore.

From Maggie Stiefvater, the bestselling and acclaimed author of the Shiver trilogy and The Scorpio Races, comes a spellbinding new series where the inevitability of death and the nature of love lead us to a place we’ve never been before.

I finally did it folks!

The Raven Boys was one of my oldest if not the oldest book on my TBR. But when I kept seeing Olivia @oliviascatastrophe on IG answering every question about her favorite book boyfriends with “Adam Parish” I caved and just had to know why he was so great!

It will be very difficult to write this review because Maggie Stiefvater’s books have a soul and an atmosphere!

Every time that I open one of her books I am shrouded in a veil, separated from the real life and wandering in an alternate universe filled with either werewolves, magical horses from the sea or … raven and ghosts!

Reading The Raven Boys was like entering the wardrobe in Narnia.

I entered these boy’s reality and was sucked in their quest.

The plot is pretty simple but precisely executed.

The Raven Boys attend Aglionby private school in Henrietta,  Virginia. Aside Adam they all come from money and drive big muscle cars.

Gansey is their leader.

Son of a congressman he is “filthy rich”, charismatic, always polite, uses big complex words and …sometimes lacks some social skills as he’ll seem condescending to you while really, he would never be disrespectful to anybody.

“My words are unerring tools of destruction, and I’ve come unequipped with the ability to disarm them.”

Gansey “collected” Adam, Ronan and Noah like he would collect puppies.

We don’t have many details as to how their friendship happened but they now are a solid foursome.

I could call him Gansey the Magnifique 😉

Gansey has dedicated his life on finding a buried Welsh king Glendhower.

He is convinced that the king has been moved from England to Virginia and is looking for ley lines and to awaken it.

Gansey is feverish and methodical in his search.

Let’s talk about the other protagonists here.

Adam Parish is what you could call “white trash” but he is determined to become someone. To escape poverty. As he is really smart he could attend Aglionby and has been “adopted” by Gansey.

Adam is the silent type. Thoughtful. Considerate. Polite. A little bit shy and he loves Gansey very much even if he wants to succeed on his own. He does not accept charity.

“When Gansey was polite, it made him powerful. When Adam was polite, he was giving power away.”

Ronan is handsome, rich, traumatized by his father’s death and very angry. At life. At everyone and everything. He does not attend classes and is on the brink to be expelled from Aglionby what Gansey tries to avoid at all costs.

Ronan is the most mysterious and I dare say promising from all the boys. Even if Noah is also quite a mystery. I think I guess what will happen with Ronan. Anyway he is very promising as character.

“We have to be back in three hours,” Ronan said. “I just fed Chainsaw but she’ll need it again.”
“This,” Gansey replied “is precisely why I didn’t want to have a baby with you.”

The last of the boy is Noah. Discreet, silent, always cold Noah. I won’t say more about him.

Aaaand let’s not forget someone very important in this series: Blue!

Blue comes from a long line of psychic women. She lives with her mother Maura and her three aunts: Persephone (ethereal and mysterious), Calla (sexy and belligerent) and Olga (always on the lookout for boyfriends).

One more “aunt” has recently joined them Neeve, a celebrity in the psychic world.

I absolutely adored these women, their dynamic, their bickering, their friendship, their weirdness.

“Are you really going to work in that?” Maura asked.

Blue looked at her clothing. It involved a few thin layering shirts, including one she had altered using a method called shredding. “What’s wrong with it?”
Maura shrugged. “Nothing. I always wanted an eccentric daughter. I just never realised how well my evil plans were working.”

Blue is the only “non psychic” in her family but has a unique talent: she makes things louder! Hence making it easy for a psychic to “hear” something.

Blue will join our four boys in their quest and they will “go on an adventure” bigger than they could have imagined and dangerous too.

As I have said, I love Maggie’s writing as she creates an atmosphere. Mysterious and magical.

I was totally entranced with these characters, their honesty, their passion, their struggles, their mistakes and their friendship.

Now I just want to read the other books!

Have you read it? Do you have a favorite boy?