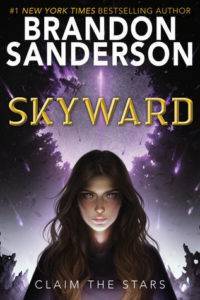 Defeated, crushed, and driven almost to extinction, the remnants of the human race are trapped on a planet that is constantly attacked by mysterious alien starfighters. Spensa, a teenage girl living among them, longs to be a pilot. When she discovers the wreckage of an ancient ship, she realizes this dream might be possible—assuming she can repair the ship, navigate flight school, and (perhaps most importantly) persuade the strange machine to help her. Because this ship, uniquely, appears to have a soul.

I am officially unfriending anyone who did not boss me into reading this story sooner!!!!

Why did no one kick my behind to force me to read it? Seriously?

It was so fantastic that I listened to the end of the book hidden in my garden after some errant that I had to do. I did not enter the house but went silently into the garden, dragged the chaise longue into a hidden corner and listened to the last 30 minutes. Because I could not stop and everyone knows that a mom, once entering her house is ALWAYS welcomed with “Mom! Can you help me please?” or “Darling? Can you come a minute?”.

On my dead body so long as I did not hear the word end!

So what’s it about in a pea pod?

We are on a planet called Detritus where humans crash landed decades ago and have since lived in caverns. Every time they went outside the caverns in big numbers an alien enemy the Krell attacks them from the sky.

Then ten years ago the humans led by Spensa’s father fought back with aircrafts. The Krell retreated that day but Spensa’s father was called a coward as he turned tail and had to be killed.

Humans try to become strong again, to expand and they dream to leave this planet.

All her childhood, Spensa who adored and worshipped her father had to live being called the daughter of a coward.

I loved reading how small Spensa (she really is smaller than most people) had to develop an attitude and bravado to fight back other people. It was amusing to see her constantly bragging and goading bigger people into fights if they disrespected her father or wanted to boss her around or …

Spensa lives with her mother and blind story teller of a grand-mother. To survive and help them earn some money she’s built her own weapon and hunts rats in the caverns. Going far away. Alone in the dark and never frightened!

But her dream is to become a pilot. Like her father. And restore his honor, proving he was NOT a coward.

Not only the exams to become a pilot are extremely hard but the people in power are determined not to have Spensa become a pilot. The game is tricked and she does not hold a chance.

Oooh how I raged when I realized, like Spensa, that they tricked her question sheet and gave her something impossible to do! It was so unfair and I wanted to kick some behind on her behalf!

By some unexpected circumstances she will attend flight school but everything is far from settled!

All along I WAS Spensa!

I was in the mockpit trying to learn to flight and taking hits on my shields, trying incredible and desperate maneuvers! I came toe to toe with Jordan alias Jerkface our flight captain. I cried when some of my friends were killed. I gritted my teeth when G force hit and my skin was peeling from my face under the speed and force.

I was also proud, so proud that I did not go back to my family when lodging on the base was denied but I chose to hide in a cavern with …the very old and beaten up ship I had discovered!

Spensa was a true Defiant.

“You get to choose who you are. Legacy, memories of the past, can serve us well. But we cannot let them define us. When heritage becomes a box instead of an inspiration, it has gone too far.”

That ship had …a soul! M-Bot was talking to me making lame AI jokes.

When the truth came about Spensa’s father, I was hit by doubt and horror like her. Should I flight? Was I worthy to flight? Would I turn like him?

I was swallowed whole by the story.

Living in Skyward’s world for more than 15 hours. The friendship and bonds with Spensa’s flightmates. The great adventure to become a pilot. The questions about what were the Krells and shouldn’t we use a better strategy to beat them? The restoration of M-Bot and the idea that maybe one day it would fly again. The lies, the betrayals but also the loyalty.

And that last battle scene!!!!! OMG! Bonus point for M-Bot “reboot” as he was a real hoot!

“Tremble and fear, all enemies!” he shouted. “For we shall shake the air with thunder and blood! Your doom is imminent!”

Special mention for the narrator Suzy Jackson. She was excellent.

Have you read it? Do you have others to recommend?