I was sighing dreamily so many times! You’ll have cuteness overload. So gooood. 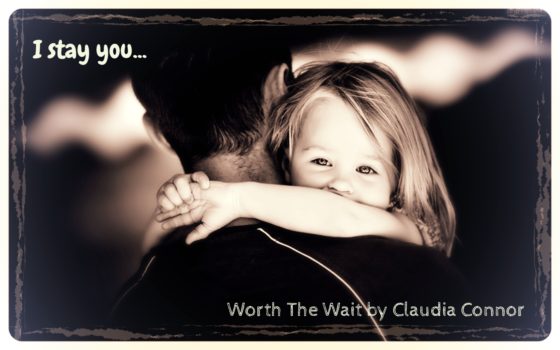 An ARC has been kindly given by the author via NetGalley.com in exchange for an honest review.

I’ve read Worth The Fall one year ago and fell in love with the utter cuteness of this story. With Worth The Wait Claudia Connor has once more written a story filled with wonderful characters but with a sadder undertone.

Nick has lost his parents at eighteen and has decided to raise his younger siblings: three teenage boys and a two-year-old little sister Hannah. He could have chosen to ask his aunt to take them but he could not fathom parting with them.

To say I completely melted when this barely adult Nick protected Hannah with all his might, letting her stay on his knees while he attended classes because she asked him ”I stay you” with “giant tears hanging from golden lashes” would be the understatement of the year! I love when Claudia Connor launches me in the cuteness stratosphere. She is crafty like that and writes heart melting dialogs with little kids. I’m a goner….

Nick is “The Protector”. He would die for his siblings but he carries a massive burden on his shoulders. With no warning, unprepared he had to learn how to run a house, manage teenagers and care for a little girl. This big solemn softie had to learn to make pigtails, put the right shoe on the right foot,  go quick to the bathroom to avoid accidents… All this while building his future.

It was so much and sometimes too much. He made mistakes, especially with his seventeen year old brother Luke.

When he met Mia she was like a breath of fresh air. She was doll-like, gorgeous, steady, dedicated to her studies. They fell in love. Together they acted like parents for Hannah and his brothers. But when a horrible drama hit Hannah Nick thought he failed her and failed everyone. Everyhting exploded. He had nothing left to give to Mia. They could not weather the storm.

Now many years later Mia is back in town while their emotions and feelings are still running high.

I loved this second chance story. Nick is one of these very serious guys, the one needing to be in charge, to have some control. Without this control, he is lost. He was fantastic with his little sister and I had so many cute as pie moments I could not stop sighing. But his strength is also his weakness because he never let go and it cost him his relationship. I had conflicting feelings with him. I adored Nick with Hannah but I was so angry with the pain he inflicted on Mia.

If someone was perfect in this story it was Mia. Mia is an incredible and very endearing character. I imagined her like these girls not overtly shining, not the focal point but discreet, caring, steady and very understanding. She was the tranquil strength Nick needed. She had so much love to give, so much hope and dreams juts to see them crushed dramatically. Nick has been awful with her more than once shattering her heart. I know he was hurt and did not know how to get better but it made me despise him.

I think their story was too much too soon to succeed the first time. They had so much on their plate and could not be just young and free.

But that’s life. Bad timing happens. Near misses.  Mistakes. We hurt those we love most. The journey is as important as the destination.

-big hot protective guys and beautiful inside out female character;

-utter cuteness thanks to big brother protecting his little sister (see quote below);

-second chance stories with some angst but not unbearably so;

-a sneak peek into Abby and Matt happy ever after (I loved it!!!)

Don’t look further this is your next read.

Now just for my and your own pleasure, here comes some tender and fiercely protective brotherly love: this scene is when Nick is sitting in the auditorium soon after their parent’s death

“The high-pitched wail wasn’t his two-year-old sister’s hurt cry. It was her scared cry, with a touch of pissed off.(…) He was up, out of his seat, and halfway down the auditorium stairs before his professor laid his pen down. Nick’s eyes narrowed on the young blonde in an oversized sweatshirt with silk Greek letters sewn on the front. She held a sobbing Hannah dressed in the sunny yellow sundress he’d picked out that morning. She hadn’t been crying when he’d left her. Now her eyes were red, and snot mixed with tears dripped into her mouth. She lunged for him and he caught her against his chest. His heart squeezed like it always did when she held on to him, but especially when she cried. “I stay you”, Hannah said, each word tumbling out of her with a jerk of her tiny shoulders.”

Another quote I loved, all moms will appreciate its wisdom!

You don’t have the right to know everything anymore. That is the sad truth, the double-edged sword of being a parent, I guess. They’re yours to take care of until one day you’re not allowed to anymore