The love of Amelia’s life is dead…but is Ty really gone forever?
After Ty bled out in Amelia’s arms, the disappearance of his body sparked an unlikely union between mortal enemies to uncover what happened and if the lycan-hybrid is still alive—even though alive no longer has the same definition.

The Royal Vampire Council will take all necessary measures to protect Amelia, their vampire Oracle. The blooded daughter of a traitor, she is forced into seclusion from the human world to the Armaya—the vampires’ hidden Alaskan complex where even those in power have a hierarchy to answer to. The threat of the damned is escalating, and no royal is safe from the growing danger.

With her loyal best friend, Kendrick, at her side, Amelia will commit any act to uncover the story behind Ty’s disappearance. The only chance Amelia has to save her lost love is by learning to control her secret abilities—abilities gained through the engineered blood in Amelia’s veins. But as her chances of finding Ty alive dwindle, her feelings for Kendrick begin to grow.

Powers, obligation, budding love, and lost love. There are battles to be won, but is the life Amelia’s fighting for already six-feet under?

Warning – This book contains some language and sexual situations. 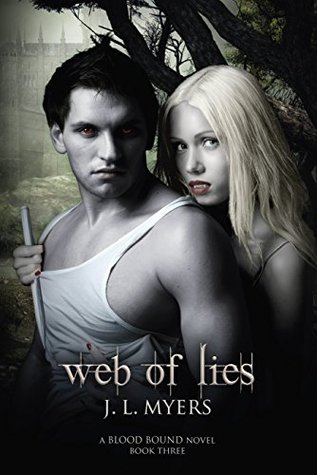 You could not find a better title! What a web of lies indeed. 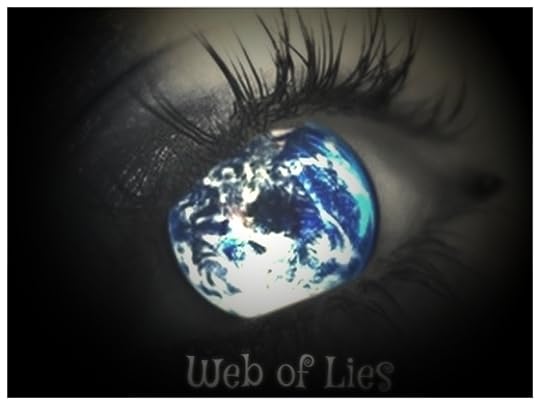 I adored this book. It’s the third of this series and it gets better and better. I truly wish JL Myers was better known as I have a blast each and every time I read her books.

So I’ll do my best to share all that I went through reading this book and maybe, you’ll become a fan yourself.

This is the third installment in her series Blood Bound. The series should be read in order as the books are no standalones.
It begins where the second book left us. Amelia is looking for Ty, hoping desperately he is not dead and ready to save him if he is damned. She really is depressed and has more than a hard time coping with her loss.

” I wanted the physical pain to stay, to amplify my emotional agony. Why should I feel any kind of okay when Ty was dead? That recurring bout of rage built back up, that feeling of being powerless, of drowning and having no surface to swim to. The only break I got from the suffocating depression.”

She also feels guilty as her need for pure blood is growing. She did not want to break her word and feed from a life source. Only with Ty should she do it. But her body is changing she is barely surviving on bagged human blood, it’s not enough to crave her hunger. She is starving, her strength is depleting and this is pure torture for Kendrick to witness.

Throughout the book, she’ll go hunting the damned with Kendrick, Dorian and Vanessa, always hoping to find Ty.

I had so many mixed feelings regarding Kendrick. I resented him in the beginning as he is in love with Amelia and he was alive whereas Ty was not. With his constant support, he pushed her to feel something else for him and I did not like it as I’m Ty’s Team. And I usually can’t stand love triangle.
But I also pitied him. He was hurting as Amelia loves Ty so much and I reckon Kendrick is a fantastic guy. He deserves someone loving him unconditionally. Whatever Amelia did, whomever Amelia chose, he always had her back, even if he had to suppress his want and be the second.

”Why are you doing this?” A ghost of a smile curved his mouth. His gaze returned to mine, warmth radiating from his silver-blue eyes. “Because I love you, Amelia. I want you to be happy. In whatever way that comes.”

My feelings went from resentment to pity to admiration to sadness. I’m now nearly Kendrick’s team, a not so difficult feat after all what happened with Ty in this book.

But I don’t want to say too much and spoil your fun.

Let’s just say my head was reeling with possibilities and questions:
– Who was commanding the damned? Caius? Marcus? Kendrick (what is he hiding in the catacombs?) Dorian? Someone else?

– Could Amelia really heal the damned? How?

– Who was her twin? Marcus as he is absorbing her power? Not Kendrick please, it would just be gross!

– Was Ty “alive” or was Amelia losing her mind when she spotted him or felt his presence?

I loved the action packed story. You have many fights, twists and turns, races for your life and I was always holding my breath and hoping he or she would be saved at the last moment. I loved reading the clues and trying to guess who was who and who did what, always wondering if I was right.
I also love Amelia. She is an incredibly strong girl, constantly fighting her needs as she wants to be better than what Caius destined her to be. Smart, determined and deeply loyal, she is a kickass heroine. I was overwhelmed by all her feelings: love, sadness, grief, guilt, anger…

I was so deeply immersed in this book I nearly missed my stop on the train.

Web of Lies is an epic story, full of love, lies, betrayals, battles and incredible characters. If you like vampire and shifter novels, don’t hesitate and give this series a chance as I think J.L Myers could be the next upcoming author given the opportunity. She is as good as Richelle Mead and the likes in my books.