These Royals will ruin you.

Easton Royal has it all: looks, money, intelligence. His goal in life is to have as much fun as possible. He never thinks about the consequences because he doesn’t have to.

Until Hartley Wright appears, shaking up his easy life. She’s the one girl who’s said no, despite being attracted to him. Easton can’t figure her out and that makes her all the more irresistible.

Hartley doesn’t want him. She says he needs to grow up.

Rivals. Rules. Regrets. For the first time in Easton’s life, wearing a Royal crown isn’t enough. He’s about to learn that the higher you start, the harder you fall. 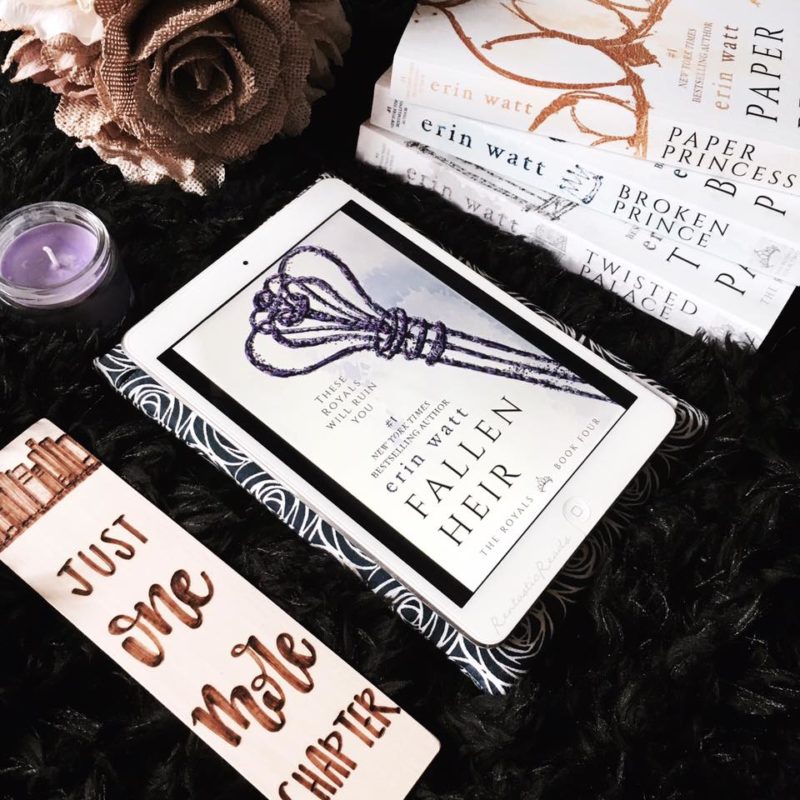 The title says it all : Easton will screw up repeatedly and monumentally. Prepare to see him fall rock bottom. Ends on a huge cliffhanger. Really, really huge. I already told in Erin Watt’s interview that they loved torturing us well they are true to their reputation in this one.

Now that I’ve let loose some steam let’s get to the heart of the matter: the story.

Fallen Heir is the fourth book in the Royals series. It can’t be read as a standalone so if you have not already read the first books just ask for your birthday money or Christmas or… and GO BUY THESE DAMN ADDICTIVE BOOKS!

If you already have read them you know who Easton is and probably love this rambunctious guy. Easton is the charming Royal that loves to party and have a good time. He leaves seriousness to his older brothers the brooding Gideon and Reed. The youngest, the twin, don’t make much wave aside their need to share the same girl (I wanted to kick Lauren’s spoiled b@tt so much!).

In this book he really did not want to be serious and grow up. Peter Pan syndrom?

Easton is “the middle child “and has always felt alone. He was his mom’s favorite and carries huge guilt for her death as she took his pills to kill herself. Add to it that he is extremely smart but has a hard time concentrating always antsy like most ADHD kids and you have a receipt for addiction.

His brothers and Elle really love him and ask him to tone down his drinking but… that’s not so easy.

Until this book I really liked Easton. He was second favorite to Reed.

Now I must honestly say that I wanted to throttle him countless times in this story as he made mistakes upon mistakes.

He fell from the pedestal I placed him in the previous books.

I know he is lonely. I know he can’t help being impulsive. I know if he is self-centered he does not want to hurt others. But each time he felt low or emotional he drank. Each and every time this happened someone got hurt.

“You’ve caused me nothing but trouble from the moment I met you. So, please, for the love of God, don’t try to help anymore. Don’t help, and definitely don’t fix. You’re not capable of fixing things.” Sadly, she shakes her head. “All you do is break them.”

Why did he not stop drinking!!!! I was really frustrated.

BUT that’s the beauty of it. It’s what really happens with addicts. So I would say Erin Watt built a perfectly believable story around Easton’s personality and problems.

Hartley is secretive. I had a hard time connecting with her really as we get only Easton’s POV and the girl has walls higher, thicker than the Great Wall of China! She is a tiny but spunky girl! Hartley keeps turning down Easton and he sees her as a challenge. That’s another thing that frustrated me. He really thought all the time about him, his want, his need never about what the others want.

Easton is determined to win the girl and will play by her friendship rules.

I loved that Hartley did not want a relationship with him. I think it was the only way to help Easton grow up. For once in his life he had to work to have something! He was the first surprise to realize he needed a friend.

“If hanging with Hartley made me deep dive into an emotional pit that would swallow me whole, I’d get off that ride. But being with her makes me feel good. She’s funny, doesn’t take much shit from me, and…I feel like she needs me. No one has ever really needed me. Ella needed Reed. My mom needed pills and booze. The twins have each other. Hartley is alone. And there’s something about her loneliness that strikes a chord in me.”

If Easton frustrated me and Hartley was difficult to grasp I did love the banter! When you read things like:

“I might be small, but I have the lung capacity of a whale, so if you don’t move I’m gonna have to release the oral Kraken until the entire school is in this hallway rescuing me from you.”

You can’t help but have a big smile on your face!

I also loved the school drama, the catty girls, the mystery surrounding Hartley and her family.

I’m convinced this is the setting for Easton’s evolution. With all the pain all the drama he caused with his careless and reckless behavior he has no choice than to grow up or be gone forever.

Poor Easton as his past and “condition” make it harder to walk the line but on the other hand he IS accountable for what happened.

So now I can’t wait to know if he’ll mature or crash and burn down for good. January can’t come soon enough. 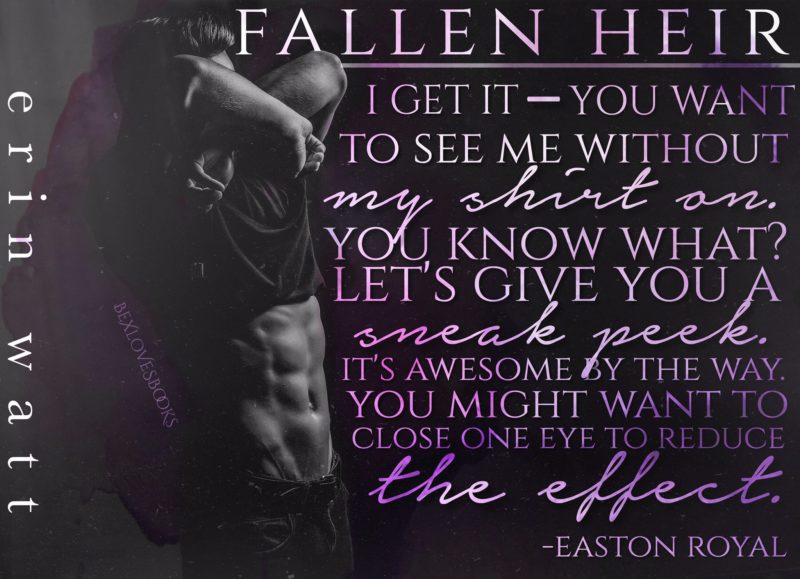