What if you could spend one last day with someone you lost?

One day Carver Briggs had it all—three best friends, a supportive family, and a reputation as a talented writer at his high school, Nashville Academy for the Arts.

The next day he lost it all when he sent a simple text to his friend Mars, right before Mars, Eli, and Blake were killed in a car crash.

Now Carver can’t stop blaming himself for the accident, and he’s not the only one. Eli’s twin sister is trying to freeze him out of school with her death-ray stare. And Mars’s father, a powerful judge, is pressuring the district attorney to open a criminal investigation into Carver’s actions.

Luckily, Carver has some unexpected allies: Eli’s girlfriend, the only person to stand by him at school; Dr. Mendez, his new therapist; and Blake’s grandmother, who asks Carver to spend a Goodbye Day with her to share their memories and say a proper goodbye to his friend.

Soon the other families are asking for a Goodbye Day with Carver, but he’s unsure of their motives. Will they all be able to make peace with their losses, or will these Goodbye Days bring Carver one step closer to a complete breakdown or—even worse—prison?

“I’ve heard that people who lose a limb have a “phantom limb,” which itches and senses pain as though their body’s forgotten that it’s gone. I have a trinity of phantoms.”

Ugh, I don’t know if I was hormonal (I’m a girl so it happens), an easy cryer (might be) or if this book was extremely emotional (undoubtedly) but I cried buckets while reading Goodbye Days.

I was on the train and big fat tears kept falling on my cheeks, along my neck… I was sniffling all the time (how gracious I know). I tried every trick I know: looking at the ceiling to try avoiding the tears; blowing my nose at the slightest inkling of water; chanting “this is not true, this is fiction, Carver/Blade does NOT exist”; telling myself to “breathe in, breath out, blow slowly….” NOTHING WORKED.

By the end of the book I had puffy red eyes and a congested nose. As I read till the wee hours to finish the story I was sporting slits for eyes the morning after and yawning all the time at work.

Jeff Zentner with his Goodbye Days opened my chest, tore my heart out and scattered the remaining pieces all around the floor.

Blade/Carver had lost his tree best friends, the Sauce Crew in a car accident and he HURT all the time. Worse he was texting the driver just before the accident happened and he feels guilty. He is drowning in guilt. Not only survivor guilt but “maybe murderer of your best friends” guilt.

The “beat me up”, despise me because I’m undeserving of forgiveness guilt.

All along when I witnessed people conspiring against Blade, be it Adair Eli’s twin sister, Eli’s dad or Mars’s father JudgeEdward  I really wanted to shout: open your eyes guys! Maybe he sent that text but the driver was a fool. He could choose not to answer while driving. He could have been careful and wise! It’s not Blade’s fault it’s Mars fault! How could they not see it? I was beyond rightfully indignant. I was MAD at these people.

Now I guess it’s easier to blame someone alive than a dead guy. With Blade they had an outlet. They could throw all their anger and grief to his head. They could hurt him as much as they were hurting. They could…

And Blade was crumbling under the sorrow, the guilt, the grief. He had panic attacks. He wanted to disappear. 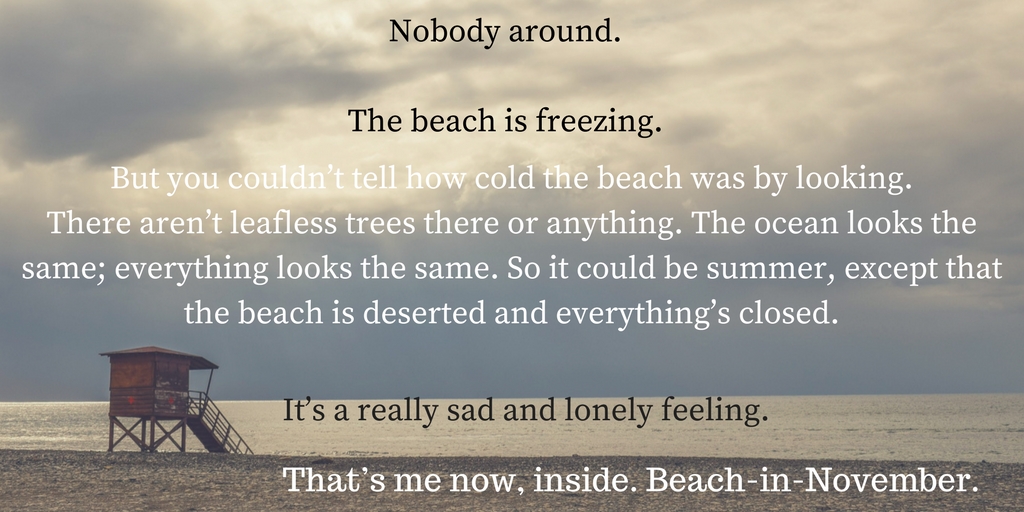 This story addresses the topic of grief. All the ways people use to cope with grief. The sorrow, the anger, the acceptance and then the forgiveness.

The goodbye days were beautiful sometimes, dreadful other times or a harsh catharsis.

Blade was a generous and vulnerable character. He was gutted by what happened and wore his heart on his sleeve. Jesmyn helped him cope with the grief and she was a lovely character as well but Blade has a rare uniqueness in his frailty and honesty.

I loved Nana Betsy her strength and generosity.

I loved Georgia she was a kickass big sister.

I loved reading about Sauce Crew and their pranks.  I was baffled when I read what happened to Blake and realize he still had not a bad word about anyone.

I loved Jeff Zentner’s writing, so realistic, sensitive and vivid. It hit every cranny and nook in my soul. It made me bleed out.

I loved…everything. I can’t fault a thing in this book. Because it made me feel. It made me hurt and smile sometimes. It made me fear the worse. It made me forget my world and live in Blade’s heavy world for some hours. That’s what I expect from books: to make me travel and experience other’s lives. To make me ponder and think on hard topics.

Jeff Zentner turned my world upside down and I need to recover.

Oh and replenish my stock of tissues.

And invest in waterproof mascara.

And sleep some more.

Some of my favorite quotes (among many of them)

“Our minds seek causality because it suggests an order to the universe that may not actually exist, even if you believe in some higher power. Many people would prefer to accept an undue share of blame for a tragic event than concede that there’s no order to things. Chaos is frightening. A capricious existence where bad things happen to good people for no discernible reason is frightening.” It is certainly that. “Pareidolia,” I say. “Come again?” “Pareidolia. One of my favorite words. It’s when your mind sees a pattern you recognize where there isn’t one. Like seeing a face in the moon. Or shapes in clouds.”

“Nobody around. The beach is freezing. But you couldn’t tell how cold the beach was by looking. There aren’t leafless trees there or anything. The ocean looks the same; everything looks the same. So it could be summer, except that the beach is deserted and everything’s closed. It’s a really sad and lonely feeling.” “That’s me now, inside. Beach-in-November.”

Today was cathartic in the way of a vigorous puking session. You don’t feel good, exactly. Just purged of something.