In a land ruled and shaped by violent magical storms, power lies with those who control them.

Aurora Pavan comes from one of the oldest Stormling families in existence. Long ago, the ungifted pledged fealty and service to her family in exchange for safe haven, and a kingdom was carved out from the wildlands and sustained by magic capable of repelling the world’s deadliest foes. As the sole heir of Pavan, Aurora’s been groomed to be the perfect queen. She’s intelligent and brave and honorable. But she’s yet to show any trace of the magic she’ll need to protect her people.

To keep her secret and save her crown, Aurora’s mother arranges for her to marry a dark and brooding Stormling prince from another kingdom. At first, the prince seems like the perfect solution to all her problems. He’ll guarantee her spot as the next queen and be the champion her people need to remain safe. But the more secrets Aurora uncovers about him, the more a future with him frightens her. When she dons a disguise and sneaks out of the palace one night to spy on him, she stumbles upon a black market dealing in the very thing she lacks—storm magic. And the people selling it? They’re not Stormlings. They’re storm hunters.

Legend says that her ancestors first gained their magic by facing a storm and stealing part of its essence. And when a handsome young storm hunter reveals he was born without magic, but possesses it now, Aurora realizes there’s a third option for her future besides ruin or marriage.

She might not have magic now, but she can steal it if she’s brave enough.

Challenge a tempest. Survive it. And you become its master. 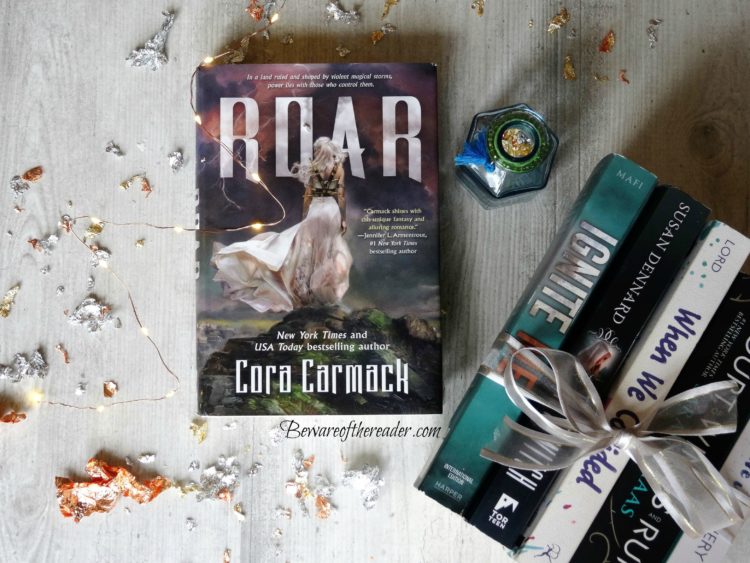 First Cora Carmack’s YA book. She said in her acknowledgements that her favorite genre to read since she was a teenager is fantasy. She took 10 years to write ROAR and I HOPE THE SEQUEL WILL COME BEFORE ANOTHER  10 YEARS!!!!

I really wanted to read this book because it was making the buzz among bloggers and I also fell in love with the cover! Cover junkie that’s me 😉

First because the concept is original.

I had never read a book about storms masters so far.

In this story the land can be battered by storms, destroying cities, burning the grounds and drowning people. Stormlings are gifted humans, usually part of the nobility or royalty. They are able to destroy storms, stealing and capturing their hearts. How mesmerizing is that right?

Second I loved that the heroine is “ungifted”. Aurora/Rora/Roar is heiress of a kingdom and should be a powerful stormling except that she hasn’t manifested any power so far.

I love when female characters have to develop other abilities to compensate for what others find lacking. What Roar did not possess in ability she made for in training with soldiers. Throwing knives, hand to hand combat, knowledge … she was fierce and determined to prove her kingdom she could be worthy.

I know most will root for loyal and brave Locke. But I suspect Cassius is not who he wants everyone to think he is. I love characters in shades of grey and I bet Cassius fits the bill. I only regret that we’ve read so little about him.

Fourth this is kind of a “discover yourself and grow to be who you are meant to be” kind of book (see Shanah I’ve avoided the “coming of age” you despise so much LOL).

It’s a personal quest for Rora. I loved her character’s development. She went from relatively sheltered and shy princess to brave huntress.

Fifth…of course there is a Big SURPRISE that I won’t speak about by the end. 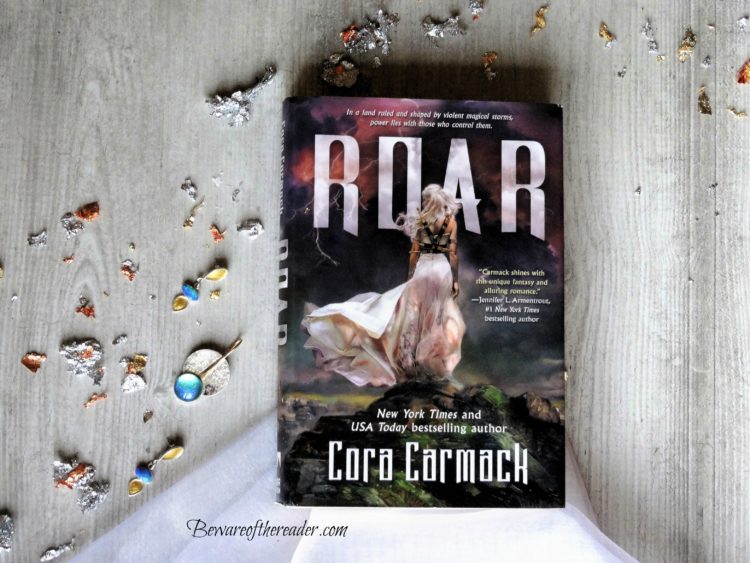 So why not five stars?

I would have loved reading more about Cassius for one.

Second I do prefer when side characters like Jinn, Ransom, etc. have their own stories and subplot as well. Lastly because I liked Roar but I did not love her. There is just a little something preventing me to really connect with her and walk in her shoes.

I can’t pinpoint what exactly is lacking but I’m not totally immersed in her personality. Maybe because she is “all over the place and has many personalities: shy, secretive in the beginning , proud, tenacious  by the end but in the meantime she doubt about her worth.

Will I read the second book? Absolutely.

Would I recommend it? Yes!