Winning what you want may cost you everything you love.

As a general’s daughter in a vast empire that revels in war and enslaves those it conquers, seventeen-year-old Kestrel has two choices: she can join the military or get married. But Kestrel has other intentions. One day, she is startled to find a kindred spirit in a young slave up for auction.

Arin’s eyes seem to defy everything and everyone. Following her instinct, Kestrel buys him—with unexpected consequences. It’s not long before she has to hide her growing love for Arin. But he, too, has a secret, and Kestrel quickly learns that the price she paid for a fellow human is much higher than she ever could have imagined.

Set in a richly imagined new world, The Winner’s Curse by Marie Rutkoski is a story of deadly games where everything is at stake, and the gamble is whether you will keep your head or lose your heart.

The writing is smooth and elegant. The “ladies” use proper language, there is no cursing and the society is strictly build with strong rules and etiquette.
With the subtle balance between depiction and dialogs the author paints a vivid universe and realistic characters.

This is a story of a winning turned in a curse. 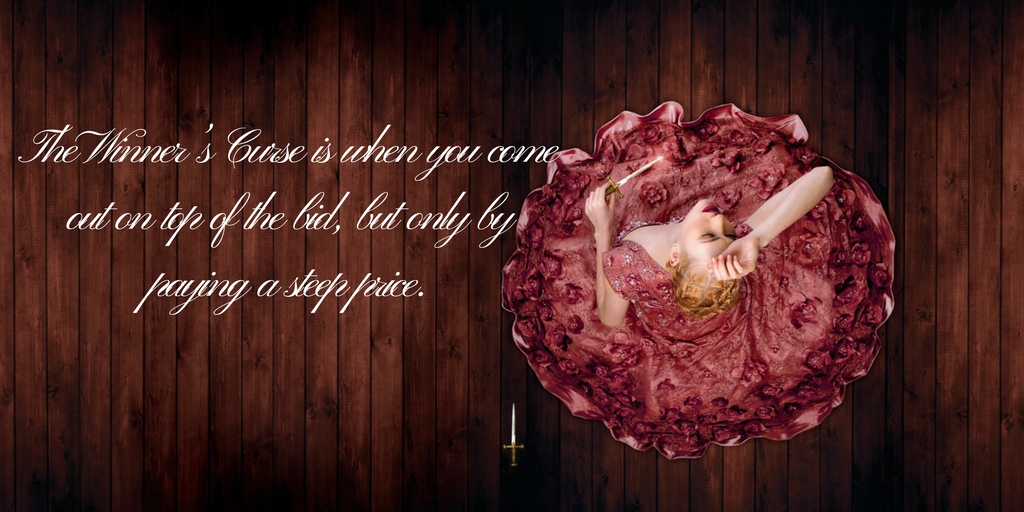 Kestrel, the General’s daughter, buys a slave “Smith” (aka Arin). She does not intend to but feels compeled to bid higher and higher to gain his ownership. She does not know what has possessed her as she is no slave master and has even freed her nanny a long time ago.
Now the owner of Arin, a blacksmith, he will be put to use in her father’s forge.

Ketrel’s father dreams of his daughter joining the army but she does not want to kill others. Quiet with a sharp intellect, she is a strategist in games, human relationships or at war. She knows her inability to master weaponry. Brave, proud and strong, all she wants is to play the piano even if it’s frown upon. A Lady does not occupy herself with the arts as those are meant for the slaves to entertain their masters.
She has a gentle heart and sees the wrong the Valerian did to Arin’s people.

Arin is proud and defiant but hides his true nature, bidding his time. We feel early on he has a hidden agenda and soon the stakes will be revealed.
Arin is drawn to Kestrel, his daughter’s enemy. He admires her beauty, her spirit and her kind heart toward his people. He’ll struggle to remain unmoved by the girl but it’s a lost battle.

Coming from two different universes, one from and enslaved nation and the other from the conqueror, Arin and Kestrel will learn to know each other and surpass these prejudices.
Romeo and Juliet from a lost time, their uneasy friendship evolves into forbidden love. Slave and master, conqueror and conquered.

While the plot unfolds, they will both be torn between their loyalties. Each choice will bear consequences and could mean losing the other or losing their friends and family. They’ll try against all odds to save a love condemned by their respective societies.

This book is powerful and has the right pace: not too rushed but none too slow either. All characters are well depicted from friend to foe and it will please all the fans of Kristin Cashore and Rae Carson’s books.

Convinced? Buy it here -> http://amzn.to/2opCb8g
View all my reviews