In this breathless third installment to Victoria Aveyard’s bestselling Red Queen series, allegiances are tested on every side. And when the Lightning Girl’s spark is gone, who will light the way for the rebellion?

Mare Barrow is a prisoner, powerless without her lightning, tormented by her lethal mistakes. She lives at the mercy of a boy she once loved, a boy made of lies and betrayal. Now a king, Maven Calore continues weaving his dead mother’s web in an attempt to maintain control over his country—and his prisoner.

As Mare bears the weight of Silent Stone in the palace, her once-ragtag band of newbloods and Reds continue organizing, training, and expanding. They prepare for war, no longer able to linger in the shadows. And Cal, the exiled prince with his own claim on Mare’s heart, will stop at nothing to bring her back.

When blood turns on blood, and ability on ability, there may be no one left to put out the fire—leaving Norta as Mare knows it to burn all the way down. 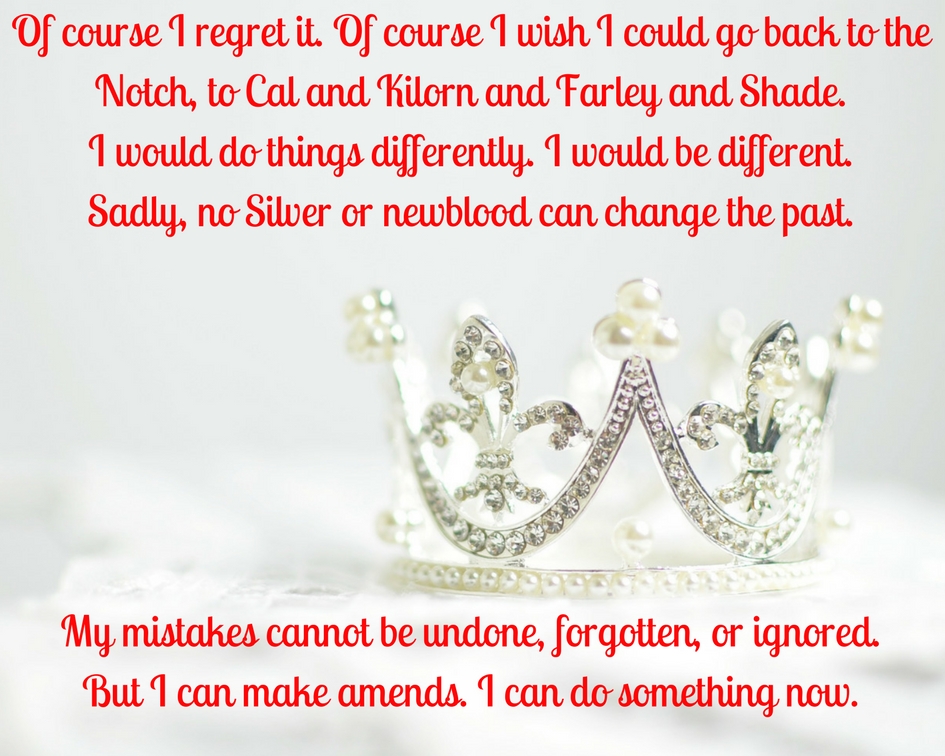 I’m relieved because I did not love Glass Sword as much as I loved Red Queen so I had so much hope but also so much fear concerning King’s Cage.

In Glass Sword I wrote

“I think this book is a transition book. The one where the heroine barely escapes becoming someone so cold and power greedy she would be hated by readers. It can be seen as her trial, a transition to become someone “more” in the third book. To become powerful and caring, a queen and a girl from the slums, to help Mare really make her mind about the brothers (another thing I hated in the book as she still regretted what could have been with Maven, if you can believe it!).”


Mare has been humbled in King’s Cage.

She’s not so mighty. She’ll be tortured, isolated and she will have lots of time to realize her mistakes. She knows she won’t become a monster if she lets herself listen and care for others.

This is a universal message: power is great but it’s frightening and it can corrupt. As long as you fear what your powers could make you do, you’re on the right track.

She’s growing up the hard way in this third installment and has become what she was destined to be: a strong but human heroine. I truly did love her: she is stubborn and so determined to save herself. To have a second chance. To become better. Really her determination was impressive.

“Another side effect of the Stone. It makes every beat of my heart feel heavier, and wrong somehow. It tries to empty me out. My forehead touches the paneled wall, letting the cold soothe. “Again,” I force out. I turn and stumble across the room. Again. Again. Again.”

1) Once more, it ends on a cliffhanger! When will I learn to wait for a whole series to be published before diving in? Never I fear… So be prepared vent by the end (you could always vent with me J).

2) I’m also so, so, so… disappointed with Cal. Where can I find this idiot to kick his behind and impart some sense his thick skull???

Really Mare, leave the guy in the dust and go your epic way. Woman to woman advice: he would have to seriously grovel like cook a five stars meal, collect the kids, give stellar massages and scrub the loo to maybe hope coming back on my good side.

Let me explain some of the story.

Mare has surrendered to Maven to save her friends. She may not be dead but she is trapped by a king obsessed with her, a manipulating king.

“Another might feel relieved, but my insides turn cold with fear. He will not kill me. Not Maven. I feel it in his touch. His long, pale fingers still cling to my wrist, while his other hand still holds my leash. Even now, when I am painfully his, he won’t let go. I would prefer death to this cage, to the twisted obsession of a mad boy king. I remember his notes, each one ending with the same strange lament. Until we meet again.”

After Shade’s death she’s utterly destroyed. I loved that part. Not that I enjoy when characters are suffering (and yet…) but because I could FEEL all her despair and follow her regrets. I saw her soul to the bones and could better understand her. She’ll have plenty of time to ponder on her past actions.

Maven… I nearly loved him. I know, I know he is a master manipulator. He’s done and he’ll do evil things. BUT… he’s been his mother’s victim too. The Queen from Hell destroyed his mind. What she forced the little boy, toddler even, to endure broke my heart. I could not remain unaffected by what he went through. And let’s face it: he maybe is obsessed with Mare, that’s certainly unhealthy but compared with Cal he puts her first. He is not “meek” in his feelings.

Twisted you say? Certainly but that’s how I felt. And I think that’s what Victoria Aveyard wanted us to see and think. I even believed it would be like Shatter Me by Tahere Mafi when I ended rooting for Warner.

But by the end of the book I thought she would be better with none of them. 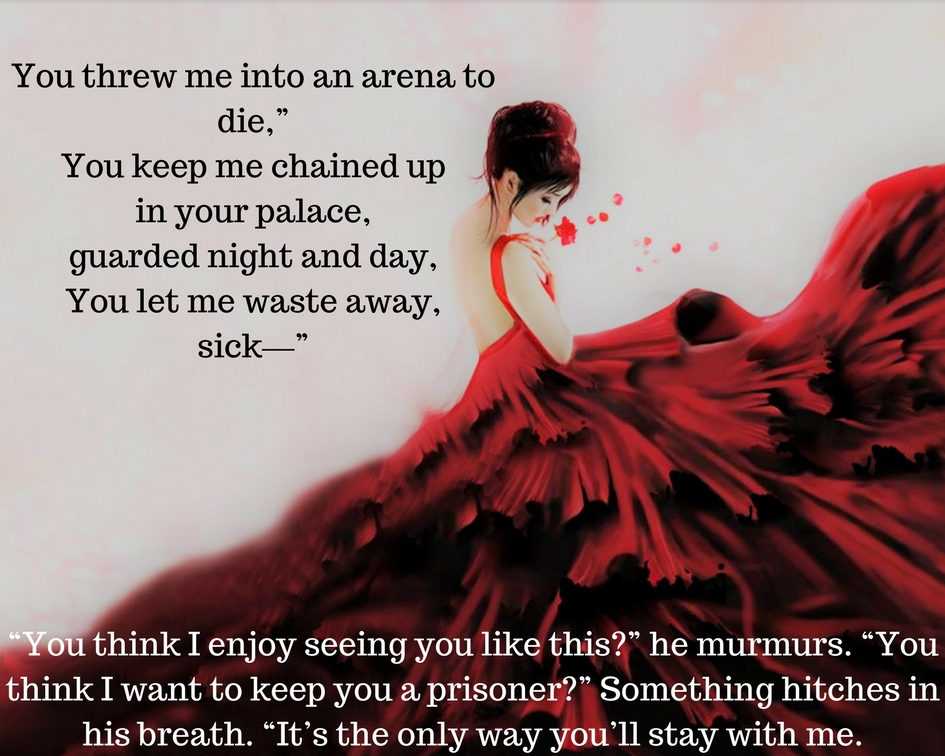 It was hard reading about her imprisonment, her torture, Maven’s scheming. Unrest will arise within Maven’s court and he may be a king he still has opponents.

“The court is a powder keg with an increasingly short fuse and a spitfire king. You’d have to be an idiot not to expect an explosion.”

The ending was unexpected and I’m at loss. I really don’t know what to expect from the fourth book neither what to wish for romance wise.

This third book is told only from female POV: Mare mainly, Cameron some and a little Evangeline. I’d like to hear Cal’s POV and especially Maven’s POV. They’re both flawed in their own ways.  If I was able to better understand Maven through his conversations with Mare whereas Cal remains a deep mystery and I would love having his intake.  Maybe I would be more indulgent with him? So far I find him meek and shallow, not the valiant knight in shining armor I want him to be.

“Cal follows orders, but he can’t make choices. You know that as well as I do.” (…)“No matter how wonderful you might think he is, so gallant, brave, and perfect. He would make a worse king than I ever could.” I almost agree. I’ve spent too many months watching Cal walk the line between Scarlet Guard and Silver prince, refusing to kill but refusing to stop us, never leaning to one side or the other. Even though he’s seen horror and injustice, he still won’t take a stand.”

Maybe the fourth book will be his fire trial and he will come tougher, more determined and passionate? Who knows?

What’s certain is that book made me feel many emotions; grief, sorrow, pain, fear, joy sometimes and disappointment in some characters. It’s never been boring the plot was solid as well as the character’s building.

Really well done Mrs Aveyard, you reconciled me with your series and I can’t wait to read the fourth book. Do you need beta readers? No? Editing job maybe? Still no? Damn! A girl can try…