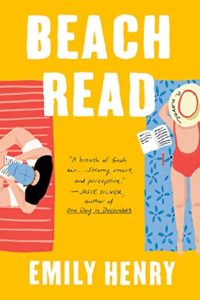 A romance writer who no longer believes in love and a literary writer stuck in a rut engage in a summer-long challenge that may just upend everything they believe about happily ever afters.Augustus Everett is an acclaimed author of literary fiction. January Andrews writes bestselling romance. When she pens a happily ever after, he kills off his entire cast.

I had seen that book everywhere on Instagram so when The Bookish Ladies Club announced that this would be their book club read for June, I was in!

I knew that this would not be “just” a romcom or a rainbow and unicorn story. And I wasn’t really surprised at the depth of the story and the struggles of the characters.

Someone in the book club said it was “sweet serious” and it’s the perfect definition that you could use!

You begin with January being homeless and in need of making money after she broke up with her boyfriend. She is a writer who needs to send her draft to her publisher like, yesterday but she has a writing block as she went through very difficult times.

Her father’s death and the discovery of his affair shook her world on its foundation and now she can’t seem to muster the will to write about her usual romcoms.

She arrives at her father’s “love nest” on a lake in Michigan and the first scene is quite funny as she is talking with her upbeat best friend on the phone and does not dare to check for a “sex dungeon” in the basement.

The same day, she’ll meet her grumpy neighbor or rather, noisy neighbor.

As January is quite bitter, stressed and tired, let’s just say that their relationship will begin with traded sarcasm. He’ll become her nemesis in that small town until ….until she realizes that he IS her old college nemesis/competitor/crush rolled into one: the famous Augustus!

Gus who writes very serious books as opposed to the light hearted books she writes.

I won’t say more about the plot, just that it’s a mix of hate to love story with lots and lots of hidden depth and serious topics.

Emily Henry has a smooth writing, plunging you right into her story and the character’s life! It felt effortless to read with a perfect pace.

It was a perfect balance between laughter and tears. Light and heavy.

Every character had hefty baggage but writing about characters with problems made them real and so relatable. They also had secrets. It was like these Russian dolls: you peeled one layer and another one awaited. You revealed a secret and another one was just waiting!

If you had hard topics like grief, abuse, rejection etc you also had tons of light and funny moments thanks to the way January and Gus communicated with their notes while writing!

I laughed when January ducked behind a shelf at a bookstore when she caught a glimpse of Gus! And I snickered at their witty banter!

And confession: it took me 59 page to realize she is named JANUARY and he AUGUSTUS! They are opposite in seasons and in book genre 🤣

Another thing I absolutely adored in this book was the dare they had running (I won’t tell more as you’ll have to discover it by yourself) and all the explanations January gave about writing a book! Plotting, writing characters etc. That was extremely interesting!

To sum it up: Beach Read was a delightful surprise, the discovery of a new author to add to my “one click” list and a story that hides lots of depth underneath a pretty package.