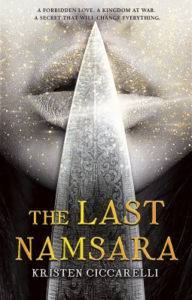 In the beginning, there was the Namsara: the child of sky and spirit, who carried love and laughter wherever he went. But where there is light, there must be darkness—and so there was also the Iskari. The child of blood and moonlight. The destroyer. The death-bringer.These are the legends that Asha, daughter of the king of Firgaard, has grown up learning in hushed whispers, drawn to the forbidden figures of the past. But it isn’t until she becomes the fiercest, most feared dragon slayer in the land that she takes on the role of the next Iskari—a lonely destiny that leaves her feeling more like a weapon than a girl.

Asha conquers each dragon and brings its head to the king, but no kill can free her from the shackles that await at home: her betrothal to the cruel commandant, a man who holds the truth about her nature in his palm. When she’s offered the chance to gain her freedom in exchange for the life of the most powerful dragon in Firgaard, she finds that there may be more truth to the ancient stories than she ever could have expected. With the help of a secret friend—a slave boy from her betrothed’s household—Asha must shed the layers of her Iskari bondage and open her heart to love, light, and a truth that has been kept from her.

This book has been for nearly two years on my shelves. I got it in a Fairyloot box but never took the time to read it. Now with YALC London looming at the horizon and Kristen Ciccarelli being a guest it was time to dive into that story.

My first thoughts, till minimum page ninety was “Damn, another one that I will DNF!”. My main problem was Asha. I did not like Asha at all.

She described herself as wicked and wrong.

She felt entitled, did not allow slaves to touch her (even if indeed it is forbidden in her country), hunted dragons and she also did not seem to learn from her mistakes (I am talking about some gift she got).

It’s hard to like a book if you can’t stand the MC!

She was the Iskari, the dragon slayer and she was nearly always hunting or fighting. Her intended Jarek was a monster. If she showed any hint of emotion toward someone he would seize the opportunity to blackmail her.

These were all “grim” tropes and feelings here that made me in a somber mood. I was gloomy n-and it did not bode well.

But progressively, step by step what Asha was coerced to do seemed to change her.

She will meet someone important and will be given tasks. Tasks she had no other choice than to accomplish. Begrudgingly may I say. Tasks that seemed like burdens at first but that served a bigger purpose and helped reveal the real Asha, peeling her layers one at a time.

And I thought that Kristen Cicarelly had played a smart game here, making us dislike her character just to realize that it was all a scam! Something even Asha was not conscious about!

From that moment on I was on board.

I won’t say I adore her now as first impression and all but she definitely grew in my esteem!

All the story is told from a single POV, Asha’s POV.

She really was the prominent main character and it’s a little sad that side characters were not exploited to their full potential. One exception: Torwin.

Torwin is neither a side, neither a main character. I’d say he is Asha’s conscience and will become more than that.

He’s been a slave since childhood, beaten and abused. But he’s also admired the Iskari all his life. He had a gentle soul but he was so brave. Torwin is one of these quiet characters, always on the outskirts but giving substance to a book. He was the one to guide Asha when she doubted. He was the one to show no revulsion at the sight of her scars. He was the one healing her and soothing her.

Even if their first encounter began on the wrong foot. Even when Asha showed disdain for the slave. Even ….Torwin will forgive and be a steady presence. He was Asha’s light and my favorite character of the bunch!

You already know this story has dragons but they were more than a being to be hunted by the Iskari! I was delighted to discover that the dragons had also stories to tell! They were not “just” these fantasy beasts that breathe fire but they loved listening and telling stories. The younger ones loved playing with others like kittens pouncing on their brethren. They loved, they protected and they hurt.

But this came at a price too because when one I liked was hurt I just wanted to cry like a baby!

Now as far as the plot and the story goes this book is all about dragons, old stories, plotting your future, poisoning your enemies, lying, a rebellion and a forbidden romance!

Action + quest + personal journey + romance = what could be wrong with that right?

Kudos for Kristen to write a story that turned out to be totally different than what it seemed at first sight.  Where fiends are foes and foes become friends.

Where dragons begin as enemies but end up as allies.

All along the world is turned upside down very slowly and astutely.

Will I read the sequel? Of course!