A September Goodreads Best Book of the Month*

A simple but forgotten truth: Where harbingers of death appear, the morgues will soon be full.

Angie Dovage can tell there’s more to Reece Fernandez than just the tall, brooding athlete who has her classmates swooning, but she can’t imagine his presence signals a tragedy that will devastate her small town. When something supernatural tries to attack her, Angie is thrown into a battle between good and evil she never saw coming. Right in the center of it is Reece—and he’s not human.

What’s more, she knows something most don’t. That the secrets her town holds could kill them all. But that’s only half as dangerous as falling in love with a harbinger of death.

Like a huge wave Black Bird of the Gallow engulfed me in its magic world and did not release me before the last sentence was over. It left me ashore a little stunned and with starry eyes.

Meg Kassel achieved the high feat of making me rediscover a genre that I’ve read often. No blazé reader here!

-The concept was original with Harbingers and Beekeepers.

-The pace was just right not too rushed not too slow.

-The characters were endeering and relatable.

-The romance was swoony.

But I gush and I haven’t explained the story yet!

Take a seventeen year old Angie living with her dad in a small old mining town. Angie has lived a life of neglect with her mom for years until some tragic event led her in her loving father’s arms again.
Angie has bagage. She is loaded with traumatic memories but thanks to music and probably therapy she is one of the most sane teenagers I know. She lives happily with her dad and has two great nerd/musicians best friends.

Now introduce a new family moving in the haunted house next door. Haunted as some horrific events happened in the house and no one wants to live in this house anymore.

Of course Angie is curious about her new neighbors. And of course she’ll look after her dad’s binocular to have a better view. Certainly not to check the new extra gorgeous boy next door…

No luck though as there is a lot of crows in the way. Crows multiplying for weeks. Crows with red eyes and bringing small trove to Angie. Weird you say?

Well add a mysterious man in a wool jacket and a changing blurry face and see if it gets weirder by the day.

Of course the new neighbor would be built and handsome and kind and…Angie is falling for Reece.

All would be well if Reece did not have a huge secret. And if Angie’s town was not on the brink of a huge change.

Ok I stop here for the plot. 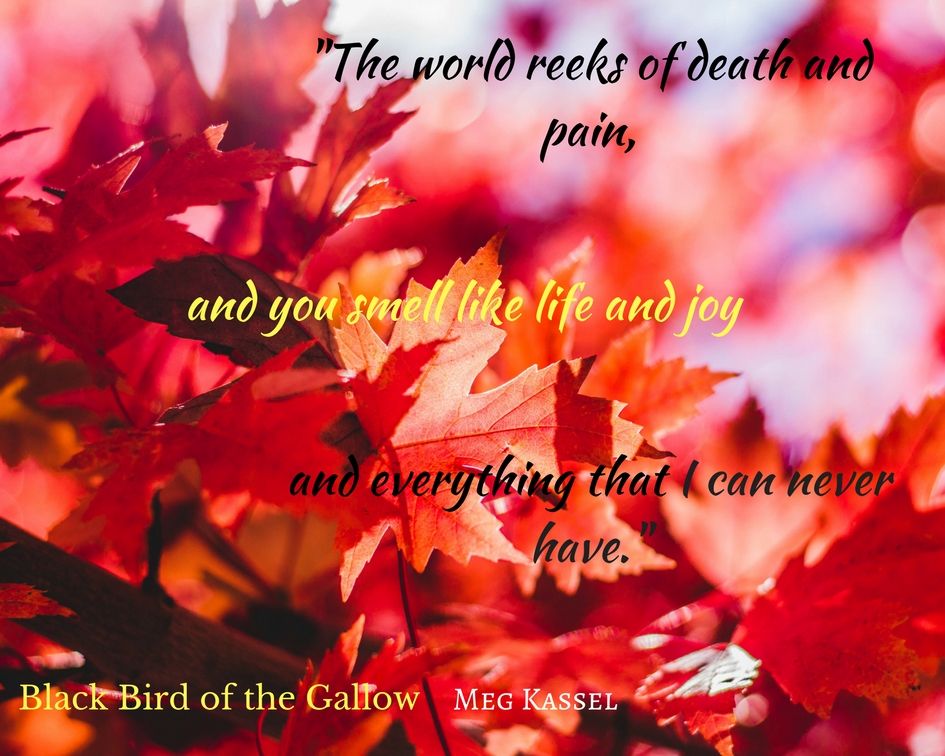 To make it short:

-Reece was the perfect YA hero. The one to make you wish go back to your first crush. See what he told Angie and tell me if it does not make you fall hard for him:

“The world reeks of death and pain, and you smell like life and joy and everything I can never have.”

-Angie was the right mix between strong and flawed, caring and curious, beautiful but not ostentatious.

-The side kicks as in her best friends, her dad and Reece’s family had just enough substance to help run the story smoothly.

-The fantasy creatures were a new and fresh concept.

-The romance was just swoony and had me all starry eyes. A little heart broken for them too.

-The ending was unpredictable and just..right.

Books like this one are real treats for Fantasy YA lovers like me. So read it as it’s one of my best 2017 books. It wil certainly not be my last Meg Kassel’s.

And buy the printed book as not only is the cover gorgeous but the insidd of the book is just as beautiful!!!