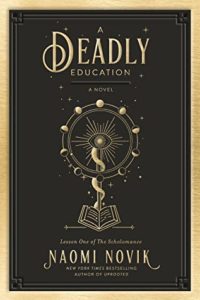 Lesson One of the Scholomance: Learning has never been this deadly.A Deadly Education is set at Scholomance, a school for the magically gifted where failure means certain death (for real) — until one girl, El, begins to unlock its many secrets.

There are no teachers, no holidays, and no friendships, save strategic ones. Survival is more important than any letter grade, for the school won’t allow its students to leave until they graduate… or die! The rules are deceptively simple: Don’t walk the halls alone. And beware of the monsters who lurk everywhere.

El is uniquely prepared for the school’s dangers. She may be without allies, but she possesses a dark power strong enough to level mountains and wipe out millions. It would be easy enough for El to defeat the monsters that prowl the school. The problem? Her powerful dark magic might also kill all the other students.

“Naturally I came out designed to be the exact opposite of this paragon, as anyone with basic understanding of the balancing principle might have expected, and when I want to straighten my room, I get instructions on how to kill it with fire.”

I have never read a book of Naomi Novik before.

Simply because her covers didn’t appeal to me, even if most of my friends sang her praise.

But when I got A Deadly Education in a book box, I decided to read it or rather, listen to the audiobook as, from the sample, I loved the narrator.
The writing is so detailed and descriptive that I know if I had read the book I would have skimmed while the narrator made it instructive and interesting.
But if you love an amazing world building and a unique magic system, you’ll be in heaven!

The title could not be better chosen as the school is literally feeding on its students! You either survive and make it to graduation or either die!
The author insisted countless time how the students had to trade to stay alive if they weren’t part of an enclave. They had to barter and scheme. It was literally bashed into the reader’s thick skull. Exactly like life taught Galadriel some hard lessons that, without an enclave having her back, her chances to make it out alive were very small and she’d better be smart and cunning!

Galadriel is the daughter of a single mom witch. Her mother is the kind to dance to the moon, flower power and all. Everyone loves and respect her mother. She is a radiant soul.

But Galadriel or El is doomed by her grandmother’s vision who predicted she would basically be the end of the world. So, when the little girl who never knew her dad wanted to be welcomed by his family was brutally shoved back and saved by her mom, she became angry.

“My great grandmother was just the first in a long line of people who meet me, smile, and then stop smiling, before I’ve even said a word.”

She will be repeatedly shunned by normal kids.

And in Scholomance, even among her own kind, as she went incognito, never saying who her mother was, she’ll be ostracized her whole education.
With no friends, no allies she really had it hard! Until the year before becoming a senior when the school’s hero, Orion Lake, saved her life repeatedly.

But having Orion saving your life and tagging along all the time made her the target of the New York enclave. Orion is their leader’s son and they don’t want her to splurge on his mana.

What’s mana you say? I didn’t explain yet the world building and magic system!
You have maleficers mostly taking their power from malia, dark magic you get while killing living things, very powerful but slowly rotting you from the inside out.

Opposite to malia, you have the mana. It’s like white magic that you build to cast spells. You can gather it while killing mal (when you are Orion) or when you do pushups and crochet when you are Galadriel. Kind of exhausting right? But nothing worthy come cheap.

Even if Galadriel is enormously powerful, she knows she is deadly to others and she has to actually rein in her power, using only mana and building her mana all alone.

She may have been designed to be akin the antichrist, she chooses not to be evil but to do good!

And what was heartbreaking for a long time, was that people didn’t want to give her a chance. They judged on her appearance and decided that she was a loser not worth their time and probably, a maleficer at that!

I loved how unlovable she seemed as she was like a hedgehog. Always angry, not kind to people but it was rather that she was unkind to unkind people. To posers. Arrogant kids.
Yet Galladriel didn’t hesitate to anonymously save the freshmen, sacrificing lots of her precious mana stored in her mom’s crystals because deep down she is a good person. Her mom raised her to make the right choices even if everyone expects the worst from her.

That story was very interesting by its topics (don’t judge a person based on the appearance), by the intricate magic system and world building, by its characters quite like onions where you had to peel the different layers and …by its ending! One of my best reads this year!

I need the sequel now!

Have you read it? Or any other book by Naomi Novik?