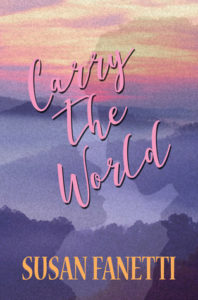 Eastern Kentucky, 1937.After the death of her husband, Ada Donovan returned home to live again with her aging parents. She does all she can to help them keep the small family farm going. But times are hard, and there’s never enough.

During one of her infrequent visits to town, she sees a help-wanted notice for the Pack Horse Librarian Project, seeking librarians to ride up high in the mountains and bring books to the people there. Before her marriage, Ada was a teacher, and the thought of returning to the work she loved is impossible to resist. The mountains are her favorite place, books are her great joy, and her horse is her best friend.

But not everyone on the mountain is happy to see her.

Living in a crumbing cabin at the highest, most isolated point of Ada’s route, there’s a family that catches her attention. The father keeps to the shadows. There is no mother to dote on the happy, curious children. But soon Ada comes to love them just as fiercely as the woman they lost.

And makes it her mission to bring them the world.

“We are bringing more than books to these people, Mrs. Donovan. We are carrying the world to them.”

I chose to read Carry the World after that I reviewed The Giver of Stars by Jojo Moyes and my friend Amy told me that Susan Fanetti had written something on the same topic earlier this year.
Not two days after, I discovered the controversy around Jojo’s book and I wanted to make up my own mind about the plagiarism accusation.
I decided to read all three books published in 2019 about the Pack Horse librarians of Kentucky.

I can begin this review telling that there is absolutely no plagiarism between Jojo Moyes and Susan Fanetti’s stories!

Both were a delight to read and very different from one another.
Their only middle ground was the setting of the story in Kentucky, in the remote and isolated mountains as well as the existence of the Pack Horse Librarians Project.
Where Jojo’s story focuses on friendship Susan’s is centered around the slow burn love story.

Jojo has four main characters, the pack librarians, while Susan has two POV: Ada’s and Jonah’s.

I will stop the comparison here as I want to actually review Carry the World and this novel deserves all the spotlight!

Carry the World is a tranquil, strong, steady and moving story.

I really enjoyed Susan’s penmanship and the way she eased me into that world, that era.

This is a story set in remote places when people were struggling to make by and survive.

Ada has been widowed far too young and as debt piled up she had to move back with her aged parents.
Ada is a devoted daughter. She is one of these loyal characters, soft and warm yet with an enormous will and strength born out of a deep sense of duty, of right and wrong.

When her parent’s farm is barely helping them live, she decides to take on the job of pack horse librarian. As an ex teacher Ada is educated and literate. She finds a new purpose to carry books and knowledge to people living in too remote places to access books and sometimes even attend school. As her boss said Ada does not simply carry books, she carries the world to these people.

Ada is used to the mountains. With the help of her mare Henrietta, she will ride under blistering sun, pouring rain and freezing snow. The road is dangerous for an unaccompanied woman. Encounters with bears, panthers or hostile mountaineers are Ada’s reality.
But is determined to do her job properly.

I would just like to pause briefly here to state that in retrospect I was amazed at how hard these women worked! The weather conditions were often harsh, people not all the time welcoming. We are so used to our modern comfort and, for many of us, easy life that I wondered how I would have fared had I had to do her job!

Going from place A to B 10 miles away takes us maybe 15 to 20 minutes by car but in the mountains on horseback you could take a half day! It was a whole other pace, a whole other life and Susan did a formidable job to make that reality alive and tangible for the reader.

Back to the story now ….

On her way Ada will meet a man, single dad of two young children, living in the remotest part of her path.

Jonah was guarded and remained in the shadows.  He did not want this woman to invade his holler. But his kids are too curious and soon enough tiny Bluebird Hope will open the cabin’s door to Ada.

This is what you could call a slow burn romance but it’s more than that.

I really loved the slow and steady pace of the story. Because what Ada did here was opening Jonah and his kids to the world. Jonah who is still mourning his wife Grace, seven years after her death.
Strong, illiterate but smart Jonah. Jonah who was left alone in the mountains with one kid and a newborn of a few days. That part after her death, when he was lost, when he had dark thoughts was truly poignant.

“It was the first time ever he’d felt real isolation. Not even when his parents and sister died had he felt trapped on the mountain. In those weeks of illness, they’d had a doctoring man up three times, but everybody still died anyway. But sitting at the side of their bed, holding a squalling, hungry newborn, while Grace moaned and thrashed until she was quiet evermore, Jonah had hated the mountain with his whole heart.”

He is a recluse in these wild mountains. Living with no luxuries, no plumbing nothing no money. But he provided hid children with the essential: love, care, food and protection.
What I loved above all about Jonah was how a good father he was. How he expected nothing from no one and was bewildered when neighbors offered help.They showed that he was liked. Him. The isolated man.

I enjoyed this slow dance between these two worthy characters. I loved seeing the mountains through their eyes. I loved how Susan Fanetti reminds us that, at the end of the day, luxuries are not important. People’s heart and love is what counts. That’s what makes a home.

Don’t go in this story expecting constant action, twists and turns. This is not that kind of a story. Of course, you have plot development and threats. But this is a story meant to be savored. You have to sink into it, learn it, walk to its character’s pace. You have to peel off the outer layers to get to its golden core.