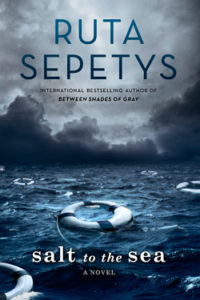 World War II is drawing to a close in East Prussia and thousands of refugees are on a desperate trek toward freedom, many with something to hide. Among them are Joana, Emilia, and Florian, whose paths converge en route to the ship that promises salvation, the Wilhelm Gustloff. Forced by circumstance to unite, the three find their strength, courage, and trust in each other tested with each step closer to safety.Just when it seems freedom is within their grasp, tragedy strikes. Not country, nor culture, nor status matter as all ten thousand people—adults and children alike—aboard must fight for the same thing: survival.

It was my first Ruta Sepetys but I already know that this is the beginning of a long reader/author love story.

I am speechless yet I have so much to say.

This is my third and shortest audiobook. I listened to the 8:30 hours in two days! My garden has never been so clean, my dog has never walked so much…I tried to find all the chores that I could do just to get back into Florian, Joanna, Emilia and to a lesser extent Alfred’s world.

I simply could not stop listening to that story.
It was also my first story with multiple narrators and I am VERY picky as far as voices are concerned. They really have to match the characters.
Well these narrators were all excellent!
Florian was read by Matt Damron and was the first reason why my attention was drawn to this story. He had read Beneath a Scarlet Sky and mesmerized me. I looked for his other audiobooks.

Often the multiple POV are only different because the name of the character is mentioned at the beginning of the chapter. But not here!
All four voices and characters are very distinctives! Each speaking differently. Even without hearing different voices I would have recognized each character. Ruta uses other words, she builds other type of sentences. Each character simply comes with another writing style and tone.

I loved this story happening at a terrible time: the evacuation of East Prussia while Germany was losing the war and Russian soldiers killed, raped and pillaged while progressing to Germany.

We follow four individuals and four other side characters. Their path will cross while heading to the harbor hoping to embark on a ship to evacuate.

I was immediately taken into these characters stories and took a liking to each of them save Alfred but I think he wasn’t really meant to be liked. Alfred was …complicated and the most controversial of these heroes.

Let’s take a moment to get acquainted:

Joanna was a nurse.

She came from Lithuania and worked with a renowned surgeon. She dreamed of becoming a doctor. When the story begins, we follow her as she is helping the refugee she was evacuating with. She found a little boy alone. His grandma died. They will bring him into their group and protect the wandering boy. Joanna always wanted to help as she “has medical training”. She also carries an enormous guilt and we’ll only discover her reason by the end of the story. Joanna is smart, kind, resourceful and pretty.

“Guilt is a hunter I am his hostage.”

Florian is Prussian. When we first meet him he is running wounded in the frozen woods. He is hiding something that “war have been fought over”. We don’t know immediately who he is running from and why. He says he has a mission but what mission and for who? He is very guarded and closed off. Nearly immediately he will kill a Russian who was about to rape and probably kill a young girl in a burrow in the woods. Florian is gifted, smart and handsome. He wants to stay away from others, to remain unnoticed yet he can’t let women or kids getting hurt. Beneath his outer aloof and cold demeanor hides a savior. A noble soul.

Emilia is Polish and fifteen. The Germans wanted to make Polish their slaves. When we meet her she is hiding in a food burrow in the forest. Nearly raped by a Russian soldier who entered her burrow she is saved by Florian. Emilia was …I can’t describe what I felt for Emilia. How an orphaned fifteen years old girl could survive hiding in the woods was beyond my understanding. Traveling alone, she  carried potatoes in her jacket.

“A potato for silence.”

Emila was the one I so wanted to protect from the war’s atrocities. She was sweet and had no one to take care of her, to protect her. Blond, with blue eyes and a pink knit cap she was the picture of sweetness and innocence. The one you think should never have to live the war’s ugliness. Emilia was also very observant. As her mother told her:

“If you observe carefully dear, you will never have to ask”.

When Florian saves her, he becomes her “knight”. It will be his nickname. She knew he would protect her, even if he wanted to abandon her. But he never could.

“Shame is a hunter my shame is all around me now.”

Alfred is the most controversial character. He is hard to like. Even if we understand that he’s been mocked and bullied by other kids, he was too weird and exhilarated to really appreciate as a character. He is a German sailor of seventeen, readying the ship to evacuate refugees. He writes letters full of flourishes and grand ideas to his “sweetheart” Anna-Lora. We realize pretty soon that he embellishes his life. He hides the truth or rather hides from the truth that his life is. Pretending to be a war hero in the making.

The side characters were just as quaint and well fleshed out. Ingrid the blind girl, the wandering boy, Eva the giantess. My favorite was the shoe poet with his shoe wisdom.

“The shoes tell the story”. Ruta Sepetys made him observe someone’s shoes and guess the story of that person. It was so well done and so true! I loved it!

We will follow their journey walking through the woods, evading Russian soldiers and bombing. Losing some of them on the way to the harbor.
Every one of them has secrets. Some really astonishing. All heartbreaking, Alfred’s included.

I was riveted by their stories. I wanted to guide and protect them. I wanted them all to be saved. But this is war and nothing is certain anymore.

I don’t have enough talent to express what Ruta Sepety made me live for two days. I can’t convey with enough strength and conviction all the beauty, the intensity, the sadness, the cruelty, the desperation of this formidable story.

I still have shivers and tears hearing in my head Jeorjeana Marie playing Joanna and whisper shouting: “Opi!” “Opi!”
I finished this book late at night and did not found sleep for a very long time, too entangled in their destinies and broken by their fate.

Just read or listen to it.

Have you read this story? Or have you ever been so immersed in a book that you could not stop thinking about it even days after?