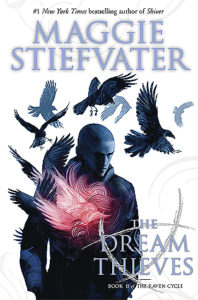 Now that the ley lines around Cabeswater have been woken, nothing for Ronan, Gansey, Blue, and Adam will be the same. Ronan, for one, is falling more and more deeply into his dreams, and his dreams are intruding more and more into waking life. Meanwhile, some very sinister people are looking for some of the same pieces of the Cabeswater puzzle that Gansey is after…

Mini review for this one as I will write a more in-depth review once I’ll be finished with the series.

This is the book when everything and everyone goes awry! Everything is unraveling.

Gansey is losing all his friends: Adam to Adam, Ronan to his nightmares and Noah is petering out. The ley line flickers on and of all the time and Cabswater is nowhere to be found.

Honestly, they had all a hard time and had me very worried!

Adam is so angry! He looks like his father more than once prone to violent outbursts. He will have to find a balance: “I didn’t agree to give my thoughts away. He would be Cabeswater’s hand sand Cabeswater’s eyes, but he wouldn’t be Cabeswater.

He would be Adam Parrish.” “The Magician”.

Ronan acts recklessly, taunted by crazy Kavinski. Car races ending badly, nightmarish creatures determined to kill Ronan …you’ll have it all! On the other hand, I loved that we learned much more about his secrets and his dad’s death. Maggie has an incredible imagination!

So far, my favorite was Ronan but I swear my crush is veering toward Gansey now.

Poor Gansey. He feels so …powerless!

He likes to be in control and he wants to help his friends so much.

But between being rejected by Adam at every turn, even fight with him and Ronan acting like a loose canon he is in over his head.

The anchor to all these boys is Blue, her mom and aunts.

They will guide and listen to the lost boys. I swear this bunch of odd crazy women is like a modern and sassiest Yoda for all these young boys. I love their brand of strange! They are all cool as cucumber even when a hit man lands in their mist!

The Grey Man began as a character I disliked enormously (he is a killer) but got to strangely appreciate thanks to Blue’s mom.

If there is tension and drama, humor is ever present in the banter!

“It makes sense that there is a family history to your condition,” he said. ”Do you eat all the men in the family? Where do they go? Does this house have a basement?”

Blue stood up. “It’s like boot camp. They can’t hack it. Poor things.”

The quest took a back seat for character’s development in this second book.

To sum it up: I feared the worst before Maggie made my world right again! They all had to learn something the hard way to go on with their quest.

PS I feel like Gansey is Glendower. I don’t know why but ….we’ll see by the end of this series!

Have you read it? What did you think of it? Am I right in my assumption?