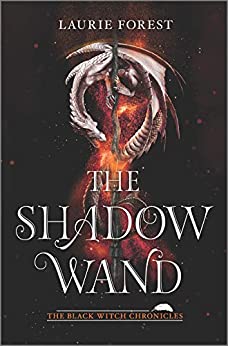 HER WORLD-ALTERING SECRET CAN’T BE HIDDEN MUCH LONGERElloren Gardner hides the most powerful secret in all Erthia—she is the Black Witch of Prophecy, and destined to triumph…or be used as the ultimate weapon of destruction.

Separated from everyone she loves, isolated and hunted, Elloren must turn to the last person she can trust—her fastmate, Commander Lukas Grey. With the Mage forces of Gardneria poised to conquer all of Erthia, Elloren has no choice but to ally with Lukas and combine their power to keep herself out of the hands of Gardnerian leader Marcus Vogel…the holder of the all-consuming Shadow Wand.

With just weeks to train to become a warrior, and no control over her magic, Elloren finds unexpected allies among those under orders to kill her. It’s time to step up. To fight back. And to forge onward through the most devastating loss yet.

That series is hugely underrated! And now that I binge read the three books, I wonder how I will survive until the next instalment!

The beginning of The Shadow Wand was interesting yet frustrating. We’ll switch between Yvan, Vyvian , Thierren, Sparrow (an Urisk woman)’s, Tierney and Elloren’s POV.

That was a lot of POV. If they were very interesting, it made the story feel disjointed, slow and I struggled in the beginning.

Later on, we’ll focus on Elloren but as she was far from her friends, all scattered in different parts of Erthia, the banter and camaraderie that was so enjoyable in The Iron Flower was missing.

Elloren is rather underwhelming in the beginning of the story. Hunted by assassins determined to kill the Black Witch she’ll be forced to ask for Lukas Grey’s protection.

I won’t give details here but just know that Lukas was a much more worthy hero in this instalment! I even came to love him nearly as much as Yvan and…I don’t know what to wish for Elloren.

Elloren will have to learn to fight and to master her power that is frightening her so hard. But there will be countless setbacks and that was equally frustrating for the reader (I wanted to see her rise and fight back with her power) as it was interesting because she had to take new paths.

People will die, be banished or be captured in this sequel. The odds look to be very, very dark and there is a hopelessness in that story that makes it heavier than the first two books.

I hope we are at the part where “everything has to get worse before getting better” because I sure need Elloren and her friends to have some winnings in the next book!

My complaint is that we are riding the love triangle trope which is one of my least favorites!

But as I said, that series is simply amazing!

Please mrs Forest write the next two books in a row so that we don’t have years to wait for the conclusion of the story!