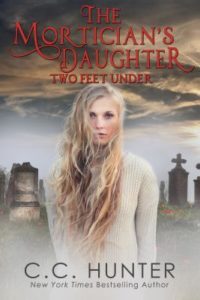 Riley has accepted that her special gift is to help dead people with their unfinished business. But she never thought she’d be tasked with helping the spirit of a convicted criminal who died in prison. He may lead her on the scariest mission yet, but helping him could mean saving the life of a child. The convict’s daughter needs a liver transplant and the one person who could still be a match is his brother…who also happens to be a gang leader.Hayden’s not happy that Riley’s discovered who he is and is seeing him sick and unconscious in his hospital bed. This feels like as good a time as ever to cross over and put all of them out of their misery….but Riley is in danger. She’s visiting some of the most dangerous spots and confronting some of the creepiest low-lifes in town. For her, he’ll need to regain his strength and fight to keep her safe.

But dealing with other people’s problems still can’t keep Riley from her own. Her dad’s drinking has gotten worse. And she’ll soon learn it’s because he’s been keeping a huge, horrible secret that will change everything she believes about her family and her mother’s death.

Reading CC Hunter’s books is like wearing my favorite plush sweater or curling on the couch under a blankie with a roaring fire in the chimney: comforting, easy and luscious.

Seriously I know that each time I will have a very enjoyable reading moment with just the right balance between suspense, romance, mystery, adventure, drama and humor.

She has a way with words that make me read these stories unaware of the time flying by when I am engrossed in the adventures of her fictional characters.

God knows that I awaited expectantly Two Feet Under!

If you have read my review of “One Foot in the Grave” (you can find it HERE) you maybe recall that I wrote a “complaint to CC Hunter” because we parted on a huge cliffy! I swear she could have been script writer for Dallas series and the likes *yes I am that old* where we parted not knowing who shot JR! She is evil like that I tell you!

By the end of book one we learned who Hayden was and that he was not really dead …yet! And then…. nothing!!!!

Will he wake from his coma? Would Riley and Hayden have a future together?

Was Riley’s dad really drinking? Would he stop?

And who was Riley’s mom? What was the secret surrounding her departed mother?

Who was “lunch lady”?

Two Feet Under begins right where we left Riley and will end with …more secrets and another plot twist!

My reaction finishing the book was “CC I hate you yet writing this you keep the ball rolling so ….more pleasure to come!”.

After reading my friend’s reviews of what is known as “cozy mystery” genre I think we could consider The Mortician Daughter’s series as CC’s own version of “cozy mystery” for teens in a paranormal world.

Every book so far focuses on Riley going on a mission to help a ghost. She “has” to help either unmask a killer (first book) either find a lost uncle to save a dying little girl. You even have the ever present animal, Pumpkin her cat, that you can find in many cozy mysteries.

Riley’s “partner in crime” is Hayden as he may be a ghost he can make phones explode, surprising anyone threatening Riley and giving her the needed time to escape if need be!

What I love once more is that Riley struggles with common teenager’s problems: swooning for cute boys, fighting bullies at school, dealing with parent’s problems but being far from “common” as she can see and speak to ghosts.

This mix of paranormal and perfectly ordinary elements make us really believe in the story and forget that this could not really happen “in real life”.

Riley feels like the “girl next door” you would love having as a friend. She is selfless, generous, courageous and smart. Hayden is …just dreamy! Supportive, protective, funny and handsome. You just want them to be together but ….let’s just say everything is not so simple!

Filled with expected tropes and twists that can be found in many YA books  CC Hunter is an expert at weaving her tales to let you have a fantastic reading time.

PS CC please write fast! I need to know what happens next 😊

Have you read it or any of CC’s books?