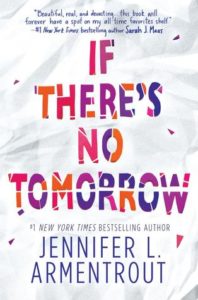 A single choice can change everything.Lena Wise is always looking forward to tomorrow, especially at the start of her senior year. She’s ready to pack in as much friend time as possible, to finish college applications, and to maybe let her childhood best friend Sebastian know how she really feels about him. For Lena, the upcoming year is going to be epic—one of opportunities and chances.

Until one choice, one moment, destroys everything.

Now Lena isn’t looking forward to tomorrow. Not when friend time may never be the same. Not when college applications feel all but impossible. Not when Sebastian might never forgive her for what happened.

For what she let happen.

OK this will be difficult to review as the blurb is vague and I don’t want to spoil the plot.

What I will do is briefly speak of the “yesterday” and then have a kind of bullet point review.

Yesterday features our main character, seventeen years old Lena and her three best friends Megan the “hyped kitten”, all bouncy, filled with energy and smart, Abbi quieter and the voice of the reason and Dary on a holiday with her family at that time.

The girls have always been tight since years and years.

Lena is the nerd. The one true bookworm. Her dad left them years ago and she has a job at a dinner to enjoy some luxuries.

On the volleyball team her coach urges her to focus on her game as scouts will come this new year. Lena would really be happy with a scholarship.

Yesterday also has a bunch of boys, all close friends and playing football. One of them Sebastian, is the guy effortlessly handsome and kind. He is Lena’s neighbor, best friend forever and secret crush for a long time. Sebastian and his friends, Keith, Philipp, Cody and Chris are all on the football team and in the leading pack at school. They goof around but as far as jock are concerned Jennifer Armentrout did not portray them as the usual pricks but rather the great guys.

It’s the last days of the summer holiday before their last year of high school. They are all so ready to have the year of their life before serious things begin with college and other stuffs.

That was yesterday and we follow this band of friends, witnessing their interaction, dynamic and banter.

Then Lena makes one mistake and today happens.

Here comes the bullet part of this review.

*I wanted to shake some sense in Sebastian in the yesterday. He was a great guy but reacted so clumsily! I just wanted for him to take his head out of his behind;

*In the today and tomorrow I just wanted to high five Sebastian. He was the best guy a girl could dream of and so supportive and protective!

*I needed some more tissues. Because my eyes were leaking a good part of the story. I think Jennifer did a great job handling the aftermath of the mistake and all the feelings and turmoil this provoked;

*I wanted to tell Lena to just “get over it” yet at the same time “hug her really tight” because God knows she needed it! She was at an impasse for a long time and it frustrated me so much! I wanted to rush the story and get to the next level! Still I knew it was not so easy and how Jennifer wrote about it was much more realistic. That these things took time. An indefinite amount of time.

*I was angry at Abbi. Yes I know Lena had changed but she was hurting too. What was Abbi’s business to make her feel guilty? Is it truly what friends do in such circumstances. And I know I forgot that Abbi hurt too.

So why not five stars? Because at some point the story felt like dragging. It was the same feelings/thoughts going on a loop with tiny variations. Again it was more realistic that way but it made for a less interesting, more repetitive plot line.

Recommend it? Yes! Even If this is not my favorite by Jennifer L Armentrout it still remains a very good YA story.

Have you read this one? What did you think of it?