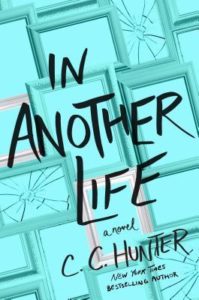 Chloe was three years old when she became Chloe Holden, but her adoption didn’t scar her, and she’s had a great life. Now, fourteen years later, her loving parents’ marriage has fallen apart and her mom has moved them to Joyful, Texas. Starting twelfth grade as the new kid at school, everything Chloe loved about her life is gone. And feelings of déjà vu from her early childhood start haunting her.When Chloe meets Cash Colton she feels drawn to him, as though they’re kindred spirits. Until Cash tells her the real reason he sought her out: Chloe looks exactly like the daughter his foster parents lost years ago, and he’s determined to figure out the truth.

As Chloe and Cash delve deeper into her adoption, the more things don’t add up, and the more strange things start happening. Why is Chloe’s adoption a secret that people would kill for?

I read this book literally in one sitting. I got it on Wednesday night and by Thursday afternoon it was all read. I swear each time CC Hunter publishes a book she has me all wrapped around her pinky!

This is no secret that CC Hunter is one of my favorite YA authors.

She has the knack to write stories flowing effortlessly, a perfect blend between mystery, character development, fun and insightful. She uses every trick and trope you can find in YA stories and does it with intelligence.

In Another Life wears her custom signature but the tone was heavier.

Chloe, our main character, is going through a painful time in her life as her parents just got divorced. She had to move from town, leaving all her friends and boyfriend behind.

The divorce is painful and her mother is angry, bitter and resentful.

To make things worse her mother is just recovering from breast cancer.

Chloe has become her mother’s caretaker. The adult in the relationship.

It leads to festering angry feelings. Towards her father who left them to fend for themselves. Who broke her picture perfect father. Towards her mom who’s acting all childish but this feeling comes with guilt as she’s been so sick. Yet children should not arbitrate fights between their parents suddenly behaving like broody teenagers.

“Her faded blue bandanna has slipped off her head. All I see is baldness. And—bam!—I’m mad at Dad again.”

This role reversal was perfectly executed. Nothing was overdone or brushed under the rug. I could really feel Chloe’s feelings and empathize with her. She was not a drama queen. She was the sensible one in that shattered family and she had a right to feel that anger because yes, parents betrayed her!

Chloe’s breathe of fresh air was Cash the Über cute new guy at school. Even if their relationship began with lots of bumps and animosity in the beginning for reasons I won’t explain in the review as I don’t want to spoil your fun.

“I force myself to look up, seeing first his wide chest, then his eyes and the jet-black hair scattered across his brow. Great! Why couldn’t he be some old fart? I return to his bright green eyes and watch as they shift from apologetic to shocked, then to angry. I should say something—like, add my own apology—but the lump in my throat returns with a vengeance.”

She does not want to believe it yet there is this small voice nagging at her mind…. She has also torn loyalties and complicated feelings. What does she want? What should she want? Talk about emotional whiplash!

From that moment on the story becomes a thriller and a mystery.

Chloe and Cash will try to find the truth gathering clues about Chloe’s past and unknowingly awakening threats buried for years.

Cash was not only a pretty face but he also was a complex character. Shaped by a traumatic past he is a guarded boy if I ever saw one. Here again CC Hunter brushed a very realistic and intricate portrait of what would become later of a kid if he went through all that had hit Cash as a young boy.

I really appreciate the sensitivity of the writing. Many contemporary and “every-day life” topics are brushed in a realistic and intelligent way from the aftermath of a divorce going bad to growing up too fast to take care of a loved one; making peace with what you’ve done in the past, finding your true identity, making new friends after you’ve been uprooted and I could go on and on.

I think what I love above all else with CC’s stories is that she makes you believe that all could happen to you and be real. Even when she creates vampires and werewolves. Because she weaves realistic tales thanks to mundane worries her characters have to face every day.

This is exactly what she’s done in this story of secret and death.

My only complaint if you could call it a complaint is that her usual snark and laugh out loud moments was toned down in this novel. Yet it fits the dark mood of the story.

I received a copy of this book via Netgalley courtesy of St Martin’s Press but it had no influence whatsoever on my willing and honest review.

Have you read it or any other of CC’s stories?