Hi friends, today you will get an extra short review. More a “telegraphic review of my thoughts” as not all my buddy reads are finished with it (Jen???) but if I don’t write something my pea of a brain will forget everything! 😀 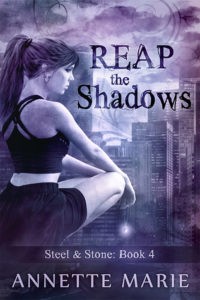 Piper is feeling a bit overwhelmed. With Seiya and Lyre missing, Ash recovering from near fatal injuries, and the Gaians picking fights with daemons all over the city, a girl can’t help but think she might be in over her head. And this time, she’s on her own.Before she even has a chance to investigate the Gaians’ new stockpile of mysterious, high-tech weaponry, an old enemy ambushes her: Samael’s henchman Raum. He wants Ash’s help and won’t take “get lost” for an answer. She doesn’t know if she can trust Raum, but even more than that, she can’t trust herself with Ash. Sooner or later he’ll catch up to her, and she fears she won’t be able to walk away from him a second time.

Despite her feelings, it will take their combined strength to face a frightening discovery about the Gaians. She and Ash begin to realize that the daemon war is coming to Earth, and they might be the only ones who can stop it — if it’s not already too late.

When you don’t think it could get worse or go faster, you are proven wrong!! I honestly don’t know where the author will lead us!

Some key words I jotted down while reading:

-Pipper’s dad is an @ss certainly here even if ….. If having bad parents was an olympic sport she’d get the gold medal hands down!

-Pipper is afraid of what she’s become and who she could become. She has difficulties mastering her shading and bloodlust. She always wanted to be a peacemaker and now she morphs into a killer! Can you imagine having no control on what you are doing? Like when you are super drunk and would do things you’d NEVER do sober and the day after you are confronted with your deed and you are so horrfied that you’d like the earth to poen up and swallow you? Well that’s what’s happening to Pipper only instead of dancing naked on tables while drunk out or her pretty behind she is killing people!

-I love Ash so much and I want that ship to sail, not sink. Random thought: I was happy to place that expression here as it took me a loooong time to get what readers meant by ” a ship that sunk” 😆

–I want to know more about Lyre and his story because he proves to be much more than a pretty face and a drooling bod! Even if I wouldn’t mind encountering said bod in a dark wood at night. I bet I’d leave him ravish me all his content!

-betrayals are everywhere and corruption rampant. Demons are making Earth their playing field and they fight for supremacy. Time to get all your prized possession and hightail in another peaceful place!

-terrible loss here! No spoiler but I’m just saying that I wanted to cry for Pipper. Where are my tissues???

–cliffy at the end. Some hope but also the biggest challenge ahead. You’ve been warned, read at your own risk and don’t complain.

Have you read that series? What did you think of it?