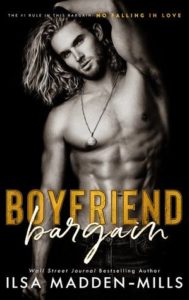 Wall Street Journal bestselling author Ilsa Madden-Mills returns with an all-new swoon-fest of a novel about what happens when you take a chance on love.Wanted: one hot guy with rock-hard abs and a big stick.

Broke and desperate, Sugar Ryan has no use for arrogant, bad boy athletes . . . until she’s forced to bargain with the cockiest of them all.

If only he knew she was alive.

Her mission? Get on this hockey player’s radar any way possible.

Zack Morgan is the king of the ice and the bedroom—but nothing prepares him for the mystery girl who shows up everywhere he does—frat parties, his favorite bar, and finally his front door with an offer he can’t refuse. The only rule in her boyfriend bargain: no falling in love.

But after one (um, two) smoking-hot hookups, he’s done with pretending and vows to make their fake relationship real. Too bad she can’t trust a player with a reputation for breaking hearts.

Will this hockey star score his forever girl or will their Boyfriend Bargain end in heartbreak?

I have read another book in the college hockey world some weeks ago: The Risk by Elle Kennedy. It seems that I have a thing for hockey right now! If the center plot for said bargain was similar you won’t mistake one for another.

The characters are completely different for once and the backstories could not be more unrelated.

Now that’s been said what is the Boyfriend Bargain about and why should you read it?

First it is about a hockey player Zack or Z, star of his college and already drafted by the NHL. Of course as an athlete he is muscled (yum!), very tall and looks like a killer vicking. Just look at the cover and I think you’ll get a fair idea of his mighty fine physique and sex appeal! 😀

Z is so much more than a hot bod! Deep down he is a very good guy who has lived a drama that left him vulnerable. He has flaws ladies and gents and that’s my favorite kind of hero!
Yet if the man has issues he also is a warrior and quitting is simply not in his blood. He is really determined to overcome his limitations and be the master of his life again!
I think that’s the quality that I admired most about Z: his tenacity.

Enters Sugar!
I so loved her name! She comes from the South and it could not have been better chosen.
Not because she is all sweet and soft. But because she craves sugary treats. That’s a girl following my heart! LOL

Sugar is tall, beautiful in that southern way but has been through enough in her life to have a steely backbone.

She has had a very difficult childhood and has been abandoned by her coward of a sperm donor! Her mom died when she was not even a teenager and she’s been uprooted to Minnesota to be raised by her mom’s best friend Mara owner of a strip club!

Sugar is a very independent and prideful woman. She knows what she wants and you can’t help to admire that strong heroine.

When Z and Sugar meet it will be explosive and off the charts hot! They detonate and will do many times in the book. They are like a powder barrel! But it won’t only be because of sexual chemistry! Both their wounds and past will make them alternate between scorching heat and times apart.
No one said love was easy and that’s so true with these two!

I really liked this story thanks to the  characters.

They were portrayed in such way that they felt real and both very likable. Z might be a hockey god he was not perfect and insufferable. Deep down below that iron will and vicking warrior body beats a tender hearts. And that’s what made the book so touching: the mistakes, the flaws, the struggles…the journey!

Have you read books by this author? Do you like sportsromance? Flawed heroes?