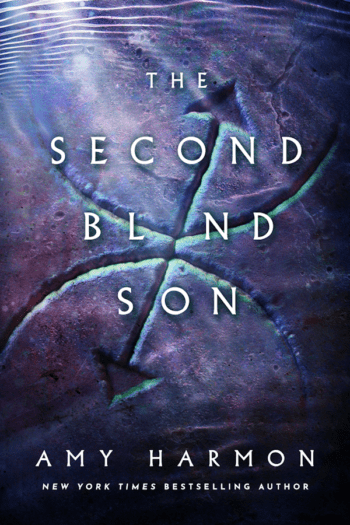 A lost girl and a blind boy discover their greatest strength is their bond with each other in a beguiling fantasy by the New York Times bestselling author of The First Girl Child.An insidious curse is weakening the Norse kingdom of Saylok, where no daughters have been born in years. Washing up on these plagued shores is Ghisla, an orphaned stowaway nursed back to health by a blind cave dweller. Named for a mysterious god, the boy, Hod, is surrounded by prophecy. To Ghisla, he’s a cherished new friend. To Hod, the girl is even more so. For when Ghisla sings, Hod can see.

Unable to offer safe shelter, Hod urges Ghisla onward to become a daughter of the temple, where all the kingdom’s girl children have been gathered. But because of a magical rune, the two cannot be separated, no matter the time or the distance.

Now, subject to a ruthless king, Ghisla enters a desperate world of warring clan chieftains and catastrophic power struggles. Who among them can be trusted is unknowable. So are the sacrifices Ghisla and Hod must make to defeat the cursed forces that could destroy a kingdom and the fated bond between two souls.

“You are not cold, Ghisla. Not to me. You are color. You are sound. You are the song on the wind and the hope in my heart.”

We are back in the world of Saylok! World we discovered with The First Girl Child!

The story begins with a tragedy befalling upon young Ghisla. She has lost all her family and is ready to die. Only Odin has other plans for her and she is awash on Saylok’s shores, soon to be discovered by Hod.

Flashback to Hod’s childhood when his mother, while he was an infant, pleaded the temple keepers to bless him. He was blind and no blessing could restore his sight. But Master Ivo gave him preternatural senses so that he’ll hear and smell better than anyone else.

When Hod discovers Ghisla she is fourteen but looks much younger while at sixteen he already is very tall.

They story will span over more than a decade and we’ll follow Ghisla then Hod and switch to Ghisla again when they were apart yet couldn’t help but think of the other.

For a while a magical rune will help them to talk even miles and miles away.

Their story was hard and uneasy.

Amy conveyed accurately a collapsing Seylok, where no more girl child are born, chieftains end up making wars to each other while they are raided by Northmen. She explained in her end notes that she wrote it in the first six months of the pandemic while the world was falling apart and I think it added a desperation and run against the clock feeling into this book.

“Fear brings out the ugliness. It is easy to be kind and good when it costs us nothing. It is not so easy when it can cost you your life.”

I knew the outcome for Seylok and it was like hurtling towards the dramatic pinnacle of the story.

I have read The Fisrt Girl child and knew a great deal of the world and parallel events. Yet I had no idea about Hod and Ghisla’s desperate love story.

Hod and Ghisla’s story felt somber than Bayr and Alba’s.

Early on they will be separated and Ghisla was a heroine who had lost hope.

Hod made her promise to “not give up” and she always replied with “I won’t give up today”. She was far from sunny Alba we knew as a child. She had an intensity, an urgency that made me want to soothe her, give her some assurances that “all will be well”, give her comfort and real protection.

Her gift as a Songr felt like a curse sometimes, especially as far as the king was concerned. I guess these are two sides of the same coin, make people happy and chain you to a difficult burden.

While Ghisla was sad and often felt alone, Hod was in stasis for a long time. He had been raised and prepared for one purpose yet when the time was right, he got denied and was adrift.

Both were loveable characters but I confess that for a long time Hod retained an aura of mystery. He was not a villain but his thoughts and his allegiance to Ghisla only made him a wild card for Seylok’s future and the Keeper’s fate. Again, if you compare with Bayr, he was less innocent and far more burdened all along.

Rich in mythology, clan war, power struggle and desperate love, the Second Blind Son will plunge you in the magical world of Saylok and will have you lose count of time entirely.