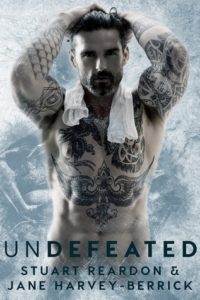 When your world crashes down…
When they all say you’re out…
When your body is broken…
I will rise.
I will return.
And I will be undefeated. Nick Renshaw is the golden boy of British rugby. When a serious injury threatens his career, he starts to spiral downwards, a broken man.

Feeling abandoned and betrayed by those closest to him, he fights to restart his life. Maybe there’s someone out there who can help him. Maybe he can find his way back toward the light. Maybe … not.

Dr. Anna Scott might be the one person who can help Nick, but she has her own secrets. And when Nick’s past comes back to haunt them both, the enigmatic doctor is more vulnerable than she seems.

Broken and betrayed, the struggle to survive seems intolerable. Who will give in, and who will rise, undefeated?

When your world crashes down…
When they all say you’re out…
When your body is broken…
I will rise.
I will return.
And I will be undefeated. 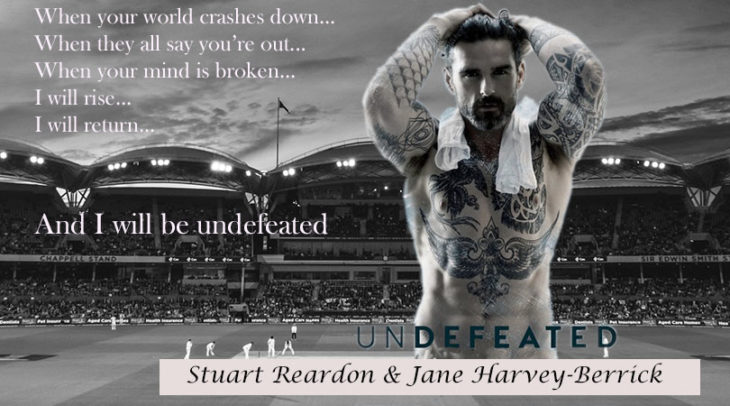 It’s been nothing like I expected. Rather let me reformulate: I expected something good as I know Jane Harvey-Berrick’s writing and am a fan. I did not expect that intensity!

Let’s go very quick over the plot as I really want to delve into what made this books so powerful.

Nick Renshaw is a professional rugby player of 26 years old at the beginning of the book. He just signed with a first league club. His future seems bright and he will propose his girlfriend Molly.

The first bump comes with an injury suffered in his last match at his former club. Nick will have surgery but will never feel he recovered totally and it will play with his head hindering his progress in his new club.

The club sends Nick to a psychologist specialized in athletes. Dr Anna Scott is really dedicated to her profession. She is American and moved to England to have a fresh start after a sordid affair. There is instant attraction between Anna and Nick but Nick is loyal and engaged whereas Anna has a strict no dating patient rule. They will form a friendship of sort but nothing more.

On a fatefull day Nick’s world will crumble and he’ll make a very bad and violent decision that will lead to serious consequences and have him lose everything he had worked so hard to achieve. Broken he will need someone to drag him out and have him rise again. Will Anna be able to help him and at what price for them both?

What makes this book so powerful?

Usually when you read a sportsromance you read a romance and you read ABOUT the sport.

For two days I ATE, BREATHED and LIVED rugby. I was running on the field among my mates. I was soaking in ice baths to have my muscle recover from their micro trauma. I was swallowing ibuprofens to help my battered body to recover.

For two days I was Nick.

I went through incredible highs and then incredible lows. I was battered physically and emotionally. I thought my life was finished. I was desperate then numb. “Because what am I, if I don’t have rugby?” Until that spark was re-ignited again thanks to Anna. Until I trained like mad and fought like a lion to get reborn like a phoenix and rise …undefeated.

What Stuart Reardon and jane Harvey Berrick achieved was a sportsromance story like none other. I never thought I would enjoy reading the technical aspects of rugby and yet I found them fascinating. We got a unique insight of what being a professional athlete is means. Not the glitter and glamour that we usually read about but the day to day humbling task of building your body and hone it to make it a war machine.

The work, the courage and the dedication these athletes push into their passion is admirable.

Nick Renshaw was a formidable hero. Beneath his hot bod with bulging muscles, raven-dark hair and tattoos lies a truly good man. He was “raised right” by his mom. He had an incredibly supportive family. Having left school at sixteen and working in a factory for two years he was not the typical cocky hero. He was handsome, supportive, passionate, hard-working, solid and humble.

Yes he made a huge mistake that will be the beginning of his descent in Hell. Stuart and Jane described perfectly what it does to someone to see his dreams shattered. The destructive path you can follow just to be numb. Just to stop suffering. Just to forget.

“He was slowly and methodically falling apart. Maybe for some people breakdowns came quickly, shatteringly fast. For Nick, it was a slow descent, like walking through swampy ground. Each footstep sucked you down, deeper and deeper, sucking the life out of you, one slow step at a time, until you couldn’t move. “

But no other hero has ever been more deserving of a second chance than Nick. Because he’s been destroyed and he clawed his way out of his dark pit.

We have two points of view in the story and Anna was a fantastic heroine. She was real. She was flawed. For all her expertise and dedication in her fieldwork she had her own secrets and made her own mistake making her relatable and loveable.

Nick won’t be the only one smashed to pieces in this story. Anna will be crushed. “Anna’s future scrolled in front of her: humiliation, public shame, disgrace, dishonour. Her integrity, gone. Her livelihood, gone. Everything she’d worked for, gone. “

This is a lesson of courage, determination and endurance. A romance story and a tale of redemption and determination.

Not only was I fascinated by Nick’s journey but the romance between Nick and Anna was excellent.

When Nick and Anna meet the attraction is undeniable and sparks fly by. “Even clothed, he exuded raw power, a sensuous magnetism that threatened to derail her thoughts.” When they’ll succumb…you will have incredibly HOT scenes. One in particular in the physio room left me in need of a cold shower!!!

You will be swept off your feet by their romance and the power of their attraction. But love does NOT solve everything. You need to work for what you want. You need to fight back. When you’ve been in the pit of despair and worked to conquer everything and everyone back your victory will be incomparable.

And what a glorious finish!

If you love intense sportsromance featuring a battered bruised but triumphant hero and a courageous relatable heroine just one click already. You will live it. You will dream it. You will fall head over heel in love with it. You can thank me with chocolate 😉

Now this book holds some really inspirational quotes and I can’t resist to share some more with you to show you why I think Nick is a formidable hero:

His moment. His day. His life. His eyes searched for Anna’s in the crowd, and his heart filled with a fierce joy. Today he’d made her proud and made his country proud. And most of all, he’d made himself proud. Today, he’d won. Today, he was undefeated.

Have you read this book? Or do you want to read it now maybe?