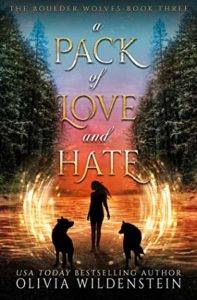 ONLY ONE CAN WIN.Volunteering to duel alongside Liam Kolane against the ruthless Creek Alpha could get Ness killed, but the alternative, leaving her hot-headed Alpha to die alone in the dueling ring isn’t an option. Not even when he places ridiculous conditions on her, like not spending time alone with August, her intended mate.

Ness didn’t want a mate, but that was before August stepped back into her life, before he picked up the scattered pieces of her heart. Between their shared history and the magical tether that binds them, Ness finds herself falling dangerously hard for the sexy shifter.

But Liam’s heart is on the line. A heart that still beats for Ness.

Only one man can win her love, the same way only one Alpha can rise from the duel.

Pfew! I am reconciled with this trilogy!

A Pack of  Vows and Tears, second book of this trilogy, had left me angry as Olivia introduced one of my hated tropes: love triangle!

More than that, Ness who had been so strong in the first book felt like a shadow of herself.

I hated Liam’s manipulation and as I had a crush on August I was really angry at how he was mistreated and played with!

I am happy to tell you that ALL these pet peeves disappeared in the conclusion to this trilogy!

Ness is back being the strong girl and bonus, she has mellowed and is more open to other shifter women, realizing that she’s been on the defensive (and rightly so) and closed off from other pack members of the feminine variety.

She will support Liam and help him in his quest to defeat Cassandra Morgan but she also will stop his manipulations and will stand her ground! YAY!

The plots is good with us trying to figure out Cassandra’s secret (I did figure it out!) and betrayals are still the running money.

I read it in one go, reading till 1 AM as it is an easy, fast and very enjoyable read!

I would say that this trilogy is one that can be read fast and will hold your attention through the end! If you love shifter stories and pack business, give it a try.

Have you read this series? Do you love shifter books?