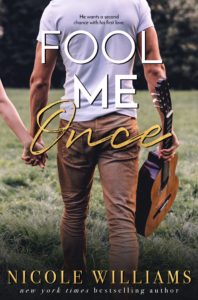 Second chances are for kids, diets, and shelter pets—not for relationships. Especially not one like Chase and Emma’s. Before he was writing chart-topping hits and smashing record sales, Chase Lawson was Emma’s childhood friend and first love. They promised each other forever, but forever expired at eighteen, when he landed a major record deal and left Emma and their hometown behind.Ten years later, he shows up at their high school reunion with a proposition she can’t refuse. Six months. Seven figures. He gets a chance to clean up his reputation, and she gets the means to restore the old family farmhouse. It’s only for show—hold hands in public, kiss for the cameras—but boundaries blur behind closed doors.

It isn’t long before Emma feels her resolve slipping, crushed by the shadow of the boy she grew to love in the man selling out stadiums of present. Can Emma resist one of the most irresistible bachelors in the world? Or will she fall for the same man twice?

This book is just perfect if you are looking for something easy to read that will leave you with a joyful feeling, some stars in your eyes and tears of contentment.

Nicole Williams has never disappointed me so far and this book enters the category or “romantic second chance story”.

My friend Angy does not like angst in her stories and I think if like her you  love your drama very low key you should give this book a chance.

We follow Emma, the typical country girl working on her parent’s farm and loving her small town. She has no big dreams but had her heart broken at eighteen when her boyfriend Chase left her to pursue his dreams of fame and glory.

And famous he became!

Chase is now big, very big in the country music scene but he has somehow lost his way and now needs to improve his image and clean his act.

What better solution than to ask your old country girlfriend to rekindle the flame right?

Well that’s the plan and Emma gives him six months of her life. By the end they’ll part ways and she’ll be richer of one million.

You will have many used tropes here and won’t have many surprises (except for the choice made at the end) BUT it works really well!

-Sass and banter as old girlfriend is not impressed by superstar status? Check.

-Drove of enamored female fans but star has only eyes for his girl? Check.

-Realization that fame is not the most important and that he did a big mistake? Check.

-Fool under the sheets because the chemistry is still off the charts? Check.

See you have them all but what makes it so enjoyable is Nicole’s experience as a writer used to play effortlessly with all these tropes and still make them look fresh and appealing!

It gives us a story without big surprises but so engaging that you’ll read it in one sitting like I did.

The characters are likeable and relatable. You will probably swoon just reading about Chase’s dedication to Emma and feel all hot and bothered when he sets his mind to make her live in the moment!

Are you a fan of Nicole Williams?