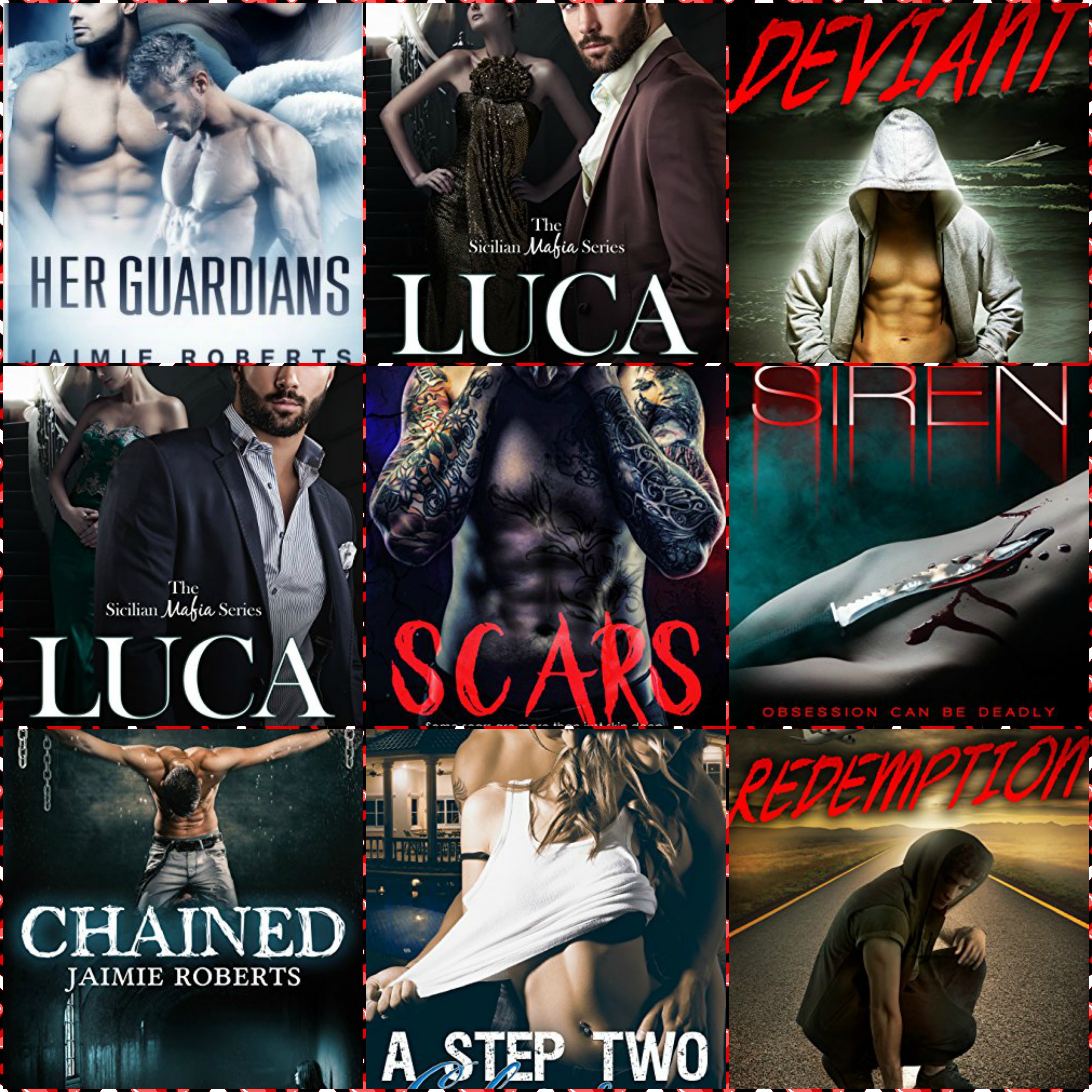 I’ve read nearly all of Jaimie’s books so far so when she agreed to play the interview game I was so thrilled!

Who wouldn’t be knowing you have a chance at a “heart to heart” with an author you love, right?


So for your eyes only, here goes Jaimie Roberts’s interview!

First, thank you so much for agreeing to my request. I know you’re always a busy bee with your books, family and life in general so I really do appreciate the time you’re taking to answer my questions.

♥ Some words about you to begin with maybe? Who was little Jaimie? And who is adult Jaimie? Some quirk maybe?


Lol, like Tyler in Deviant, I have quite a lot of OCD tendencies, but I’ll get to that in a bit. 😉


Little Jaimie is much like adult Jaimie – naughty, lol. My husband hasn’t nicknamed me 4-year-old just for the fun of it. Unfortunately, though, in little school I was bullied. I hated every minute of it. I couldn’t wait to leave. However, once I did leave my mum got me into an all girls’ school and the bullying stopped. It was there the little timid Jaimie came out of her shell – so much so that I became a right naughty little minx. Now, I’m a lot more settled. I have my moments of madness, but I tend to be rather shy and quiet. I’m especially like that around people I’ve met for the first time.

♥ When did you know you wanted to write books?

At the age of 17, I started writing poetry and even thought of a story to write. It involved a girl moving from the country to the big city where she goes to work for a CEO. It’s a romance, so I think you can guess where it was supposed to head. Anyway, due to work, life, kids, etc, I never had a chance. When the recession hit, it eventually started to affect my job. I found that I had gone from being too busy at times to sitting there twiddling my thumbs on most occasions. So, I decided that I needed to use that spare time I had and use it constructively. Take a Breath was born and I caught the writing bug. Unfortunately, I made a rookie mistake by publishing it before getting it edited. I’m not saying that my writing is perfect now – far from it, but I know I have grown a lot since that first book. I’m living my dream. I can’t think of anything I would rather do.

♥ Could you tell us something about your first and current writing adventure? Do you let your family read your books? Your husband (because damn girl but you’re writing some hot and twisted stuff sometimes)?


My first book, Take a Breath is about a young girl living with her mum and soon-to-be stepdad, who she has an obsession with. She works as an analyzer at a local police station and the H works there as the Captain. A serial killer is on the loose called “The Blonde Killer,” and the reason for this is because he is targeting young blonde haired women. It soon becomes obvious that The Blonde Killer has an unhealthy obsession with the h.

Right now, I have just finished another romance story called A Surrogate Love Affair, and I’m heading straight into another project. I also have two trilogies to complete. One is a YA paranormal involving angels, and the other is the above mentioned Take series.

As far as letting my family read my books, apart from my sister’s, everyone else is a no-no, lol. I am going to let my son read my paranormal books once they are finally finished, though. I’m rather nervous about that, but also interested in what he will say about them.

♥ Do you cry when writing an emotional scene? Or laugh when it’s funny? Because when “you know who” died in Deviant I was bawling like a baby!

I must admit, I cried at that scene too. I got emotionally attached to that character, so it was hard when that character died. I also cried when I wrote the cemetery scene in Redemption. As an author, you do get emotionally involved with every book that’s written. As far as laughing, there is that too. Once I’ve finished the first draft of a book, I’ll read over it before submitting to betas or my editor. Sometimes there will be things I have written that didn’t make me laugh at the time, but once I read it over, I do have a little giggle. 😉


♥ What makes you decide to speak about something? Where do you get your ideas for the plots? You write very different books and I love that about you. I never know if I will get hot but still sweet somehow (Deviant; A Step Two Close), hot and suspenseful (Scars), hot and playful (Luca); hot and a little twisted (Chained) or hot and very twisted/sick (Siren) (notice the constant hotness of your books  😛   )

Lol, well I’m glad they are all “hot.”  😉 A lot of the time plots come to me in dreams. Take a Breath, Deviant, and Siren came to me in a dream. Sometimes plots come to me when simply discussing things with husband and kids. We discuss all sorts, and sometimes I start to think on things that have been said and build on it in my head.

♥ Is there something you would never write about? Something you’re dreading? Because so far you’ve pushed many boundaries and don’t bat around the bush, especially with Siren so is Jaimie a daredevil or does she have limits?

I think I would write anything, as long as I know it won’t offend people. I realise Siren might offend some, but that book took hold of me for 28 days straight. I lived and breathed Scarlet day and night. I simply couldn’t stop until I’d finished.

I would say I was quite a versatile author. I write anything that grabs me. I think if I wrote too much of the same thing it would become boring. I think I like challenging myself.

Sometimes, I like to change a character midway through a book, lol. As far as how I build them, I like to think about my plots for a few days before I start to write. Any quiet moments in the day, I will go off in a daydream and picture the scenes, what the characters say and do, etc.

♥ What’s your writing process? Do you feel a compulsion to write and can’t stop before it’s all on the paper or can you store it in your mind and wait to be seated at your desk later?


I’m terrible once I get into a book I’m writing. I think my husband would vouch for me when I say that I’m physically there, but that’s about it. I tend to invest in the book so much that I can’t stop thinking about them. However, I think I am getting better. I’ve recently been diagnosed with Degenerative Disc Disease, so other priorities take precedence now. I did have a big break from writing once I became ill, but I’m on the mend now. Instead of forcing myself to write 5,000 words or more a day, I take it step by step. It’s what I need to do for my health.

♥ What‘s the most difficult book you had to write so far and the easiest one? Why?

The most difficult and easiest book to write was Siren.  Difficult because of the childhood abuse she suffered, but also easiest because it grabbed a hold of me so much that it took less than a month to finish.

My favourite male character is Dean. I think I agree with you on Clara. I like her character as she was feisty and didn’t take any shit from anyone.

♥ Do you have any advice for aspiring authors?

I’m going to say what I advised an aspiring author recently when they asked me for advice. Don’t jump in straight away. Take a few days out to prepare and develop your scenes and characters. Write notes, if need be, but don’t force it. I think you will find once you do sit down in front of the laptop and start typing it’ll flow naturally. It’s actually a wonderful feeling reading over a scene I’ve had in my head for days. I’m sure other authors feel exactly the same. 🙂


♥ What will your next book be about?

Possession is the next book due for release. I’m waiting on my editor to get the book back to me, but I think it won’t be long now. Possession is another dark story about a girl who is bought by a gangster. She doesn’t like him, and resists him every time he’s with her, but she can’t help the way her heart and body feels when she’s near him.

Shortly after that will be A Surrogate Love Affair. That book took me well over a year on and off to write. I think it’s because it’s unlike anything I’ve written before. It’s basically about a married woman who offers her infertile best friend a chance to have a baby. She becomes their surrogate, but on the day she finds out she’s pregnant she discovers something that turns her world upside-down.

♥ What authors/ books have you really loved and would you recommend?

I’m big fans of Jodi Ellen Malpas, Colleen Hoover, Mia Sheridan, and Abbi Glines. I have loved most of their works. As far as recommending books, I would definitely go for This Man series by Jodi Ellen Malpas, Hopeless and It Ends With Us by Colleen Hoover, Archer’s Voice by Mia Sheridan, and the Too Far series by Abbi Glines. I would also recommend a few of dark books. I loved Raze by Tillie Cole, Pretty Stolen Dolls and Pretty Lost Dolls by Ker Dukey and K Webster, and Into the Darkest Corner by Elizabeth Haynes. That book definitely messes with your mind. 😉