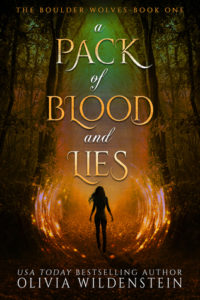 The primal rule of winning: don’t fall in love with the contender. Three months shy of her eighteenth birthday, Ness is forced to return to Colorado. Even though it’s been six years, and the wolves of her all-male pack don’t recognize her, she recognizes them. People who shun others because of their gender are hard to forget.

Especially Liam Kolane—son of Heath, the crudest and cruelest Alpha to have ruled the Boulder Pack. Liam is as handsome as he is infuriating, as kind as he is punishing, and he makes Ness’s traitorous heart race, which isn’t good. After all, he’s a Kolane. Like father like son, right?

When Heath dies, Liam vies to become the new Alpha and no one dares challenge him.

Fans of Kresley Cole and Cassandra Clare will devour A PACK OF BLOOD AND LIES.

* Contains Alpha males.
* Not suitable for children under 14.

Years ago I read Rose Petal Graves and was really taken by that story. It mixed legends, thriller, small town and fantasy. The author really created a gothic atmosphere. Her characters were mysterious and in all shades of grey.

When Olivia Wildenstein messaged me to ask if I would be interested in getting a copy of A Pack of Blood and Lies I read the blurb and I was on board immediately!

She has been very patient with me as it took me months before I had an opening in my reading schedule! But when I began the story…I couldn’t stop reading.

I had not realized how I missed good shifter stories with pack’s complicate business and a female character needing to prove her worth to a bunch of misogynistic big wolves!

This is one of these fast, effortless reads backed by a good cast of characters and plot filled with secrets and surprises.

Ness has just lost her mom when her late father’s family blackmail her in going back to Colorado, home of the Pine Pack.
She is not happy at all as the pack kicked her out years ago, never accepting that the sole female wolf could join them and train like men.

The pack’s former Alpha was not the alpha you often read about protecting all pack members. No Heath did not hesitate to rape females.
Now that he died (there is a secret to unearth there) a new Alpha must be selected.

When Ness learns that the only one running for the title is Liam, Heath’s son she asks to enter the competition because like father like son right?

Ness is strong but not perfect! She is not the undefeated stereotypical badass. But she is cunning, courageous and proud.
I loved seeing her taunting “the boys”. She gave them a run for their money!

Add to this:
– heavy tension between her and Liam where you did not know if it was antagonism or attraction;
-an older friend obviously feeling more than brotherly towards Ness ( my bet is on unfinished business there in the next instalment);
– secrets plural about her father’s death, Heath’s death, the lack of female werewolves, the designs of the rival pack’s Alpha suddenly very chummy with Ness;
-competitions to win
And you have a fast paced, action filled and very engaging shifter story!

Do you love shifter stories? Have you read Olivia’s stories before?