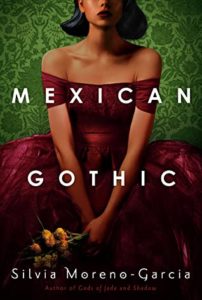 NEW YORK TIMES BESTSELLER • An isolated mansion. A chillingly charismatic aristocrat. And a brave socialite drawn to expose their treacherous secrets. . . .From the author of Gods of Jade and Shadow comes “a terrifying twist on classic gothic horror” (Kirkus Reviews) set in glamorous 1950s Mexico. “It’s Lovecraft meets the Brontës in Latin America, and after a slow-burn start Mexican Gothic gets seriously weird” (The Guardian).

After receiving a frantic letter from her newlywed cousin begging for someone to save her from a mysterious doom, Noemí Taboada heads to High Place, a distant house in the Mexican countryside. She’s not sure what she will find – her cousin’s husband, a handsome Englishman, is a stranger, and Noemí knows little about the region.

Noemí is also an unlikely rescuer: She’s a glamorous debutante, and her chic gowns and perfect red lipstick are more suited for cocktail parties than amateur sleuthing. But she’s also tough and smart, with an indomitable will, and she is not afraid: not of her cousin’s new husband, who is both menacing and alluring; not of his father, the ancient patriarch who seems to be fascinated by Noemí; and not even of the house itself, which begins to invade Noemi’s dreams with visions of blood and doom.

Her only ally in this inhospitable abode is the family’s youngest son. Shy and gentle, he seems to want to help Noemí but might also be hiding dark knowledge of his family’s past. For there are many secrets behind the walls of High Place. The family’s once colossal wealth and faded mining empire kept them from prying eyes, but as Noemí digs deeper she unearths stories of violence and madness.

And Noemí, mesmerized by the terrifying yet seductive world of High Place, may soon find it impossible to ever leave this enigmatic house behind.

“It’s as if a supernatural power compels us to turn the pages of the gripping Mexican Gothic.”—The Washington Post

This was a book club read. I don’t usually read horror or stories with ghosts but as The Sun Down Motel had ghosts and I loved it, I thought it would be good to push my boundaries.

And what better way to go for an out of comfort zone read than with read buddies right?

Well I must be honest here: I skimmed some parts by the end of the book because it really went all down the horror road and I am a big chicken!

There, I said it.

I think that author is extremely gifted.

She built the mood, step by step, word after word, slowly ensnaring me in that gothic story.

At the beginning of the book, we meet Noemi, paying the vapid socialite. She is quite flighty and changes hobbies, boyfriends and interest on a regular basis.

Her dad loves her but holds no illusion about her daughter.

“She wanted to be liked. Perhaps this explained the parties, the crystalline laughter, the well-coiffed hair, the rehearsed smile. She thought that men such as her father could be stern and men could be cold like Virgil, but women needed to be liked or they’d be in trouble. A woman who is not liked is a bitch, and a bitch can hardly do anything: all avenues are closed to her.”

Yet she wants to attend university as she feels she has found her calling and makes a deal with her father.

Her father got an alarming letter from Noemi’s orphaned cousin weeks ago. He contacted her husband who was reassuring but Noemi’s dad does not feel at ease.

He wants her to go visit her cousin in a small town in Mexico and see if she needs help or not. If Noemi agrees, she’ll be allowed to go to the university.

When Noemi arrives in the small town, she is whisked away in a very old car to go to her cousin’s house.

“Francis drove up a narrow road that climbed deeper into the mountains, the air growing rawer, the mist intensifying. She rubbed her hands together.”

The house is an old mansion and in need of repair. There is mold everywhere. There is no electricity and you can’t open the windows.

That first evening when she dined with her cousin’s husband Virgil, his aunt, cousin and his father set the tone. This was an eerie dinner. Everyone in that family felt vaguely threatening except the youngest cousin Francis.

That’s also when you realize that Noemi is no fool and does not lack backbone, socialite an all! I never thought navigating parties would arm you with weapons to hold your ground faced with big men.

I loved that Noemi was far more than a vapid socialite. She had a sharp mind and would not be fooled. She also had a very no nonsense attitude.

Noemi is only allowed to see her cousin Catalina from time to time. Catalina soon tells a hushed story of walls listening, ghosts, people spying on her all the time. She has alarming statements like ““It lives in the cemetery. You must go to the cemetery”.

When you combine strange dreams, stories of ghosts, fog around the house, a tragic pas where miners died from sickness and stranger moving shapes on the wall, you get a story shrouded in mystery and slowly gliding into horror.

The mood was tense, oppressive. The building of the tension was flawlessly executed. I was wondering all the time what the mystery was.

And when we got a big reveal, I just wanted to throw up!

I told you I have a delicate heart!!!

That’s the part I skimmed, reading several words on the pages to be able to follow the story. Kind of like when you hide behind the couch while the family is watching an horror movie and you peek through the slat from time to time because you “JUST HAVE TO KNOW” but each time, you regret this because you just realize that there is no way you’ll forget and be able to sleep for at least six months!!!!

Sorry for the long sentence here above but I was totally creeped out!

If you love gothic stories with a good dose of horror, atmospheric stories, then go for it!

Have you read it? Do you love horror stories?