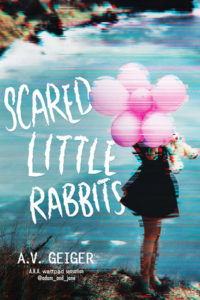 We stand in a tight cluster, high above the lake. One-by-one, we made our way up the narrow trail from the edge of campus. Now, we wait shoulder to shoulder behind the police tape. Nineteen summer students.All but one.

When Nora gets accepted into her dream summer program at the prestigious Winthrop Academy, she jumps at the chance to put her coding skills to use. But then a fellow student goes missing—and the tech trail for the crime leads back to Nora. With no one else to trust, Nora must race to uncover the truth and clear her name…or she might be the next to disappear.<div

This book goes crescendo with a last part that will have you grip the edge of your seat when the tension culminates and the mystery unravel. I read it till 2 AM in the morning as I was glued to the pages!

Scared Little Rabbits is a YA mystery/crime happening in the span of three weeks at summer camp for geek  the “Winthrop Academy Summer Maker Program”.

Nora is your very socially awkward geeky teenager. She is genius at coding and worked hard to get that place on the Fair Maker summer camp at the prestigious and private Winthrop Academy.
She was a very endearing character. One that as a mom I wanted to encourage when she was always overlooked by her peers because she was on the very shy scale when confronted with her summer classmates.

She felt transparent. She was the nerdy wallflower. The first scenes with Nora being talked about but not talked to, given a patronizing nickname  like “Lowercase” was perfect to make us remember   what it was being in high school when you were not members of the “school royalty” clique.

“He never really saw me. Neither did those girls I passed back there. Are we sensing a theme yet? I don’t know why, but people tend to overlook me. I swear if I had a superpower, I know what it would be: invisibility.”

She is the new kid at the Maker Program, a little fish in a sea of posh sharks and she stood out like a sore thumb!

But Nora is brilliant at what she does! She lives for coding and robotics is her passion!

“I’m not the only girl on the planet who makes robotic landscaping equipment for fun, am I?”

Thanks to that gift she will soon be enrolled to give a hand on a “sure to win” project! She will work  with  “High and Mighty” controlling Eleanore Winthorp, “Single minded and focused driven” Reese and “Ubercute charmer” Maddox.
They need her skills and the prospect of being on this advanced project is enough for Nora to mostly overlook the contempt she gets from Eleanor and Reese.
It does not help either that Maddox seems to have taken a liking to Nora at the great fury of his Girlfriend… Eleanor!

From the opening scene we know right from the start that a murder or a something terrible happened to a student. All students of the academy are gathered atop a cliff to witness the police retrieving something or someone from a lake down below.
We brace ourselves as we know this whole story will lead to that moment and that killers are probably on the loose.
But who did it? And why?

I guessed who did it but late in the story. Nearly when we would have known anyway. A.V. Geiger did a great job erasing her trail and sending us on goose chase.
Take Maddox for example. I never knew if he truly liked Nora or played a twisted game. Each time I thought he was a great guy I was thrown on a loop, doubting everything once more.
Eleanor was also a mystery with her unsend and erased messages in the dropbox. You could see that she was hiding something but what? I never liked her conniving and blackmailing ways but maybe this was all an act and there was more to the true Eleanor?

In this story I liked:
-the concept of working on augmented reality project through the InstaLove app. I think it set the story in today’s teenage life and interests. It also delivers some important messages about how you can lose yourself in a very addictive virtual world, perfect venue for shy and awkward teens. It’s so much easier to interact hiding behind your augmented avatar. Nora 2.0.
It also showed the dangers of such games if they are hacked or altered.

– Nora. She was very relatable and felt “real”. A.V. Geiger took the time and care to flesh out her character is such way that you can’t help but think about the shy nerdy girl next door. I also loved her sarcasm that we got to enjoy when she was having her inner dialogs. Self-deprecating.

“I actually sounded friendly there. Weird. I suppose that happens once in a while. In moments of high awkwardness, random words come out of my mouth—unpredictable, but occasionally friendly.”

–the other characters portrayed to confuse you and have you guessing at if they were friends or foe!

-the mystery and the dramatic ending! My heart was beating frantically! I love grand finale!

I want to thank Sourcebook Fire for gifting me this copy through Netgalley. It had no influence on my willing and always honest review.

Have you read A.V. Gegeir’s books? Do you love YA mysteries?