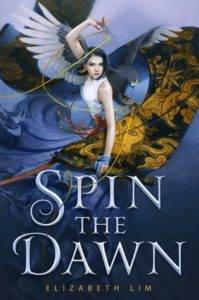 Project Runway meets Mulan in this sweeping YA fantasy about a young girl who poses as a boy to compete for the role of imperial tailor and embarks on an impossible journey to sew three magic dresses, from the sun, the moon, and the stars.Maia Tamarin dreams of becoming the greatest tailor in the land, but as a girl, the best she can hope for is to marry well. When a royal messenger summons her ailing father, once a tailor of renown, to court, Maia poses as a boy and takes his place. She knows her life is forfeit if her secret is discovered, but she’ll take that risk to achieve her dream and save her family from ruin. There’s just one catch: Maia is one of twelve tailors vying for the job.

Backstabbing and lies run rampant as the tailors compete in challenges to prove their artistry and skill. Maia’s task is further complicated when she draws the attention of the court magician, Edan, whose piercing eyes seem to see straight through her disguise.

And nothing could have prepared her for the final challenge: to sew three magic gowns for the emperor’s reluctant bride-to-be, from the laughter of the sun, the tears of the moon, and the blood of stars. With this impossible task before her, she embarks on a journey to the far reaches of the kingdom, seeking the sun, the moon, and the stars, and finding more than she ever could have imagined.

Steeped in Chinese culture, sizzling with forbidden romance, and shimmering with magic, this young adult fantasy is pitch-perfect for fans of Sarah J. Maas or Renée Ahdieh.

“Because of them, she gave us the world as we knew it. Day after day and night after night, she spun the dawn and unraveled the dusk.”

First of all allow me to thank @PRHGlobal/@prhinternational for my free copy! I had a fantastic time!

I know the synopsis compares it to Project Runaway and Mulan but the competition between the tailors made me think of The Great British Sewing Bee but with meaner competitors!

This story is that of a young woman who helped her father, the best tailor in the country. Maia was a little girl when she sewed and embroidered for the first time, loving it and making her dad so proud of her!

Her three older brothers had other interests but Maia already had found he passion.

Years later when her mother died and when the war took her two older brother’s life her father was devastated. It was Maia, the obedient and dutiful daughter who ran the shop and brought food on the table.

When an emperor’s eunuch comes to their shop requesting that her father enter a competition to choose the next imperial tailor she knows that her father is too weak to make that travel.

Yet no one refuses a summon from the emperor!

Maia always dreamt to prove what she could do.

It was so unfair that girls could not become master!

On a dare she’ll disguise herself and assume her younger brother Keton’s identity.

But when she enters the competition, every betrayal and foul play will take place!

And the last task is an impossible one that will send Maia on a hard and incredible journey, accompanied by the emperor’s enchanter: Edan.

Now that you know more about the story, let’s get to what I loved about Spin the Dawn and why you should read it!

You should read Spin the Dawn if you love:

This universe was filled with magic, silk  garments taking us to the Silk Road, mesmerizing emperors, ghosts, demons, enchanters ….

Maia was “the strong one” but without fanfare! She was a girl who was disguised as a man and she did not want to draw attention for fear of being unmasked! It would have been death penalty!

She loved sewing and embroidering in silence. She worked long hours without complaint, absorbed by her craft.

Dutiful daughter she wanted to protect her father and make her brother happy again.

Yet she was not without fire and she dared defying the enchanter, Edan.

She was far from a quitter when given a task and she’ll overcome hard trials to accomplish her task, hoping to save the empire.

Edan was a very powerful enchanter. Very old but wearing the face and body of a young man.

Mysterious and vaguely menacing to Maia’s eyes in the beginning he’ll soon show a particular interest in the young tailor. No one can fool an enchanter and he recognized Maia for the girl she was and for …something else!

Edan is very closed off about his past for a long time, only showing his “business” face but when we learned more about his childhood he’ll become more human, with a soft core beneath the enchanter’s bravado!

Of course as in many fantasy stories you have a quest, here Maia’s ordeal. I will take her on a journey that will leave a deep mark on Maia, forever altering her future! You could nearly compare this to Hercule’s labors.

My only complaint is that I hadn’t realized this was part of a series and now I have to wait for the second book to know more!

I was afraid of the hype around this book but now I can say that all that fuss is deserved!

I had a wonderful time reading Maia’s story and fight to prove that, yes, a girl can sew like the best male tailor!

Have you read it? What do you think about asian tales?