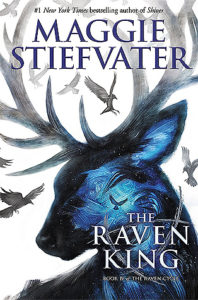 The fourth and final installment in the spellbinding series from the irrepressible, #1 New York Times bestselling author Maggie Stiefvater.All her life, Blue has been warned that she will cause her true love’s death. She doesn’t believe in true love and never thought this would be a problem, but as her life becomes caught up in the strange and sinister world of the Raven Boys, she’s not so sure anymore.

What a finale! And what a series! I can’t wait for Call Down the Hawk!

Spoiler if you haven’t read the other books don’t read this review as I’ll be unable to avoid revealing some elements from past books!

Let’s do this review in a different fashion and use some quotes to guide my thoughts!

This book is the darkest of all.

The boys and Blue will have to fight a huge threat and people will die! Something terrible will happen to Cabeswater too. Tremble friends because evil is lurking in many corners!

There will be magic, dark magic, dying and horror!

But also love and bravery. Friendship and comradery.

“Now that Adam had fully opened his senses, Cabeswater clumsily attempted to communicate with its human magician.”

Adam. Adam has evolved enormously from the first book.

In the beginning, he was silent, beaten and too proud to accept any help from Gansey. He wanted to be a self-made man. In the third book he was prone to anger and violence. He had me afraid he would be like his father somehow. He was also new at that magician business.

Now he has reached a whole other level! He really knows what he is doing with magic and will be a pillar to Ronan and Gansey several times when the situation becomes very dangerous!

He will also make peace with the idea to get some help without it meaning he had to feel inferior.

And he will find some happiness but no telling more about it.

“Was Ronan even human? Half a dreamer, half a dream, maker of ravens and hoofed girls. No wonder his Aglionby uniform had choked him.”

In the beginning of the series I was all Ronan Lynch. Then in Lily Blue it was Gansey Gansey Gansey. And now …it’s a tie!

Ronan finally shows his vulnerable side and his kindness in this one. He is rough but that’s because he does not want to show that he cares and can love.

He’ll have happy, very happy moments in this last story. But also, tragic and soul destroying ones. He will be tested like Gansey, Adam and even Blue will be tested.

This last book truly is a test of faith and courage.

““Why would you go alone?” Blue asked. She flung her arms around him, and he felt her trembling. “I was trying to be heroic.” Gansey said.”

Gansey is noble as ever.

There is something inherently kingly about Richard Gansey the third.

He commends without ordering but in asking.

He would never ask something from someone else if he was not ready to do it. He will always want to spare the others. He will face his fate.

In two words now: read it!