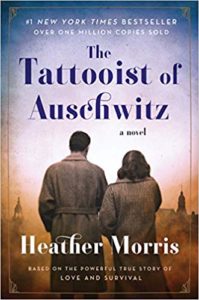 In April 1942, Lale Sokolov, a Slovakian Jew, is forcibly transported to the concentration camps at Auschwitz-Birkenau. When his captors discover that he speaks several languages, he is put to work as a Tätowierer (the German word for tattooist), tasked with permanently marking his fellow prisoners.Imprisoned for more than two and a half years, Lale witnesses horrific atrocities and barbarism—but also incredible acts of bravery and compassion. Risking his own life, he uses his privileged position to exchange jewels and money from murdered Jews for food to keep his fellow prisoners alive.

One day in July 1942, Lale, prisoner 32407, comforts a trembling young woman waiting in line to have the number 34902 tattooed onto her arm. Her name is Gita, and in that first encounter, Lale vows to somehow survive the camp and marry her.

A vivid, harrowing, and ultimately hopeful re-creation of Lale Sokolov’s experiences as the man who tattooed the arms of thousands of prisoners with what would become one of the most potent symbols of the Holocaust, The Tattooist of Auschwitz is also a testament to the endurance of love and humanity under the darkest possible conditions.

“The Tattooist of Auschwitz is also a testament to the endurance of love and humanity under the darkest possible conditions.”

Sometimes I don’t have better words than these of the synopsis to express the essence of a book.

This is a book of survival and it was a punch in the face.

I think I’ll never get used to the atrocities committed against mankind in WWII. I know other persecutions existed after WWII but this always hits so close to home thanks to my great grand-mother stories.

Every time I read a story about WWII focusing on what the Nazis did, I am overcome with so many emotions and this read was no exception.

Rage. Impotent rage! Overwhelming rage. Because HOW COULD THEY? I can’t believe that these men, these SS present at Auschwitz and Birkenau, did not know that what they did was wrong! I just simply can’t fathom how men could inflict this on mankind!

Every time that I read about Dr Mengelei, how he lurked around Lale, what he did to Leon and to all these young women I just want to vomit.

Every time Lale had to agree with his guard, every time he had to turn his eyes downcast as not to attract attention and the ire of some SS I was trembling with rage.

And when Silka had to do what she’s done, just because she wanted to survive, I was horrified.

Sadness is another powerful emotion. Sadness for all these men and women who were promised that their families would be safe if they followed the Nazis, just to arrive after unbearable days in a train car meant for cattle in a camp and be deprived from all their belongings. Sadness because they were born in the “wrong” belief or had another skin tone or another sexual preference or …

Sadness for Lale. Because he too did what he had to. He made a promise at the very beginning: to survive. And that’s what he did. Tattooing other prisoners. Reducing someone’s identity to a number is dispossessing of his humanity. He has no name anymore. He has become a number. That’s so much easier to defile and kill a number than a person.

Respect and admiration. Luckily some positive emotions too. Respect and admiration because amidst the chaos, amidst the savagery, the degradation and the humiliation many helped each other. Many tried to retain some dignity. Many clung to their humanity. This was the last shred of their identity as human being. Braving the danger like Lale did to buy food and share with the other prisoners was something that I will always be in awe of.

Knowing that this exceptional story Is inspired if not an exact retelling of what Lale, Gita, Silka and many others lived is poignant. And looking at all that happens in today’s world with the refugee crisis, some politician with wrong morals promising to “separate” his country thanks to a wall makes me despair in mankind. When will we learn? When will we stop repeating the past’s mistakes?

Sorry for this heartfelt review that did not give you many information about the book but as you can see, if one thing is certain about The Tattooist of Auschwitz, it’s that I was totally immersed in its world and deeply affected by Lale’s extraordinary and horrifying story. I recommend that book to everyone because we have to be educated about what happened in order to never relive it again.

Just some words about the narrator as this was an audiobook. I have since learned that Richard Armitage is a famous actor and voice actor but his interpretation did not convince me. Or at least not for a long time and I would probably have loved this book even more if I simply had read it instead of listening to it.

Have you read that story? Or Cilka’s story already?