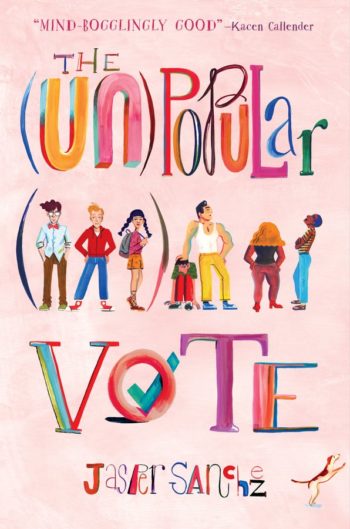 Vaseline on the teeth makes a smile shine. It’s a cheap stunt, but Mark Adams knows it’s optics that can win or ruin an election.Everything Mark learned about politics, he learned from his father, the congressman who still pretends he has a daughter and not a son. To protect his father’s image, Mark promises to keep his past hidden and pretend to be the cis guy everyone assumes he is. But when he sees a manipulatively charming candidate for student body president inflame dangerous rhetoric, Mark decides to risk the low profile he assured his father and insert himself as a political challenger.

One big problem? No one really knows Mark. He didn’t grow up in this town, and he has few friends; plus, the ones he does have aren’t exactly with the in-crowd. Still, thanks to countless seasons of Scandal and The West Wing, these nerds know where to start: from campaign stops to voter polling to a fashion makeover. Soon Mark feels emboldened to get in front of and engage with voters—and even start a new romance. But with an investigative journalist digging into his past, a father trying to silence him, and a bully front-runner who stands in his way, Mark will have to decide which matters most: perception or truth, when both are just as dangerous.

Thank you Harper360YA for sending me an ARC of this story!

As usual, this has no influence whatsoever on my review as I write them for YOU, readers, and not for authors or publishers.

When I saw the blurb of the Unpopular Vote, I was immediately attracted to it as it had two of my favorite elements in books:

Did it live up to my expectations?

In some ways but not totally. That’s why I’ll go with a “What I Liked” and “What didn’t work foe me” review. I use “didn’t work for me” because every review is personal and what did not work for me could very well work for you.

-the trope “fight for a better world “, and “believe in the best of people”.

Maybe I am naïve but I am one of these people who prefer killing others with kindness. I am someone who believes that the majority of people are good people and that what we see in the media only reflects a minority. But they are louder and that’s why we seem to only hear them.

When Mark wanted to make Utopia High School a better place for all the kids, wanted to work with them, believed in them, I was all in.

And when Ralph added “We must build this world from love”, I believed in it.

I really loved that tight knit bunch of IB students banding together to help Mark’s campaign. I loved learning about the personalities, their differences, their fights.

Jenny and Pablo were my favorites of the bunch, and so supportive or Mark. Benji also surprised me more than once with his courage and maturity.

Because that’s how parents should be for their kids. Especially when they come out and we know that the world won’t make it easy on said kids.

Opposed of course to Mark’s dad who was a complete let down and dare I say “his loss” right?

Mark went into that election for a valid reason but he led the campaign as any politician would do. That was first class work but… didn’t ring entirely true. Until Mark faced some brutal truths about himself and his dad. He faced it head on and became a better person. He grew up. He didn’t try to shy away from the truth, he just admitted his limitations, that he had been wrong and he changed.

What didn’t work for me

-I confess that I was equally amazed and lost at the debates and rhetoric in this book.

I mean, these are seventeen years old students (some are even fifteen) and yes, I know they all vie for Ivy league colleges as they are IB students. But their debates about politics, the references about senate candidates, and words like “arbitrary ideological purity test” and names like Jed Bartlet had me…lost and awed at the same time.

I found fascinating the backstage references of building and running a campaign but at the same time, I wondered if this was real. This seemed a little bit too sophisticated.

Could kids around seventeen or eighteen talk and think like that? Build a campaign like that, poll people, make graphs,…???

I knew they were sons of politicians, lawyers etc. but it did seem a little too mature for these to be YA characters. Again, I might be wrong and maybe it’s the normality for kids in private high schools in the US. What do I know from my European experience?

–if I went into this because it was LGBTQ and I wanted to learn more about all the differences, I sometimes was lost with all the sexual preferences nuances.

But then I would learn about biromantic, asexual, pansexual but not always with a lot of explanations. I think for things to really be engraved in my thick skull I would have appreciated a little bit more details about all these preferences. More scenes with Pablo dating but not “putting out”. What did that mean exactly? What was it to be in his head and have his narrative? The same with Jenny ‘s inability to be in a relationship.

Also what does that really mean to be trans going from a female body to a male body? What are the different options? What are the consequences? I think this is a big part of the way to becoming your true self and I still don’t know much about it.

I guess I’ll have to keep reading books about it 😊

As you can see, The Unpopular Vote has lots of merits and if you like these kind of stories, I think you should give this book a chance. Especially if you are not an “overthinker” like I sometimes am while reading.

Thank you Harper360YA and Epic Reads for sending that book!