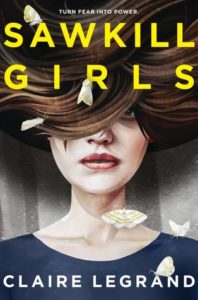 Beware of the woods and the dark, dank deep.He’ll follow you home, and he won’t let you sleep.

Who are the Sawkill Girls?

Marion: the new girl. Awkward and plain, steady and dependable. Weighed down by tragedy and hungry for love she’s sure she’ll never find.

Zoey: the pariah. Luckless and lonely, hurting but hiding it. Aching with grief and dreaming of vanished girls. Maybe she’s broken—or maybe everyone else is.

Val: the queen bee. Gorgeous and privileged, ruthless and regal. Words like silk and eyes like knives, a heart made of secrets and a mouth full of lies.

Their stories come together on the island of Sawkill Rock, where gleaming horses graze in rolling pastures and cold waves crash against black cliffs. Where kids whisper the legend of an insidious monster at parties and around campfires.

Where girls have been disappearing for decades, stolen away by a ravenous evil no one has dared to fight… until now.

How does someone review a sample if not by telling if it did made me want to read the book right?

Well my Sawkill Girls sample (that I foolishly hoped would be the whole book) was like that one lone chocolate truffle you eat after your meal with your coffee: not enough. You immediately crave for a second then a third serving. Before you realize it you’ve eaten the whole box of truffles!
In other words: I need more words! I need the whole book!

I discovered Claire Legrand’s writing with Furyborn and was instatly smitten, pulled into the magical realmshe had created.
The same happened with Sawkill Girls.

Claire Legrand has the knack to reel you into her stories from the first sentences.

I won’t speak about the plot as you can read the synopsis but rather about what the sample made me feel, expact  and want.

The opening of the sample focuses on Marion who lost her dad in a car accident and is moving to Sawkill island with her depressed mom and her younger sister Charlotte.
In barely a few page I could already see and smell the island and its spooky atmosphere. I could portray Marion as the responsible girl, too old for her age. Shouldering responsibilities she should not. Not at her age.
This is followed by an action scene sending your heart galloping as wildly as the spooked horse Marion happened to sit on.
Then you have an element of mystery and horror thrown back to the mix because you are wondering “What is Val?”

This! This is what I love in Claire Legrand’s writing! Her mastery at changing pace in her story never losing her reader’s attention and never losing him or her either, period.

I predict friendship between Zoey and Marion.

I predict Marion being something special too *what with her sudden headache arriving on the island and her screams of “Make it Stop!”

I predict Val being so much more than the polished Queen Bee when I read sentences like: “and awoke Val’s deep-gut-appetite that belonged to herself, a little, but mostly to him.”

I predict…a hole in my wallet LOL.

Have you already read a whole ARC of the book? Or do you want to read it now?