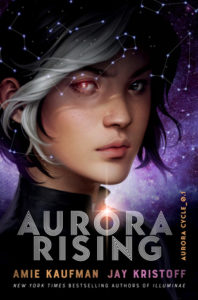 From the internationally bestselling authors of THE ILLUMINAE FILES comes an epic new science fiction adventure.The year is 2380, and the graduating cadets of Aurora Academy are being assigned their first missions. Star pupil Tyler Jones is ready to recruit the squad of his dreams, but his own boneheaded heroism sees him stuck with the dregs nobody else in the Academy would touch…

A cocky diplomat with a black belt in sarcasm
A sociopath scientist with a fondness for shooting her bunkmates
A smart-ass techwiz with the galaxy’s biggest chip on his shoulder
An alien warrior with anger management issues
A tomboy pilot who’s totally not into him, in case you were wondering

And Ty’s squad isn’t even his biggest problem—that’d be Aurora Jie-Lin O’Malley, the girl he’s just rescued from interdimensional space. Trapped in cryo-sleep for two centuries, Auri is a girl out of time and out of her depth. But she could be the catalyst that starts a war millions of years in the making, and Tyler’s squad of losers, discipline-cases and misfits might just be the last hope for the entire galaxy.

They’re not the heroes we deserve. They’re just the ones we could find. Nobody panic.

How am I supposed to wait months (I bet a year) for the sequel?

And why did you do ”IT” Jay and Amie (those who have read will know)? How could you?!?!

Where did you get these ideas? And I don’t speak of all the alien species but about the plot and the big reveal?

And how are they supposed to do it all on their own?

But most importantly: why am I always so weak/gullible/tempted to read the first book in a series when the whole series is not published yet???? I must be masochistic.

OK let’s rewind and give you something to think about that would make sense here.

Aurora Rising is a science fiction book *duh, could have fooled me I thought it was historical!* revolving around a squad of six seven teenagers or rather young adults.

We are in space, in the future and humans have met many alien species. Wars arose here and there and there are still threats so a peaceful force has been formed: the Aurora Legion. Think of it as the UN of space composed of humans and aliens.

Some alien races are the Betraskan (white skin, white hair, white eyes and living in tribes or big families with complex ties) and the Syldrathi (big elf looking beings with silver hair and violet eyes. Usually “Legolas hot” and some of them are War Breed as in lethal. They hate being touched so beware!).

The Squads are composed of:

An Alpha: the leader and strategist. In this story: the human Tyler;

An Ace: the pilot. The human Cat, Tyler’s best friend;

A Gearhead: responsible for repairs, maintenance, mechanical work. Kind of a whizz kid. The Betraskan Finian;

A Tank: tactical combat and engagement strategy. Don’t go on his bad side. The Syldrathi Kal (his name is waaay more longer and complicated Kaliis Idraban Gilwraeth, first son of Laeleth Iriltari Idraban Gilwraeth, adept of the Warbreed Cabal. Told you it was a mouthful!).

A Brain: responsible for scientific and medical duties. Often dabbles in dangerous experiments for the sake of science. Here she is the human Zila.

When the story begins we are following Tyler Jones, Alpha extraordinaire who will save a strange girl from a cryopod on a vessel doomed to be destroyed.

Heroics ensue but with consequences for our young hero as he can’t choose his squad and gets stranded with rejects, his sister Scarlet and best friend Cat aside.

The young human girl he rescued, Aurora or Auri, will soon appear ….”changed” from her loooong stay in the Fold. For better understanding, the Fold are places in the universe allowing you to travel huge distances in the blink of an eye.

Unwillingly Auri will force them all on a mad journey where the squad will face many dangers, will go so far from what they thought they would accomplish in the Legion and have them pull the impossible.

Between escaping your authorities that suddenly look not so friendly; facing nearly extinct monstrous creatures; evading missiles in space pursuit and embarking on a quest you don’t understand but just have to believe in you don’t have one dull moment!

I loved the action, the plot, the imagination the authors put in that story. The mystery to solve too!

I loved every personality of that crazy squad between the dutiful and inspiring alpha to the sociopath brain … and of course if Tyler was the archetype of the golden boy *with dimples!* I really fell for Legolas alias Kal! What’s not to love in a tall warrior with violet eyes protecting his beloved with all his strength right?

Zila is the one that remained the most mysterious to me and I bet we’ll get much more of her in the next book!

“The only places I fit are inside my head. It is as you said, sir. I don’t understand people. But I believe of all the places I have not fit, I fit here a little better.”

I loved the connection and the dynamics between these legionaires, the bonding that took place when faced with danger.

I loved the sarcasm, the craptastic jokes of Finn and the snarky comeback of Cat.

I loved every minutes of my read, except “IT”! And the cliffy of course.

Have you read it already? Or the Illuminae Files? Do you love science fiction books?