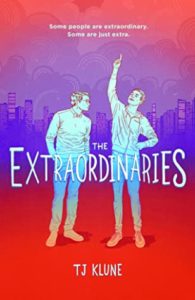 After a chance encounter with Shadow Star, Nova City’s mightiest hero (and Nick’s biggest crush), Nick sets out to make himself extraordinary. And he’ll do it with or without the reluctant help of Seth Gray, Nick’s best friend (and maybe the love of his life).

I vote for TJ Klune to write the next scenario for Marvel or DC movie!

OMG! I was laughing so hard! The humor and the banter in this book is amazing! It began very early on with a scene where Nick’s dad had a lube bottle on the table to talk about sex and ….LOL

So many scenes are funnily epic as Nick often puts his foot in his mouth! The narrator truly was excellent at impersonating a 16 young queer full of hormones yet innocent and blushing and fumbling and …

Sorry I am not very coherent I know!

I feel like Nick when he is hyper because he didn’t take his meds with all the words flying around in my head faster than I can order them to put them in an organized fashion on paper!

What’s the topic of the book in a nutshell.

We follow Nick, 16 years old and gay, living with his father who is a police officer. Pretty early on, we guess that his mother died a brutal death, leaving father and son alone and having to communicate together.

Special mention here on how TJ Klune wrote that relationship as the father is trying to be a good dad, loves his son to pieces but at the same time is an unmoving cop in some aspects.

Nick writes fanfics on The Extraordinaries! They are like your marvel and DC heroes and Nick is enamored with Shadow Star (cue the deep and rumbling voice of the narrator while dramatically pronouncing the name) who is the hero of Nova City while Pyro Storm is his sworn enemy.

Nick has ADHD and again, the author did a fantastic job writing about that topic. I know from experience as one of my kids suffered from it.

That means that without his meds, when Nick is hype, he’ll talk a mile a minute (and so did the narrator), will need to move all the time and will have crazy and sometimes dangerous ideas.

Nick’s character is one that you won’t forget and he is like none other!

A little bit crazy, a real drama queen, with emotions going through a roller coaster and a vivid imagination he is also deeply loyal and a really lovable character.

When Nick is being rescued from robbers by Shadow Star we will once again have an epic scene where I wanted to hide from shame for Nick all while laughing so hard the people around me on the street where wondering who that cackling mad woman was!

He will make his mission to become an extraordinary and will blurt the craziest ideas to his friends.

But Nick does not want to be an extraordinary only to impress, and maybe date Shadow Star.

No, below the light tone and humor, lies a deep and moving topic.

Nick wants to be different than what he is and stop disappointing his father.
He wants to become an extraordinary.
“I don’t want to say things before my brain can start to focus. I don’t want to take medication. I just want to be seen.”

Here comes another important and very endearing aspect of that book: the friendship!

We love books with great friendship like Harry Potter for example well, Seth, Gibby and Jazz formed a merry band of friends.

It also helped that Seth, Nick’s best friend had Nick feeling all hot and bothered without knowing why he felt like that! Haa young love and clueless teenagers!

I am stopping here but that book is another jewel and so different from anything that I have ever read. After “The House in the Cerulean Sea”, TJ Klune proves to be a very versatile and brilliant author!

I am so happy that we’ll have a second book!

I definitely recommend the audiobook here!

PS for those who have read it, do you recall the drag queen ring scene? I am still laughing out loud :-D))))