This is the second post in my YALC 2018 series and today I’d like to speak about fun anecdotes, acts of kindness etc. You’ll also get a short story about why I called the hotel reception at 3:30 AM….

1) First of all: who are the chatty authors?

Authors are like us. You have introvert and silent type or the extravert and chatty ones.

Of course signings are part of their business and they must attend but I guess for some it’s like a mini ordeal if they are relatively shy while for others you see they really adore meeting the readers.

I haven’t met all YALC authors so I’ll only speak about the ones I met and that I found super friendly and chatty.

Know also that depending of their editor some are “pushed” to sign faster if the lines get too big!

The special prize for kindness, enthusiasm and authentic personality goes to Alwyn Hamilton!

Not only does she write fantastic stories but she stayed one hour late to make sure EVERY fan could meet her! She was ticketed pretty quickly (see below about ticketing) I think she was the only one doing that.

She attended the whole three days even if she only signed one day. She was everywhere and chatted with everyone. She also loved trying to make gorgeous bookstagram at Hodderscape booth.

Alwyn has lived and studied in France and speaks French fluently (with a French accent) to my daughter’s greatest delight!

She loves wearing lipstick and immediately raved about my daughter’s lipstick (see just below). 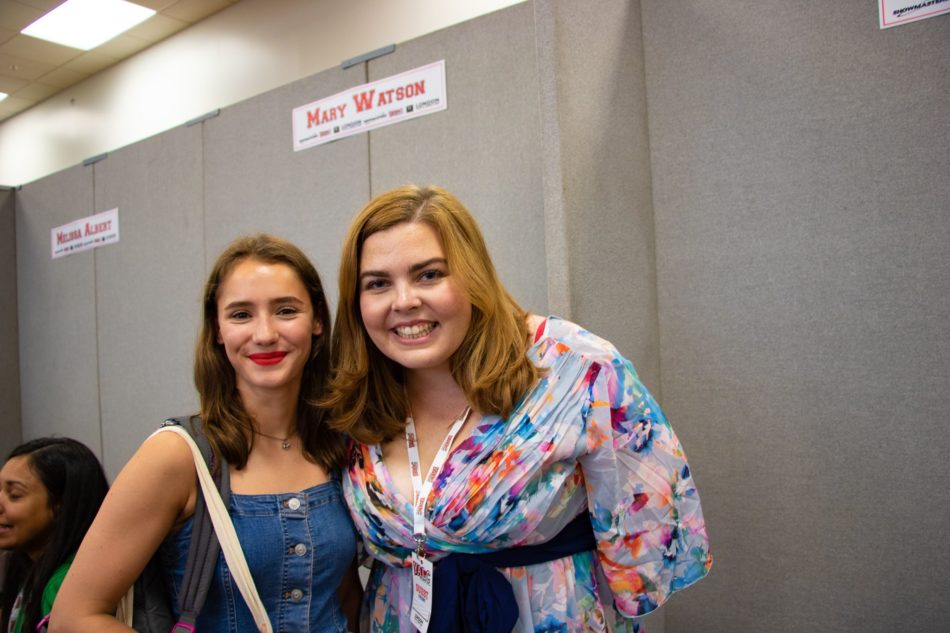 And me …much older 😀 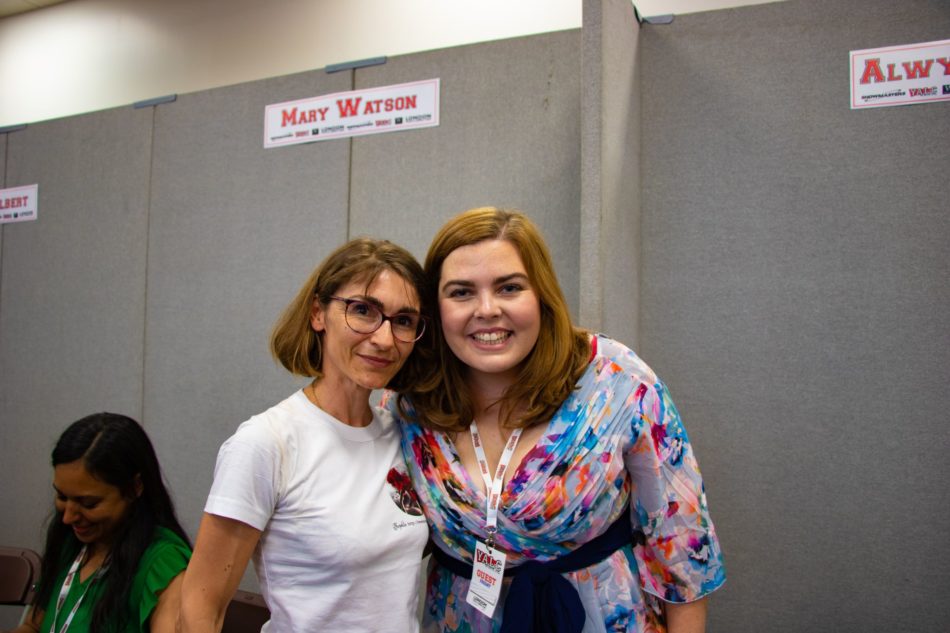 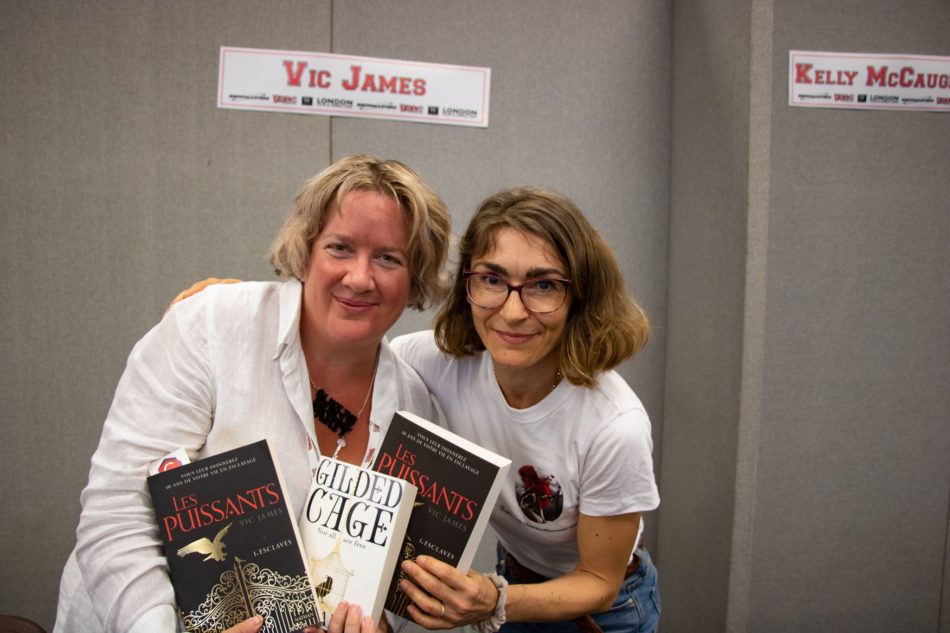 She didn’t have an extra long line so I thought I would be on time to see Akemi Dawn Bowman signing one hour later, just to the left of Vic James. WRONG! Little did I know that Vic James truly loves connecting with her readers and chatting books with them! What is a real asset for the reader was somewhat stressing as I figured that I would never get my book signed by Akemi. But… read below under “Acts of Kindness”.

When I met Vic James we had three books to sign from The Gilded Cage. One in English and two in French “Les Puissants”. As you may have read weeks ago I did a post comparing the covers from land to land and here again the English differs from the French cover.

Vic James told us she really loved the French cover. When asked if she got to choose the cover she told us that she gave pointers (what she thought should be on the cover based on the story) that the editor also gave pointers and that he had the last say! One day she gets the book in her mailbox and that’s it!

The same goes for the other traditionally published authors when I asked the same question.

For example with Dhonielle Clayton she confessed *shhhh don’t TELL!* that the French cover was her favorite. 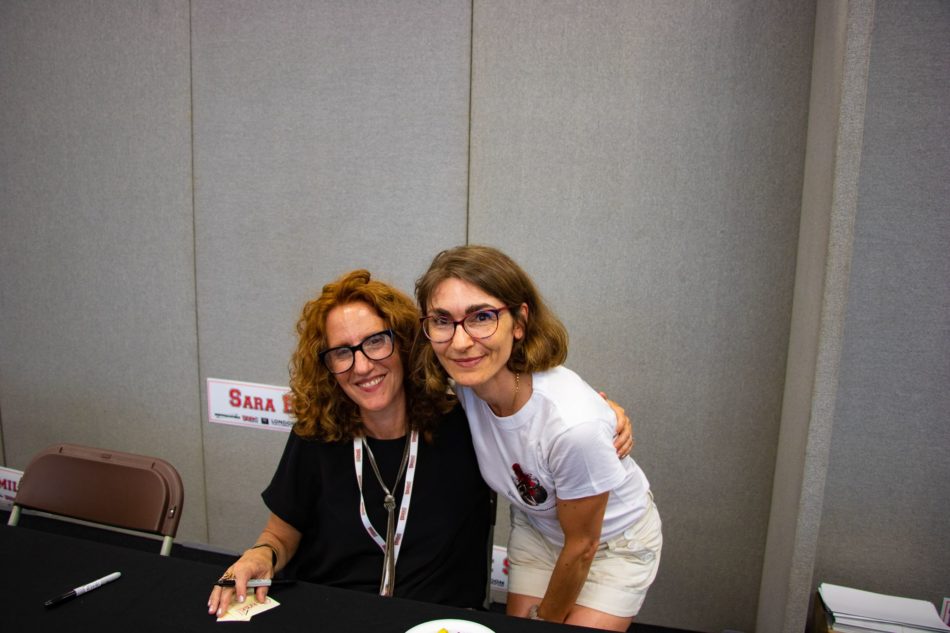 I attended a discussion panel about Friendship in YA stories and Gayle was one of the speakers.

You’ll learn more about that panel in a few days.

Just know that when I went to see her and have my book signed we resumed the discussion. She loves making people cry *she must have mean bones in her body LOL*.

As I said all authors are really kind and we got to meet Dhonielle Clayton, Sally Green, Akemi Dawn Bowman, Melinda Salisbury, Estelle Maskame, M.A. Bennett ….

One author that I didn’t meet but seemed super friendly, bubbly and friendly was Non Pratt. She was so energetic and welcoming it made me want to read her books!!!

Have you read her books or met her?

What are ticketed authors?

Well they are the reader’s plague!

When an author has so much success that a huge line of reader worms through YALC *seriously it begins all straight then as it reaches a wall it looks more like a snake than anything else* the organisers decide to “ticket” the author meaning: they leave the first 20 to 30 people in the line and give tickets with numbers to the other people yet in the line or coming to see the author.

Last year when you entered YALC you went to get your ticket for ticketed authors of the day.

Meaning: if you were an early riser you got to see all ticketed authors if you wanted to.

This year they changed the organisation.

No author was ticketed “right from the start”.

It was when the line was judged big by the organiser’s standard that they gave tickets.

You could think: OK but if you get really early in the line there is no problem.

Yes for the first authors of the day as you have boards with their name above their signing table. You know where they sign and enter the line.

The other authors only have their names “sticked” to the wall fifteen minutes before the signing.

If it already has a line in front of the table where they’ll sign you are screwed *sorry but it’s true!*.

That’s what happened to me with Tomi Adeyemi.

I rushed to the place where her name was just plastered on the wall just to get a ticket number 208 (I kid you not!) because a line was already existing.

What can you do? BE SMART!

We tried to strategize with my daughter, speculating based on the plan and the schedule where the author would probably sit and we stayed in the vicinity.

We also tried to peek above the table, on the ground behind the signing authors as the name of the following author laid on the ground, ready to be sticked to the wall. Unfortunately, this worked only Friday as I think the organisers got our trick.

We used another method: spread our forces! She would wait in the first half of the room and me in the second half, phones at the ready. As soon as one of us knew where the author would sign we sent SMS *thank God there is no longer extra roaming costs in Europe!*.

I often rave about the support the blogging community offers every day. Well readers are also very helpful and kind!

The first day I was in line to see one author and the line was extra long! I also wanted to get a book signed by Ed McDonald as many bloggers raved about his Raven Mark’s series. I bought Black Wing especially for YALC and …despaired to have my book signed as his signing time would soon come to an end!

That’s when a very sweet guy attending YALC with his girlfriend and fan of Ed spotted my book and proposed to have my book signed!

That’s how two minutes later I got my book back with Ed’s signature.

The second day I told you that I wanted to meet Tomi Adeyemi but got the ticket number 208 * translate in no way would I have my book signed*.

I pleaded with the organiser telling her we came from Belgium and had no such signing events in our country but to no avail. I can’t fault the girl really she could not favor me of course. That’s when two charming girls proposed to have my book and fanart signed. They were number 22 and promised to ask Tomi to dedicate the book.

Once again I asked for nothing but got plenty!

The third day I only wanted to meet Vic James and Akemi Dawn Bowman.

Vic James signed from 1 PM to 3 PM and Akemi began at 2 PM. The line for Vic James was short before us maximum 15 people. Plenty of time to see Akemi I thought. Wrong!

I told you Vic is VERY chatty! That’s super sweet and really interesting but soon the line was forming to see Akemi and I still had 10 people to go before me! My daughter offered to go to Akemi’s line and wait for me.

But Akemi began signing FAST and I still had 4 people in front of me before meeting Vic while my daughter was the next in line!

That’s when two French ladies waiting just behind me offered to keep my place telling me I had lots of time to meet Akemi and come back. They were right.

So today I want to shout THANK YOU to these people.

I hoped to get some ARCs but …got none!

You could either win them entering contests *what I did but wasn’t drawn* or snatch them if you attended early every day *what we did not as we visited London before and after our “YALC day”. It was a choice but know what you can do to get some if you attend next year.

Now if we speak of bookish goodies like pins, candles, fanart etc….I got plenty!!!!!

You either have excerpt of future books or pins or …

As far as candles go I bought 5 candles and my daughter 3 from “Bookish Burns” and they are just gorgeous. They also smell so good!!!

The fanart was exceptional and we both got posters of Rhysand with Feyre. I got a lucious poster of Zélie from Children of Blood and Bones and a bookmark with Feyre.

Bring lots of cash at YALC because the books cost half the price if not less! Many editing houses priced 3 paperback for 10 GBP and one hardcover for 10 GBP.

My haul was huuuuuuuuge! 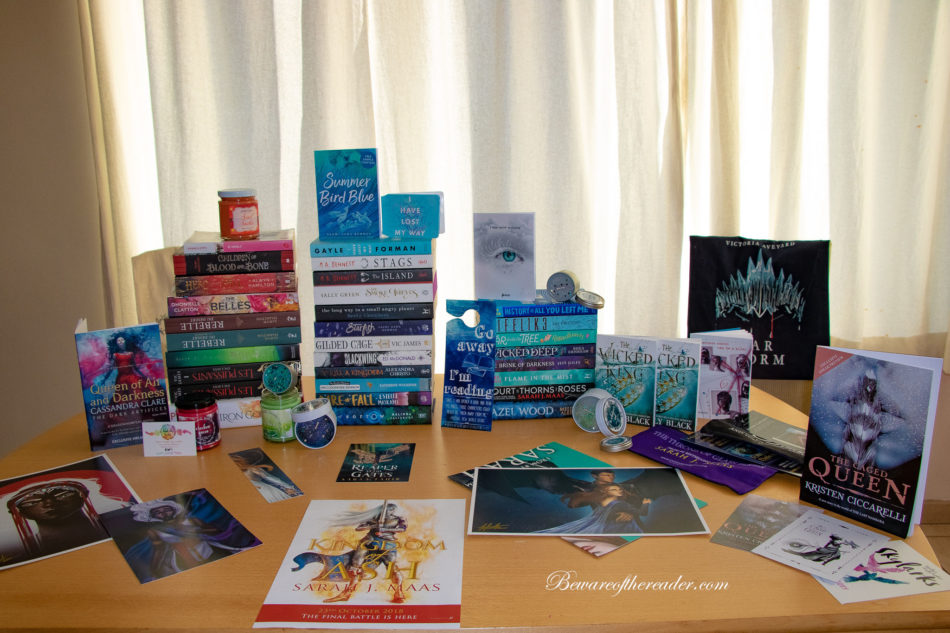 5) Why I phoned the hotel reception desk at 3:30 AM or when London’s streets are a jungle!

On Saturday night I was suddenly awakened by a woman’s shouts on the street. Our room was on the third floor yet I heard “Don’t touch me! Don’t touch me!” several times.

The woman was really shrieking and shouting.

I went to look at the window and spotted two guys and a woman on the street below. One of the man seemed to be waiting but the woman was furious at the second one. He was pacing back and forth visibly upset.

Maybe she was drunk or drugged. Maybe he was too. Maybe …

But at one moment he slapped her so hard that she fell from the stairs she was standing, going above a gate behind her and fell hard on her head in the street!

That’s when I said “Oh Hell no!” and phoned the reception asking they call the police, explaining everything I had witnessed.

I rushed to put on some clothes and with my bed hair I came downstairs. Luckily they were two at the reception desk, one woman stayed behind the desk and had called the police, one man was posted close to the window, monitoring what happened outside.

No words from the police so I guess things calmed down but as I said to the hotel clerks I hope if one day my daughter or myself shout “don’t touch me” someone will help.

You’ll probably get one shorter post about the two discussion panels I attended at YALC in the coming days/weeks.

Question for you: what would you do if you heard a womand screaming “don’t touch me”?