RITA® Award Winning author Alexis Daria brings readers an unforgettable, hilarious rom-com set in the drama-filled world of telenovelas—perfect for fans of Jane the Virgin and The Kiss Quotient. 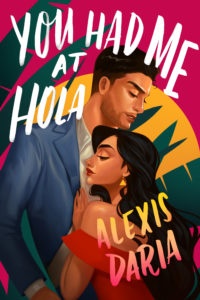 Leading Ladies do not end up on tabloid covers.

After a messy public breakup, soap opera darling Jasmine Lin Rodriguez finds her face splashed across the tabloids. When she returns to her hometown of New York City to film the starring role in a bilingual romantic comedy for the number one streaming service in the country, Jasmine figures her new “Leading Lady Plan” should be easy enough to follow—until a casting shake-up pairs her with telenovela hunk Ashton Suárez.

Leading Ladies don’t need a man to be happy.

After his last telenovela character was killed off, Ashton is worried his career is dead as well. Joining this new cast as a last-minute addition will give him the chance to show off his acting chops to American audiences and ping the radar of Hollywood casting agents. To make it work, he’ll need to generate smoking-hot on-screen chemistry with Jasmine. Easier said than done, especially when a disastrous first impression smothers the embers of whatever sexual heat they might have had.

Leading Ladies do not rebound with their new costars.

With their careers on the line, Jasmine and Ashton agree to rehearse in private. But rehearsal leads to kissing, and kissing leads to a behind-the-scenes romance worthy of a soap opera. While their on-screen performance improves, the media spotlight on Jasmine soon threatens to destroy her new image and expose Ashton’s most closely guarded secret.

This was a “bookstagram made me do it” buy. And I am glad I did it.

With the current situation and the general doom and gloom, that story was exactly what I needed to read!

It’s romantic, light, not overtly angsty and with both MC being what I’d call cinnamon characters. It’s filled with quick remarks and a side of hotness too! Added bonus: the narrator was excellent and I learned some fun facts about “telenovelas” and “soaps”.

Jasmine is a “soap opera darling” and at the beginning of the story, she has her face splashed in every tabloid and social media as her Rockstar of an ex-boyfriend broke up very publicly with her.

Jasmine has a track record of heartbreaks and making bad love choices. But she just wants to be loved. Is it something bad?

“Jasmine did trust easily, and look where it had gotten her. She could see now it was a direct response to feeling ignored and misunderstood by her parents and siblings. It was why she’d readily given her heart to every semi-attractive man who’d even shown her an ounce of attention. She sought her parents’ love by securing romantic relationships, because in her family, that was what made you a success. But that wasn’t healthy. And trust wasn’t meant to be given in one lump sum. It was earned, little by little. »

Boosted by her two cousins, she is determined to turn a new page and be a “leading lady” who does not need men to be great and feel good in her own skin.

No more coworker crushes for Jasmine!

She’ll focus on her next role that has the potential to send her into stardom!

That’s before Ashton comes into her life.

At thirty-eight and prodigal actor of Telenovelas Ashton has been killed in the last episode of his yearlong TV series and is now wondering if he is getting too old for his big break.

When he is offered the role of Jasmine’s ex husband he does not hesitate.

Ashton is what you could call a recluse or rather, a guarded man. Very protective of his privacy despite his public job. Not mingling with the cast he is going back to Puerto Rico any chance he gets to be among his family.

That does not bode well to create the needed chemistry between Jasmine and Ashton.

I just had a good time listening to that audiobook as Jasmine is really trying to change, to become stronger on her own and that was admirable. She is fiery, straightforward, sensual and also a sweet person, down to earth and no diva at all!

Her big family had me laughing, especially her cousins. I love stories with big families, even if Jasmine’s parents were less than impressed with her wish to make career and would rather have preferred her being married and having babies.

Ashton was a cute character. He is sexy, charming, considerate even if sometimes he is clumsy in his relationship. He also was very endearing with his vulnerability. He worried about his future in an industry favoring young actors. He worried about protecting his family from crazy fans. And he didn’t think he had anything to offer to Jasmine despite their undeniable attraction.

If you want a romance on the sweet side with a zest of spice, filled with likeable characters, great chemistry and personal growth, don’t look further. This is steamy, sassy, cute and has great banter. What to ask for to spend a great time reading right?

Have you read that one already?